One of the most colorful of the Founding Fathers, Benjamin Franklin was also among the most influential.

Even in these politically divisive times, American Democracy owes an incredible debt to the Founding Fathers. These men were far from perfect, in fact, history has disclosed a good deal in many of their legacies that would be questionable by today's standards. Their individual and collective bravery and willingness to sacrifice for what they saw as the Common Good, however, are the foundation of what became the leading nation of the modern world. 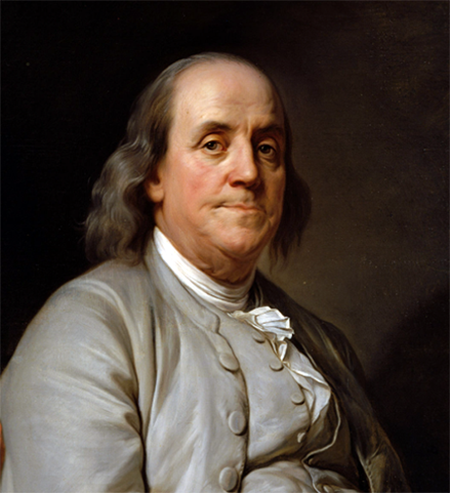 Of all the Founders, Benjamin Franklin is, perhaps, the most American. Very much a self-made man, Franklin embodied the industry and work ethic of New England Puritanism without being trapped by its prejudices and sense of moral superiority. He also embraced the ideals of the Enlightenment while avoiding most of its dangerous excesses.

Ben was the tenth of seventeen children fathered by Boston soap and candle maker Josiah Franklin. Josiah's business was more than moderately successful but raising seventeen kids puts a strain on resources. Ben's father had hoped that the boy could pursue a ministry but could only afford for him to attend two years of school. So Ben was indentured as an apprentice to his older brother, James' printing shop.

This exposed young Ben to the world of books, which he enjoyed immensely, but brother James was not the kindest of taskmasters. The printer began publishing a newspaper, The New England Courant, and Ben thought he could write for it. James thought otherwise. Secretly, Ben began writing letters under the nom de plume "Silence Dogood" and James published them. When Ms. Dogood's articles proved to be the paper's most popular feature, Ben let the cat out of the bag, for which his older brother had him beaten.

Young Ben's pride would not stand such abuse, so he ran away (a highly illegal offense) to Philadelphia at the age of 17. According to legend, when he arrived in the City of Brotherly Love, Franklin had only enough money to buy a few rolls, but he soon found work as a printer. His talents were such that he not only became one of the city's best printers but was also able to open his own print shop.

Although his business kept him engaged, Franklin never lost his love of books and reading. However, books were rare and expensive, so, along with a group of like-minded young businessmen, Franklin came up with the idea of a subscription library where funds would be collected, books bought and shared among the members. Thus was the Library Company of Philadelphia founded in 1731.

In 1729, Franklin began publishing The Pennsylvania Gazette which would become one of the most influential newspapers in the Colonies. At the end of 1732, The Gazette announced the publication of Poor Richard's Almanac which also proved incredibly popular and profitable. Although he would never seek elected office, Franklin became involved in politics, first locally in Philadelphia. He led a crusade to pave and light the city's streets and helped to form the Philadelphia Union Fire Company (Ben's admonition that "an ounce of prevention is worth a pound of cure" was fire safety advice).

Franklin was successful enough in his printing and publishing endeavors that he could franchise most of the business for others to run. By the age of 42 in 1748, he had become "a gentleman of leisure" and able to pursue whatever interest struck his fancy. These included his scientific interests, including the nature of electricity, and inventing. Famous Franklin innovations include the Franklin Stove, which he intended as a public benefit and did not seek a patent for, the lightning rod, bifocal glasses, and even a pair of hand-fins to make swimming more efficient. Most of Ben's retirement focus was on public service, however.

As a representative of the Pennsylvania Assembly, Franklin traveled to London in 1757, where he would take up primary residence until 1775. His original mission to the British capital was to settle disputes involving the Penn family, the founders of the Pennsylvania colony. He would also represent other Colonies as their Agent to the Crown and testified before Parliament against the Stamp Act of 1765 and eventually getting the Act repealed. 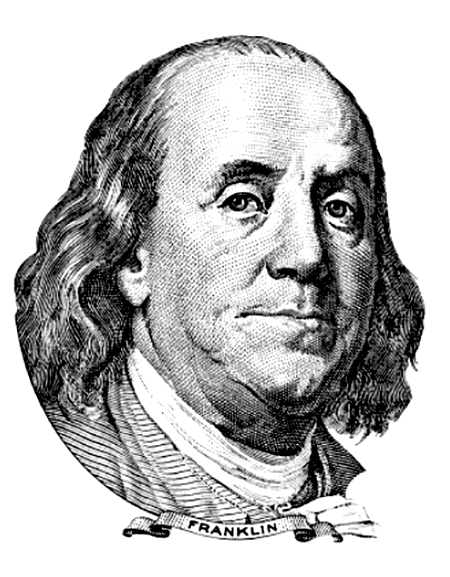 Among Franklin's London acquaintances were several men of science, and London became his base for European travels. However, it was becoming obvious that Revolution was coming to the Colonies and Franklin knew his welcome in London would fade. The earliest skirmishes of the Revolution had already broken out by the time he returned to Philadelphia in May 1775, and the Pennsylvania Assembly unanimously selected him to be their representative at the Second Continental Congress.

The Congress convened on May 10, 1775, in Ben's hometown of Philadelphia. This often fractious assembly took on the duties of guiding a Revolution as well as governing the new Nation. Among other tasks, Franklin was appointed to the Committee of Five who would draft the Declaration of Independence. Franklin's health prevented him from attending most of the early meetings and most of the writing would fall to Thomas Jefferson. However, Ben did make "small but important" changes to drafts sent to his bed. Fully aware of the potential costs of their endeavor, when the Declaration was signed Franklin quipped, "Yes, we must, indeed, all hang together, or most assuredly we shall all hang separately."

In December 1776, Franklin was dispatched to Paris to represent the Congress. He would not only serve the Revolution but had a terrific impact on French Society. Often appearing in rustic garb and a fur cap, he came to typify the Noble Frontiersman that Franc sought to support. As a member of La Loge des Neuf Sœurs, Ben helped to further the cause of Freemasonry in Paris, and the Lodge became a supportive base of the American Revolution.

Franklin's most important accomplishment while in Paris may have been securing a military alliance with France. Granted, convincing the French to commit to nettling the British would have been an easy sell, but the infusion of troops, supplies, and money would prove vital to the American cause. Franklin helped draft the Treaty of Paris, which was signed on September 3, 1783, bringing an end to the Revolution and recognizing the United States as a sovereign nation.

When Franklin returned to America in 1785, his contributions to the Revolution were considered second only to those of George Washington. He would serve as a delegate to the Philadelphia Constitutional Convention in 1787, but the position was largely honorary and he would seldom engage in debate. Benjamin Franklin succumbed to pleurisy at his home in Philadelphia on April 17, 1890. He was 84.