She was said to have “the most beautiful face of film noir” during the 1940s and 1950s” and some gave her the title as the Queen of Noir.

Choose your CD format
or order disks individually: Add to Cart Add to wishlist
Play a sample episode from January 07, 1946:

"Lux radio: So You Came ALong" 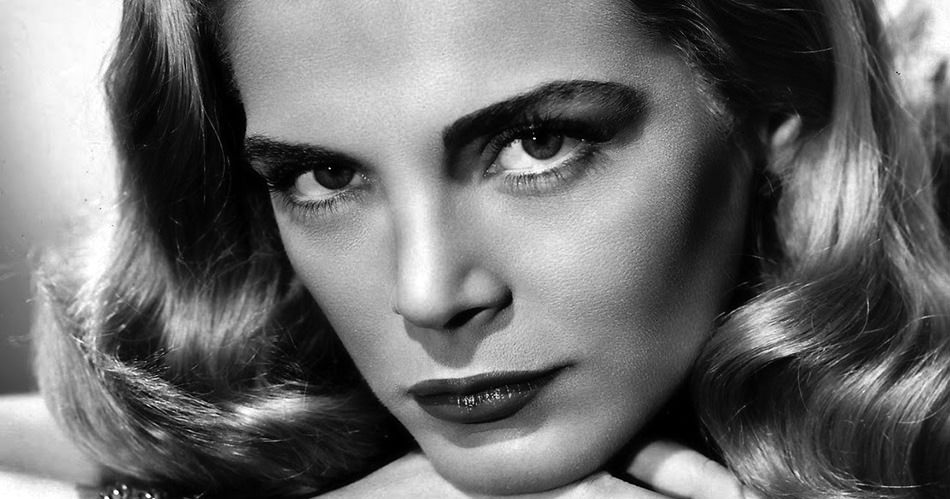 They called it film noir, a French term that means "Black Cinema". It referred to the dark and downbeat feel of American crime dramas that were being released after the War. They were peopled by hard-boiled detectives, disillusioned cops, and desperate men. The one bright spot in many of these films was a pretty girl or two. Sometimes the pretty girl would be a damsel in distress, but more often she was a femme-fatale. 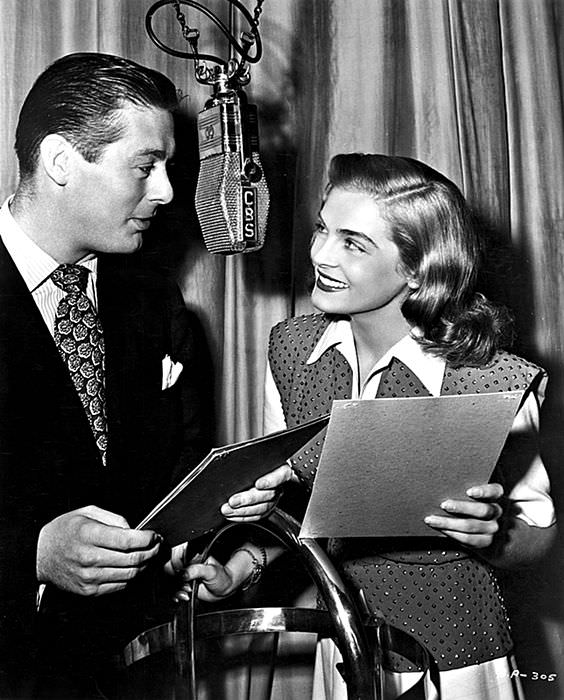 Of course, it was all an act, and many actresses coveted femme-fatale roles because they took them out of a "goodie-two-shoes" career path that the Studio System set them on. A few seemed destined to play the bad girl roles, and it helped to sell tickets if there was some real-life scandal to spice things up.

Lizabeth Scott was said to have "the most beautiful face of film noir" during the 1940s and 1950s". She is most often compared to another beauty, her contemporary, Lauren Bacall. Scott's and Bacall's careers paralleled one another in many ways. Both studied acting in New York and turned to fashion modeling to make ends meet. Both were slender blonds known for their husky voices who would make it big in Hollywood thanks to the support of older men who became infatuated with them.

In Bacall’s case, talent agent Irving Hoffman got her on the cover of Harper’s Bazaar, then Howard Hawks took her under his wing. Hawks gave her voice lessons (resulting in her "smoky, sexual growl") and gave her the part that got her started in To Have and Have Not (1944). It was the chemistry between Bacall and her co-star, Humphrey Bogart, which made the film an instant classic, but Hawks felt betrayed when Lauren and Bogart genuinely fell in love.

A few months after Bacall's success on the cover of Harper’s, Irving Hoffman tried to repeat his triumph with Lizabeth Scott. He introduced her to Hal B. Wallis, one of Warner Bros up and coming producers, at a party at the Stork Club. Wallis set up a meeting with Scott, who was a couple of years older than Bacall and perhaps a bit more professional already. She initially accepted the meeting but then declined when her career took a sudden turn.

Born Emma Matzo, September 29, 1922, to the immigrant owners of Matzo’s Market in Scranton, Pennsylvania, the oldest of six kids grew up in an environment steeped in all things cultural and musical. In the first grade, she was to an elocution school which broke her from her Northeast Pennsylvania dialect and helped her to develop a Mid-Atlantic accent. Her deep voice she attributed to genetics, her sisters shared her deep tone. 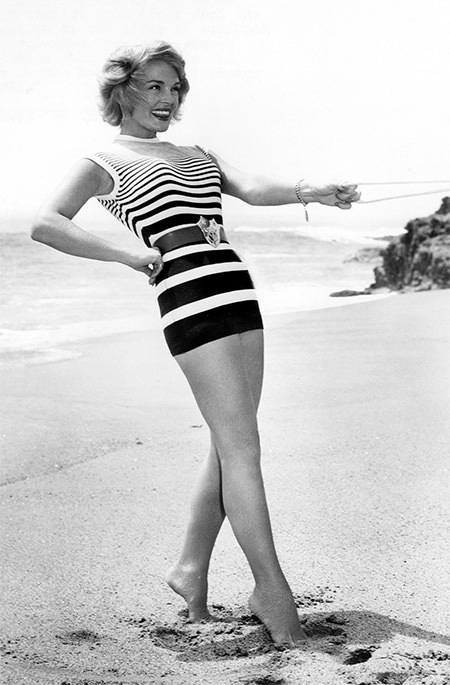 Emma took part in juvenile productions growing up, and at 17 she convinced her parent to allow her to attend the Alvienne School of the Theatre in New York City, well chaperoned at the Ferguson Residence for Women. Part of her reading at the school was a play about Mary, Queen of Scots and Elizabeth I, and she took Elizabeth Scott as a stage name. Her first professional job was part of the road company for the Hellzapoppin musical revue.

In 1942, she joined a "subway circuit" summer stock company where she won enough recognition to be hired as Tallulah Bankhead’s understudy as Sabrina in Thornton Wilder’s The Skin of Our Teeth. Miss Bankhead was incredibly resentful at being understudied (when the show opened, Tallulah was 40 and Scott 20). Producer Michael Myerberg used Scott to control Bankhead to a certain extent, but she never got a chance to play Sabrina when Bankhead was with the show. When Bankhead chose not to renew her contract, the part of Sabrina was given to Miriam Hopkins.

When she was passed over to replace Bankhead, Scott quit the show and tried fashion modeling with Irving Hoffman. The night she met Hal Wallis she returned home to find a telegram asking her to come to Boston and replace an ailing Miriam Hopkins as Sabrina. While on the train to Boston, she decided she needed a more unique stage name, and dropped the E to become Lizabeth.

Afterward, she went back to modeling and just like Bacall before her, she received an invitation to Hollywood for a screen test. The agent who paid for the trip was the same one who had just signed Lauren Bacall, who was about to start shooting her first movie. The trip took place during the excitement of the 1944 Oscars, and Lizabeth was largely forgotten in her hotel room.

Hal Wallis had been feuding with Warner Bros for some time. The problem came to a head at the Oscar Ceremony. The statuette for Best Picture is traditionally accepted by the film’s producer, but when Casablanca was announced as the winner, studio head Jack Warner beat producer Wallis to the podium and accepted the award. Wallis was understandably livid.

Lizabeth finally got in contact with the agent who arranged a screen test with Warner Brothers. Jack Warner rejected her, supposedly attempting to block a rivalry between her and his new starlet, Lauren Bacall. Wallis did see Lizabeth’s potential, and since he was moving to Paramount, he was excited to offer her a contract. 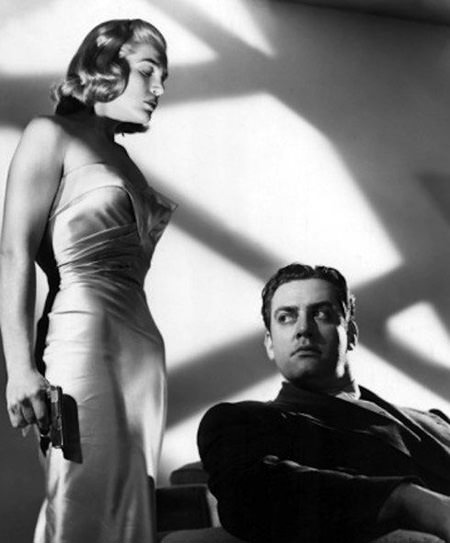 Lizabeth was allowed to sing in her first picture, a post-War screwball comedy You Came Along (1945) in a role written for Barbara Stanwyck. Paramount’s publicity department made the most of the song by billing Scott as "The Threat", implying the danger her Hollywood career would have to The Body (Marie McDonald), The Voice (Sinatra) and The Look (Lauren Bacall). Scott hated the title but admitted that "bad girl roles" came easier for her.

Wallis took a more active interest in Scott’s image in her next film, The Strange Loves of Martha Ivers (1946), this time co-starring with Barbara Stanwyck. Producer Wallis supposedly insisted that some scenes be reshot to better highlight his protégé. In The Lady From Shanghai (1947), Lizabeth was cast opposite her supposed rival’s husband, Humphrey Bogart (both Rita Hayworth and Bacall had turned down the role). Both Bacall and Scott would make Bogey’s list of "nine most potent kissers" in movie scenes.

Scott shared a "hard-boiled" quality with other actresses who emerged in the forties, such as Ida Lupino, Lana Turner, Rita Hayworth, Bacall, and Ann Sheridan. They were a step beyond the wise-cracking platinum blonde of just a few years previous, with a sharp sense of fashion and an air of "I don’t really need a man" toughness. With films like Desert Fury (1947), I Walk Alone (1948), Pitfall (1948), and Too Late for Tears (1949), Lizabeth solidified her title as the Queen of Noir. However, although she continued to work steadily, she and Wallis squandered opportunities to solidify her hold on stardom through the 1950s. In 1957, she starred with Elvis Presley in Loving You, after which she retired from movies.

She later recalled: "... out of the clear blue sky one morning, I woke and decided that I never wanted to make another film again. It was just a spark, I can't explain it."