She was the favorite pin-up girl of American GI's in WWII, an incredible dancer, and Hollywoods first official princess.

Choose your CD format
or order disks individually: Add to Cart Add to wishlist
Play a sample episode from February 13, 1943: 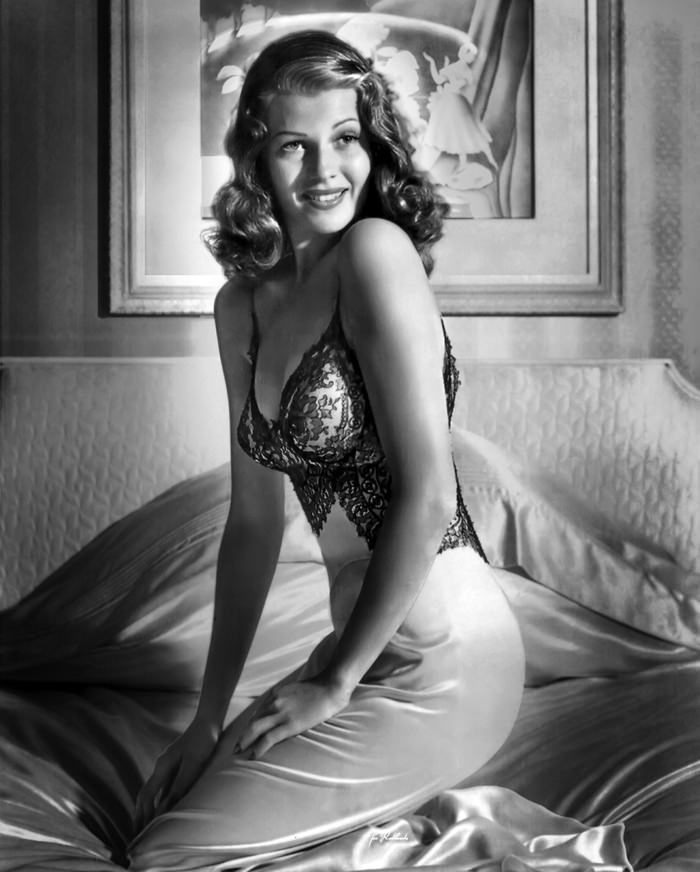 If you asked a typical GI what he was fighting for on the eve of a great battle like the Normandy Invasion or landing on Guadalcanal, more than a few of them would have probably pointed at the pin up picture they kept of Rita Hayworth from the August, 1941, issue of Life magazine. 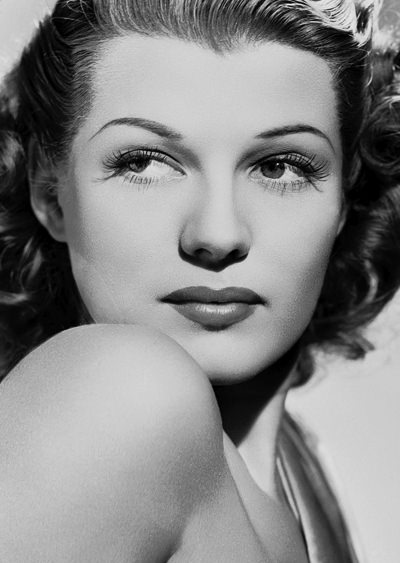 Whether Ms. Hayworth typified "the girl back home" will be endlessly debated, there is no denying that she was beautiful. However, it was a beauty defined by what others thought she should be.

Margarita Carmen Cansino was born to a family of dancers in Brooklyn on October 17, 1918. Her mother, Volga Hayworth, had been a Ziegfeld girl, while her father, Eduardo Cansino, Sr., was the son of a bolero school founder in in Madrid. Little Rita had her first dance lesson from her grandfather when she was three, and the lessons became the dominant memory of her childhood.

Eduardo Sr. moved the family to Hollywood in 1927, expecting his style of dance to be the next big thing in the movies. The Great Depression made dancing lessons an unnecessary extravagance, and the studio and all Eduardo's investments were lost. However, he saw in his daughter an ideal dance partner for the nightclub circuit. Rita was too young to work in Los Angeles clubs, but the pair was a hit in Tijuana.

It was there that Rita caught the eye of a Fox Studio talent scout, and she was given a six month contract. During this time Fox merged with 20th Century and new studio head Darryl F. Zanuck thought that Miss Cansino was "too exotic" and let her go at the end of her contract.

Rita's soon to be husband, promoter Edward Judson (who was nearly as old as her father) got her a screen test with Harry Cohn of Columbia Pictures. Cohn saw Rita's potential, although he too felt she appeared "too Mediterranean", and signed her to a long term contract.

At the time, Columbia did not have a glamorous "Star", and set out to put Rita into that role. She adopted her mother's maiden name to play up her British-American ancestry,

underwent electrolysis to broaden her forehead and dyed her dark hair red (Rita would have eight different hair colors through her film career).

Cohn pressured Howard Hawks to cast Miss Hayworth in a small but important role as a man-trap in his aviation film Only Angels Have Wings (1939) with Cary Grant and Jean Arthur. The film was a the source of Cary Grant's catch phrase "Judy Judy Judy" in reference to Rita's character, and the Lux Radio Theater adaptation is featured here.

Rita's star was rising. In 1940 she made her first of five appearances on the cover of Life. She appeared in The Strawberry Blonde (1941) with James Cagney and Olivia de Havilland and Blood and Sand (1941) opposite Tyrone Power. She danced with Fred Astaire for the first time in You'll Never Get Rich (1941), and went on to be one of six women who danced with both Astaire and Gene Kelly.

In 1942, Rita was granted a divorce from Judson under a complaint of cruelty. She later admitted "He helped me with my career...and helped himself to my money". Rita was penniless after the divorce and forced to beg meals from friends.

In September of 1943, Rita married Orson Welles in a simple civil ceremony. The bride wore a beige skirt and ruffled white blouse, and the couple was back at work at the studio within hours of the ceremony.

Rita did her part for the War Effort, not only as one of the most popular pin up girls, but also making the rounds of servicemen shows with Bob Hope and AFRS programs like Command Performance, GI Journal and Mail Call. On the Burns & Allen Program, she and Gracie did a send up of her marriage to Welles, commiserating with Gracie about living with a "genius", and appeared in her most famous movie role, Gilda (1946).

Ms. Hayworth's reputation as a "bombshell" was so universal that her image was supposedly affixed to one of the atomic bombs tested at the Bikini Atoll. Mr. and Mrs. Welles were incredibly upset over the news.

Although Orson Welles and Rita Hayworth did have a daughter, Rebecca, the five year marriage was not as happy as was hoped. Welles regretted the marriage, saying that his was not a personality to create a home life. Welles directed his wife in Lady From Shanghai (1947). The film was critically acclaimed but tanked at the box office, in part because Welles cut off Rita's red curls and gave her a platinum dye job. 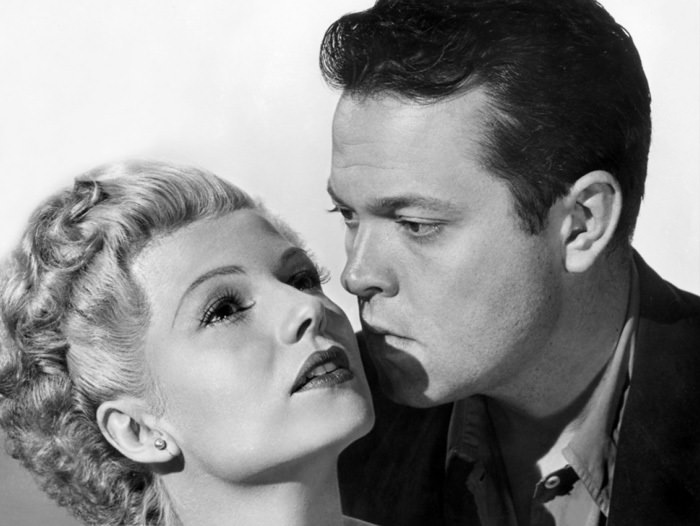 Rita met Prince Aly Khan at Cannes in 1948, and after a scandalous courtship they were married on May 27, 1949. This made Rita Hollywood's first official princess, unfortunately the gossip columns were abuzz with the fact that her divorce from Orson Welles was not yet finalized. Her studio, Columbia, was upset that she was refusing scripts, as well as being scandalized over her behavior with Khan.

Aly Khan was an international playboy and acted the part. When Rita sought a Nevada divorce from him there was a bitter custody dispute over their daughter, whom Rita wanted to raise as a Christian American. The divorce was finally filed in 1951 on the grounds of extreme cruelty and mental hardship.

A Star on the Hollywood Walk of Fame at 1645 Hollywood Blvd honors Rita Hayworth. 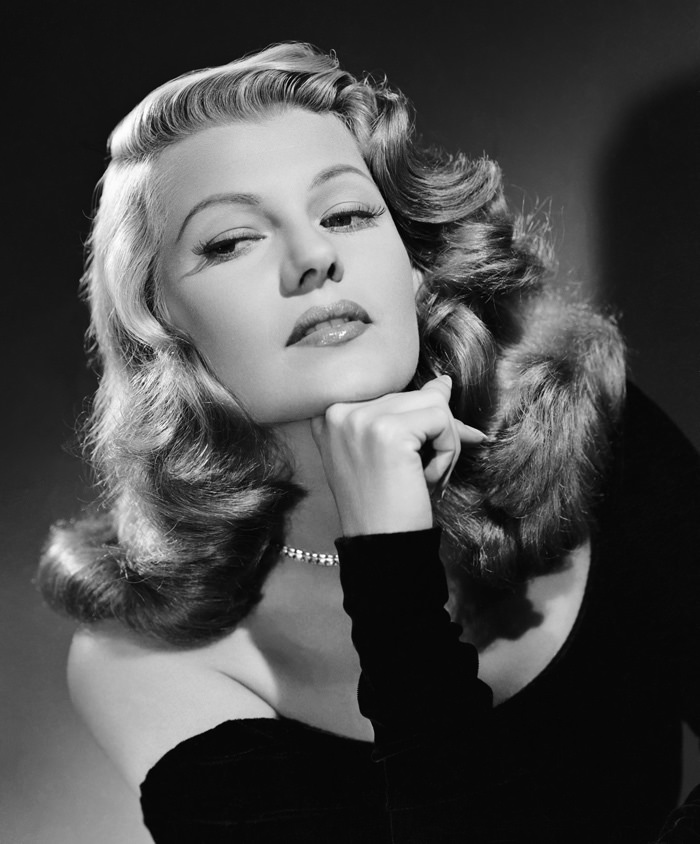