Colin Powell was an American politician, diplomat, and 4-star general who served as secretary of state from 2001-2005. 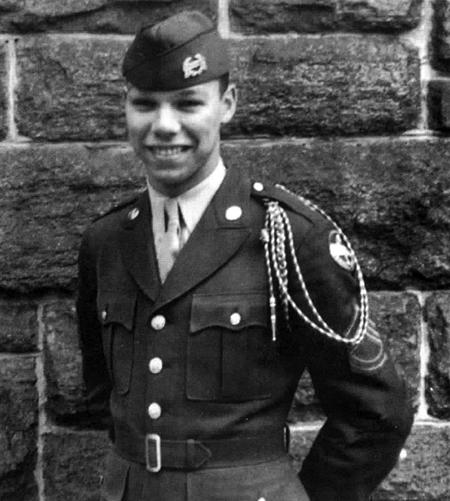 He was born of immigrant parents, born in New York City, and raised in the South Bronx.  The American Journey that Colin Powell was one that was unthinkable for a man of color born in 1937 could have.  But, despite all of the barriers of the times, Colin Powell would have an  unprecedented career of public service over a four decade span.

After graduating from the New York Public School System, Powell enrolled in classes at  City College of New York.  He would  earn a bachelor's degree in geology.

While at CCNY; Powell was enrolled in their ROTC program where upon graduation in 1958 he earned the commission of Army second lieutenant.  For the next thirty-five years Colin Powell would have a military career that earned him by the time of his retirement in 1993 he was a four star general.

Colin Powell would begin his thirty-five year military career while attending City College of New York when he was enrolled in the school's Reserve Officer's Training Corps.  of the experience with ROTC, Powell explained it by saying, "It was only once I was in college, about six months into college that I found something that I really liked, and that was ROTC, Reserve Officer's Training Corps in the military.  And I not only liked it, but I was pretty good at it.  That's what you really have to look for in life, something that you like, and something that you think you're pretty good at.  And if you can put those two things together, then you're on the right track, and just drive on."

The group that he joined while doing ROTC was the Pershing Rifles; a fraternal order and drill team that was started by General Pershing. 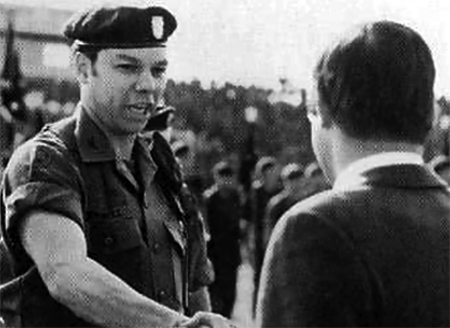 Upon his graduation in 1958, Colin Powell was commissioned as an Army second lieutenant, but the military had only been desegregated not more than ten years by President Harry S Truman by Executive Order 9981.  The second lieutenant was sent down to Georgia for training at Fort Benning.  While in his military training, Lieutenant Powell was refused service at local bars and restaurants because of his skin color.  At this time, Georgia was part of the segregated Jim Crow South.  After his training, Powell would be assigned to the 48th Infantry in West Germany as a platoon leader.

By 1962, Powell was promoted to Captain and was doing the first of two tours in Vietnam.  In his first tour which was from 1962 to 1963, Captain Powell was a South Vietnamese Army Advisor.  While on patrol in a Viet Cong held area he stepped on a punji stake wounding him to the point that his foot would swell for a short time which shortened his first tour.

By the time of his second tour in Vietnam, Powell was now promoted to Major.  He would serve as an assistant chief of staff of operations of the 23rd infantry division.  Major Powell would survive a helicopter crash where he single handedly rescued three other people, including his division commander; Major General Charles M. Gettys from the burning wreckage.  For his bravery, Colin Powell was decorated with the Soldier's Medal.

On March 16, 1968  the My Lai Massacre occured.  In this event in South Vietnam, 347-504 unarmed Vietnamese civilians were murdered by American troops from Company C, 1st Battalion, 20th Infantry Regiment and Company B, 4th Battalion, 3rd Infantry Regiment, 11th Brigade, 23rd Infantry Division.  In his investigation of a letter written by Tom Glen of the 11th light infantry brigade where Glen backed up rumors of the allegations of the massacre; Powell wrote, "In direct refutation of this portrayal is the fact that relations between American soldiers and the Vietnamese people are excellent."  Later, Powell's statement would be considered "whitewashing" so that by May 2004 when interviewed by Larry King, Colin Powell said, "I was in a unit that was responsible for My Lai.  I got there after My Lai happened.  So, in war, these sorts of horrible things happen every now and again, but they are still to be deplored." 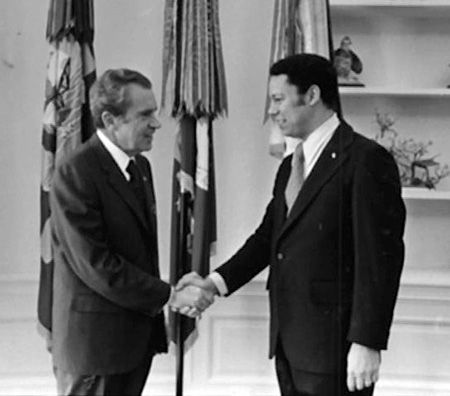 While stationed in South Korea as a lieutenant colonial, Powell grew a great affinity for General Henry Emerson.  In his book, MY AMERICAN JOURNEY, Powell would describe General Emerson as "one of the most caring officers" that he had ever met.  Emerson would make the troops train at night to fight a possible North Korean attack.  To promote racial harmony, Emerson made the troops watch the movie, Brian's Song repeatedly.

When he returned from Vietnam in 1971, Powell would attend George Washington University where he earned a Master of Business Administration degree.  From 1972 to 1973 he was a White House Fellow in the Richard Nixon administration and from 1975 to 1976; Powell attended the National War College.

In 1980, America ushered in a new conservative era with the election of Ronald Reagan as president.  At the time, Powell was stationed at Fort Carson, Colorado where by 1983 was serving in the Reagan administration under Secretary of Defense Casper Weinberger.  Powell would assist Weinberger in the 1983 invasion of Grenada and the 1986 airstrikes on Libya.  Powell was also involved in the unlawful transfer of TOW anti-tank missiles and Hawk anti-aircraft missiles from Israel to Iran.  This would later be known as the Iran-Contra affair.  Back in 1985, Powell reported to the secretary of defense that the transfer of hawk missiles from Israel to Iran without Congressional notification was a clear violation of the law.  When these actions were investigated by the independent council, Lawrence E. Walsh, Powell had given incomplete answers concerning notes that had been withheld by Weinberger.  After Iran Contra, Powell would serve as Ronald Reagan's National Security Advisor from 1987 to 1989.  Powell was able to retain his commission of lieutenant general. 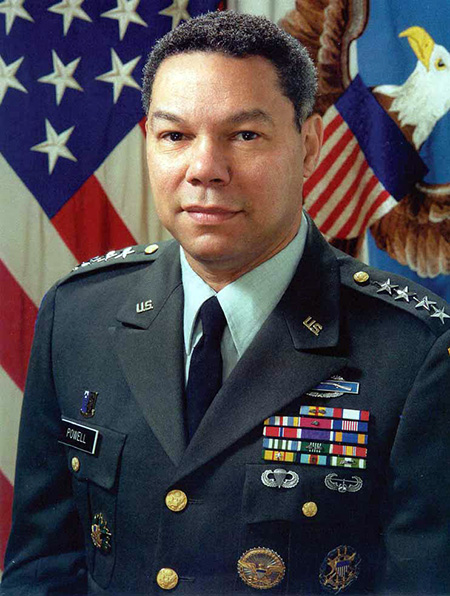 By 1989, Colin Powell was promoted to a four star general, being only the third after Dwight D. Eisenhower and Alexander Haig after World War II to be promoted to this rank without serving as a division commander.  At the time he was stationed at Fort McPherson where he oversaw the Army, Amy Reserve, and National Guard units in the continental United States as well as Hawaii and Puerto Rico.  He would later be named by George HW Bush as the Chairman of the Joint Chiefs of Staff.

From October 1, 1989 until his retirement on September 30, 1993; Colin Powell would serve as the 12th Chairman of the Joint Chiefs of Staff.  At the age of 52 he became the youngest chairman to hold that position as well as the first Afro-Caribbean American to hold that position.  He was also the first chairman to receive his commission through ROTC.

In his tenure as chairman of the Joint Chiefs, General Powell oversaw 28 international crises with the two main ones being the 1989 invasion of Panama that removed Manuel Noriega from power, and the 1991 Persian Gulf War.  Powell would earn the nickname of the Reluctant Warrior at this time.

Because of his popularity with both political parties, Colin Powell was the man that the Democrats and the Republicans wanted to claim as theirs.  During the 1992 Election there was talk of him being the vice presidential candidate on the Democratic ticket with Bill Clinton as well as replacing the incumbent Vice President, Dan Quayle on the Republican ticket with George HW Bush.  He would declare himself as a Republican and campaigned for the Party in 1995 for the 1996 Election Cycle.

For a time, Colin Powell was being considered as a possible Republican candidate to challenge Bill Clinton in 1996.  The reason for this was the Republican's split conservative vote in Iowa and in New Hampshire leading in the polls among the potential Republicans for the nomination.  In November 1995, Powell declined a run citing he did not have a passion for politics.  There was again talk in 2000 to run Powell as a Republican for President but again, he lacked the passion for politics.  Once George W. Bush secured the nomination, Powell endorsed him for President.  He would in 2008 and 2012 endorse Barack Obama for president and Joe Biden in 2020.

When Colin Powell became George W. Bush's Secretary of State he became the highest ranking black American at that point only to match with Condoleezza Rice when she succeeded him as Secretary of State in 2005 and then being dropped from that distinction in 2009 when Barack Obama became president and in 2021 when Kamala Harris became Vice President.  As Secretary of State, Powell was considered a moderate and in his four year tenure in that position was the least traveled Secretary of State in thirty years.  After the September 11, 2001 Attack, Powell's main job as Secretary of State was managing the United States' relationships with foreign countries to secure a stable coalition in the War on Terror. 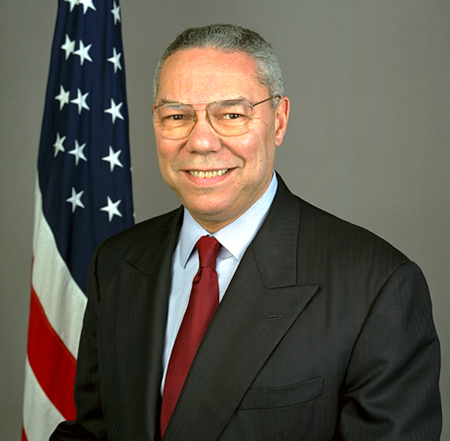 In the buildup to the 2003 United States invasion in Iraq, Colin Powell was tapped with the task to build the case in a Coalition of the Willing.  In February 2003, Secretary Powell pleaded his case at the United Nations…"My second purpose today is to share with you what the United States knows about Iraq's weapons of mass destruction.  Iraq's behavior demonstrates that Saddam Hussein and his regime have made no effort to disarm as required by the international community."  Powell continued to say, "Every statement I make today is backed by sources, solid sources.  There are no assertions.  What we're giving you are facts and conclusions based on solid intelligence."  In later years it would be proven that the information that the Bush administration was given and reported to the American people and the world was in fact false information.

In 2005, Colin Powell retired to private life but still stayed informed offering his council and opinion on such things as the nomination of Josh Bolton and advising Barack Obama in a troop surge in Afghanistan.  There was talk of taking General Powell out of retirement to serve in the Cabinet of Barack Obama.  He was never nominated.

Sadly, on October 18, 2021, Colin Powell passed away at Walter Reed due to complications from COVID-19 even though he had been fully vaccinated.  What was not reported at first was that General Powell was suffering from multiple myeloma; which compromised his immune system.  He also suffered from early stages of Parkinson's disease.

President Joe Biden, along with Jimmy Carter, Bill Clinton, George W. Bush, and Barack Obama released statements calling Colin Powell an American hero.  Donald Trump released a disparaging statement through the Office of the 45th President of the United States on October 19, 2021; "wonderful to see Colin Powell, who made big mistakes on Iraq and famously so-called weapons of mass destruction, be treated in death so beautifully by the Fake News Media.  Hope that happens to me someday.  He was a classic RINO ["Republican in Name Only"], if even that, always being the first to attack other Republicans.  He made plenty of mistakes, but anyway, may he rest in peace!"