This program was initially sponsored by Lear Radio Laboratories. Commentaries reached a high-water mark on July 28 when Welles reads and comments on an affidavit in the case of Isaac Woodard.

If radio had its own folk hero it would probably be Orson Welles. Like Casey Jones, Davy Crockett, Robert the Bruce, Wild Bill Hickok, Ned Kelly, Daniel Boone, or Sitting Bull, Orson Welles was a real person but many of his exploits seem larger than life. He was also known for butting heads with studio and network executives and while he was not always victorious in these encounters he rarely, if ever, backed down from a fight.

Welles came into the developing radio industry in the mid-Thirties as an established "whiz kid" from the world of the theater. Born into affluence, he had endured a surprisingly difficult childhood. His father made a fortune from inventing a type of bicycle lamp, and then drank away the family's wealth. Older brother Dickie had to be institutionalized for learning disabilities, and his mother had to play piano at the Art Institute of Chicago to feed her son. She died of hepatitis when Orson was just nine, and he was shuttled between various guardians. For three years he lived on the road with his alcoholic father, traveling to Jamaica and the Far East. In 1930, at the age of 15, Orson told his father that he would no longer see him unless he stopped drinking, and then the older Welles proceeded to drink himself to death. Orson blamed himself.

After his father's death, Welles used part of his inheritance to travel to Europe, and when his funds drew low he strode into a Dublin theater and proclaimed himself to be a big Broadway star. The obviousness of the lie did not escape the theater manager, but he was entranced by Welles' brashness and gave him a shot. However, he was unable to obtain a work permit and returned to America. He found a job acting on CBS's March of Time and soon became involved in the WPA's Federal Theatre Project. Welles directorial and production styles were either innovative or blasphemous, depending on your point of view. He was soon befriended and mentored by the great John Houseman, and together they formed the Mercury Theatre Company. Some of Welles' innovations included staging Macbeth with an all-Black cast, the farce Horse Eats Hat (1937), and the controversial political operetta The Cradle Will Rock (1938).

When the Federal Theatre Project closed, the Mercury Theatre Company turned to radio. Welles adapted and produced a two-part performance of Hamlet for CBS Radio Workshop in 1936, and The Mercury Theatre on the Air began as a sustained hour-long program on Sunday nights in 1938. At the end of October, the company presented an adaptation of H.G. Wells' War of the Worlds, placing the fictional Martian invasion in New Jersey. Although Welles reminded the audience several times that it was all play-acting, some members of the public supposedly believed that the broadcast, which used a false newscast as a narrative device, was reporting an actual event.

The War of the Worlds launched Welles into infamy, not only gaining sponsorship for his program (hereafter known as The Campbell's Playhouse) but also inspiring RKO Studios to offer him a two-picture deal with almost unlimited creative freedom (unheard of for an untried director). The first picture was the classic Citizen Kane (1941). Although the picture is now considered one of the greatest films ever made, it lost money at the box office upon its release. The story was based in part on Welles' own life experience but there was no mistaking that the despicable main character was a send-up of journalism magnate William Randolph Hearst. The power of the Hearst newspapers effectively killed the film until it was reevaluated by later generations.

While working on his second film of the RKO deal, The Magnificent Ambersons (1942), Welles was appointed a goodwill ambassador to Latin America by the Office of the Coordinator of Inter-American Affairs. The OCIAA's mission was to counter the spreading influence of the Axis Powers in South America and Welles was dispatched to Rio to film a documentary about the Carnival. While he was out of the country, the studio made a final cut and released Ambersons. Welles insisted that the unauthorized cuts "ruined" the picture and it lost money at the box office. 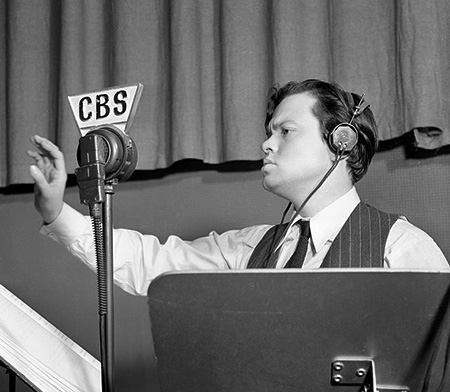 Other Wartime efforts included several on-air War Bond drives and the OCIAA sponsored Hello Americans on CBS, and the Lockheed Aircraft sponsored Ceiling Unlimited. Welles was declared 4-F, "unfit for military service" because of various health matters, but he worked on Command Performance, GI Journal, Mail Call, Stage Door Canteen, and Treasury Star Parade. He also produced and sponsored The Mercury Wonder Show, a nightly live extravaganza in heart of Hollywood that invited servicemen to attend for free while civilians had to pay to see the show. The Wonder Show introduced Welles to the fun of a variety program, and his next radio effort was The Orson Welles Almanac.

In 1945, Welles began Orson Welles Commentaries for ABC news. The program was initially sponsored by Lear Radio Laboratories (Bill Lear was a self-taught electronics pioneer who would go on to help create aircraft autopilot systems, avionics, radio direction finders, the Learjet, and the 8-Track Tape format). The episodes in this collection begin just after Lear dropped their sponsorship, complaining that the program was not gaining a larger audience.

The program began in September of 1945 with Welles revisiting some of the personalities who were part of his Latin American project. This collection begins on June 23, 1946, just days before the Office of Price Administration is due to be shut down. The Office had been established during the War to keep a handle on inflationary pressures on the home-front. Lifting the controls would benefit business tremendously by returning to a free market, but Welles believed that the unprotected consumer would face hardship and he used the pulpit of Commentaries to point out the dangers. The following week, in addition to protesting the shutdown of OPA, Welles expressed his disappointment that the atomic bomb about to be test detonated at Bikini Atoll was nicknamed "Gilda" and had a picture of his wife, Rita Hayworth, on the case. 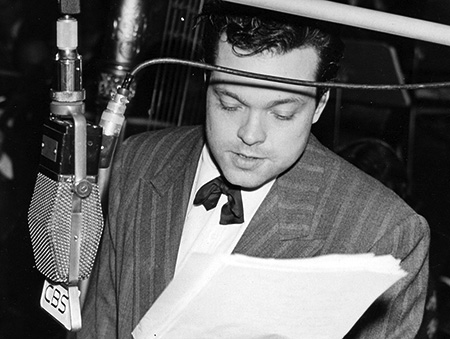 Lear Radio had been paying Welles $1,700 for the 15-minute broadcast each week. When they dropped their sponsorship, he began receiving just $50 per episode from ABC but seemed to be so enamored with the forum that he was not going to give it up. Commentaries reached a high-water mark on July 28 when Welles reads and comments on an affidavit in the case of Isaac Woodard. In a heinous hate-crime, Army veteran Woodard, a black soldier still in uniform having been discharged hours before, was forced off the bus he was riding home to see his mother by a small-town police officer in South Carolina. Woodard defended himself but gave no resistance to the officer who proceeded to beat the end of his nightstick into the decorated veteran's face until his eyeballs were destroyed. Welles had a long record of fighting racism, and his report of the Woodard incident sparked a national outcry. The officer involved was indicted but later acquitted by an all-White jury (African Americans were not allowed to serve on juries in South Carolina at the time). In the aftermath of the case, President Truman began pushing civil rights legislation at the federal level, a move which cost him some support in his 1948 reelection campaign.

Sometime after his fifth and final broadcast about the Woodard case on August 25, ABC informed Welles that they would no longer be able to sustain Orson Welles' Commentaries. The cancellation of Commentaries will be the last time Welles is before the microphone on one of his own shows. He will appear in syndication from London starring in The Lives of Harry Lime, a character inspired by his performance in the noir classic The Third Man (1949), and hosts the Scotland Yard tribute program, The Black Museum. To the movie industry, Welles will remain a misunderstood genius.

After taping his final interview for The Merv Griffin Show on October 9, 1985, Welles returned to his Hollywood home to type some notes for a film project at UCLA. Working well into the night, he succumbed to a heart attack in the early morning hours, he was 70 years old. A Star on the Hollywood Walk of Fame at 1608 Vine St is dedicated honoring Orson Welles' contributions to Motion Pictures, and his Star for Radio is at 6628 Hollywood Blvd.