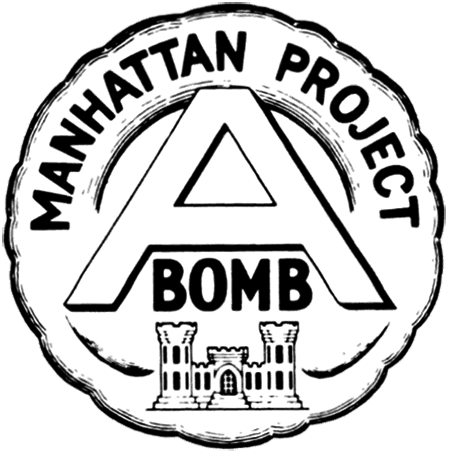 When looking at history, those of us living in the present and after the fact have a hard time with why certain events happened and what the result was.  That would be that we are using today’s logic to understand yesterday’s reason.

The greatest example of this and I have had arguments with loved ones and on social media about this topic; was the dropping of the Atomic Bomb in August 1945.  I want to try and take you to that time and make the reader understand why President Harry S Truman dropped the bomb.

Long before Truman was elected Vice President in 1944, President Franklin Roosevelt and the nation’s top scientists and military were working on this secret new weapon of war under the code name; "Manhattan Project."  When the Senator from Prendergast was elected Vice President that November and then took office in January 1945, he had no idea of the progress of Manhattan.  After the war started, his friend from the St. Louis Post Dispatch, Charlie Ross went to Senator Truman and asked for an exclusive story that was real.  Secretary of War Henry Stimson had Truman come to his office at the War Department with General George C. Marshall joining them in the meeting to find out how Harry Truman had learned about this war secret.  The Senator told him that that was privileged.  This was such a huge secret that the War Department could not even investigate him as to how he had found out about it.  When Charlie Ross asked his friend about Manhattan and if there was a story there all Senator Truman could tell him was that it was just an island in New York, and that there was no story at all. 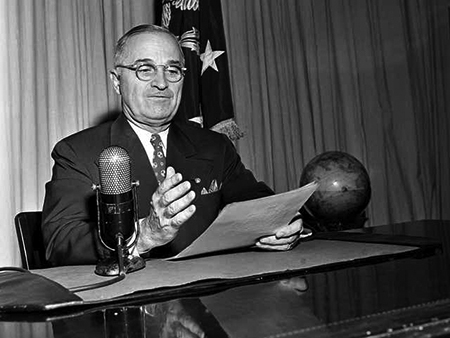 After the 1945 Inaugural, the Vice President was still not a member of the President’s inner circle.  They would have their occasional lunch together but in Truman's words, they would talk about nothing and the President’s hands could not stop shaking.  Then, eighty-two days after he became Vice President, a day incidentally where he was presiding over the United States Senate where there was bickering back and forth the Vice President was writing a letter to his mother declaring that the day, April 12, 1945 was in fact, uneventful.  Hours later, President Franklin D. Roosevelt would be dead and Harry S Truman would become President of the United States.

The new President would not even know about the Atomic Bomb until days after he became President; to which Secretary Stimson made his case as to why he treated Truman the way that he did in the past.  The President said that he (Secretary Stimson) was just doing his job as he saw fit and that he at the time had no reason to trust him.  When given the briefing on what this new weapon could do, the President asked inquisitive questions like if the Germans had one of these with the answer being that they believed that they had tried to make one and failed.  The other concern was if the Russians had any idea of this weapon to which Stimson assured the President that they had no idea that this weapon existed.  Truman pleaded that for God’s sake let’s continue to keep them in the dark.

While in Potsdam, Germany to plan the brave new world with the Allies; Winston Churchill, later Clement Attlee and Josef Stalin the President had received news from his Secretary of War; "Manhattan, the baby is born."  President Truman was told that the first two bombs would be ready by the first week of August 1945 but that the scientists felt that the weapon should not be used and had wised that they had never invested it.  Truman responded with what the hell did they invent if for then?  It just could not be uninvested.   General Marshall declared that because the Japanese would continue to fight to the end we had to destroy their ability to make war. 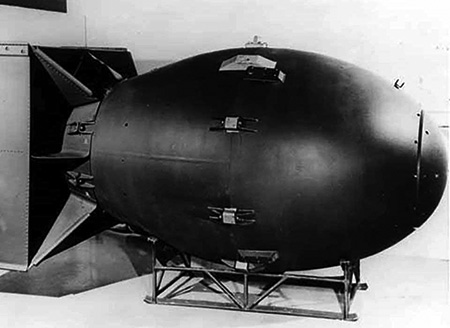 The moral dilemma was that the United States and its allies continue to fight in a mainland battle of Japan risking the lives of over one million casualties on both sides, or use this new weapon where only one hundred thousand are killed.

That led Truman to think about his having the power to end the war, long ago and then going to the American people and tell them that and that he could have used it to spare the lives of their loved ones and he chose not to do it.  He thought how could he look the American in the face after that.  My grandfather, Ben Wyles was scheduled to go and fight in that mainland battle in Saipan, but his attempt to go AWOL in Chicago and getting caught may have saved his life.  Grandpa ended up getting reprimanded at Pearl Harbor and meet up with his Army buddies in Saipan at a later time.  They were all wiped out and while Grandpa was on his way over to Japan; in addition to the boat playing Sentimental Journey which he never listed to for the rest of his life, until his death in August 2003 because he felt that there was nothing sentimental about war, there was also word that President Truman had dropped the Atomic Bomb.  Instead of tearing Japan down for a year my grandfather helped rebuild it.  For the next fifty-eight years, Grandpa would tell his children and grandchildren that Harry Truman personally saved his life by dropping that bomb.

That is the reasoning of 1945 that people don’t put themselves in, thinking only of the logic of 2021.  With the Internet, there are so many things at our disposal where you can put yourself in Harry Truman and the American people’s position in the summer of 1945.  There are audio files that you can listen to in full and uncut with no “expert” opinion from the future.  You can listen to these audio files and come up with your own conclusion as to whether the decision was right or wrong.

You can do that really with any event in history over the past 100 years where there is actual audio available.  I have done this with this very event that I just written about.  I have also done it with the Kent State University Shootings of May 1970, Watergate, the Clinton Impeachment, September 11, 2001, the Trump Impeachments, and most recently; the January 6, 2021 US Capitol Insurrection.

All you have to do is clear your mind of your personal opinions and be objective with these events.  You may still have the same opinion after this virtual trip through time, but you may also change your mind a little bit too.  One thing is for sure, it will make you visualize it in your mind and you will play it out for yourself.  If anything, you will have a better understanding of the reason of that time and not just the logic of your time that you live in today.