The protest which led to the May 4, 1970, shootings on the Kent State University Campus was over American involvement in the War in Vietnam. Most of us think of Vietnam as being a fight against Communist Expansionism which began when Kennedy sent Special Forces troops to South Vietnam in 1961. In fact, our direct involvement in Vietnam began even before the Korean Conflict as the Second World War was drawing to a close.

The Portuguese began exploring and sending missionaries to South East Asia in the 1500s. By the end of the 1700s, the Portuguese had been displaced by French traders and missionaries who would establish an important trade in silk and tropical products. The Colony of French Indochina was established in 1887.

After Paris fell to the Nazis in WWII, administration of Indochina was turned over to Axis partner Japan. The Vietnamese rubber industry was a boon to the Japanese War Effort, but the Imperial Japanese troops stationed in Vietnam were as oppressive as they were anywhere. When the War ended, France naturally wanted their colony back, but factions within Vietnam were less than enthused about returning to French rule. President Truman sent military equipment and advisors, but it soon became obvious that France, weakened by WWII, could not hold onto Indochina. The French military is defeated at Dien Bien Phu in North Vietnam by Communist Vietminh forces led by Ho Chi Min in 1954.

Fearing Communist Expansion in the region, President Eisenhower deploys the Military Assistance and Advisory Group (MAAG) to train the Army of the Republic of Vietnam (ARVN, the South Vietnamese Army). American involvement in Vietnam steadily increases under Presidents Kennedy and Johnson. The overwhelming power of the modern American Forces sees success in the field, but the jungle terrain and the decentralized nature of the enemy make final victory elusive. 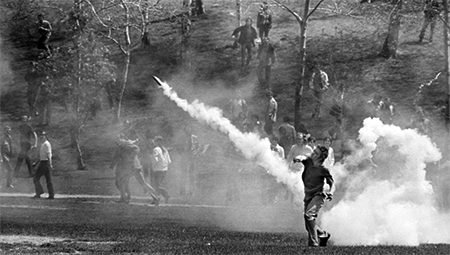 With the War apparently on an unending path, former Vice President Richard Nixon runs for the Presidency in 1968 on a platform of honorably ending the War. His policy of Vietnamization was based on US Forces buying time to allow the ARVN forces to be trained and given modern arms so that they could continue the fight. The caused a marked decrease in the morale of US Troops which was reflected by the War Protest Movement back home. Nonetheless, Nixon, with the unlikely support of the People's Republic of China and the USSR, was making progress towards bringing the troops home, as he reported in his April 20, 1970, address to the nation.

Ten days later, the President announces that there would be a slowing of the withdrawal of American Troops because of increasing North Vietnamese activity in neutral Cambodia. To combat those forces, American Troops would begin violating Cambodian neutrality.

A Hotbed of Protest

A University opened in Kent, Ohio, in September 1910. The school grew to include baccalaureate and graduate level programs in the arts and sciences. Kent State University became one of the leading research universities in the country, but it also became known for its student activism. 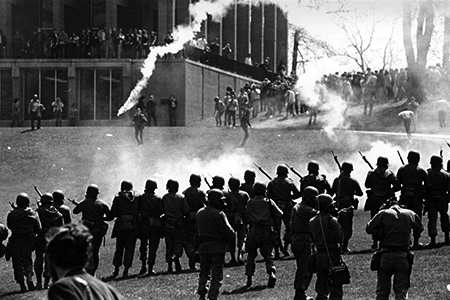 Most of the troops dying in Vietnam were university-aged young men. Although those enrolled in schools were eligible for student deferrals from the draft, it was recognized that the deferrals were slim protection and that those without deferrals were serving and dying in an unjust War. At the 1966 Kent State Homecoming Parade, several students marched wearing surplus military uniforms and gas masks to protest the War. In the fall of 1968, the campus chapter of Students for a Democratic Society (SDS) and a Black Student's Civil Rights group staged a sit-in to protest police and military recruiters operating on campus.

Anatomy of a Massacre

The President made his announcement on Thursday, April 30, 1970. The following day, about 500 students gathered at the University Commons to demonstrate against the President's pronouncement, but the crowd peacefully dispersed by 1 pm to attend afternoon classes. Plans were made for another rally on Monday to "bring the War home". A copy of the constitution was buried by a group of history students and a sign appeared, nailed to a tree, asking "Why is the ROTC building still standing?"

There is always the potential for mischief on a Friday night in a University town. Around midnight, a group of revelers left their bar and began tossing empty bottles at police cars. Soon, storefront windows were being shattered, including a local bank which set off a loud alarm. Many other local bars began closing in response, but this just meant more people on the street. Kent Mayor LeRoy Satrom declared a state of emergency and Ohio Governor Jim Rhodes ordered all the bars in town closed (putting even more angry people on the street. The crowd was finally driven back to the Campus with tear gas.

On Saturday morning rumors began flying that the town of Kent was threatened by radical revolutionary forces. Merchants reported that their stores would be burned if they did not display anti-war slogans. Supposedly, plans were afoot to burn the ROTC Building and poison the town's water supply with LSD. The ROTC building was, in fact, torched amid a growing protest rally on the campus. Firefighters and police were held back from the fire by rocks thrown by the crowd. The Ohio National Guard was called in but did not arrive until 10 pm.

There were several reports that a majority of the Saturday night participants were not Kent State students. Numerous arrests were made, mostly for curfew violations, and at least one student was treated for a bayonet injury.

On Sunday, Governor Rhodes held a press conference at the Kent Fire House where he berated the protesters for their lack of patriotism and hinted that he might be forced to declare a state of martial law. A few students made their way downtown to assist with clean up after the riot, but the local merchants gave a mixed greeting. Around 8 pm, another rally began to form on the Commons which the Guardsmen dispersed using tear gas. The rally reformed in town at the intersection of Main and Lincoln in the form of a sit-in which the students hoped would lead to a meeting with the Mayor and University President Robert White. The Ohio National Guard enforced the curfew, forcing students back to their dorms. There were more reports of bayonetting.

Campus officials tried to distribute pamphlets that the Monday, May 4, Noon Rally had been canceled, but there were already 2,000 people gathered on the Commons before noon. Just before noon, a campus patrolman riding in a National Guard jeep approached the crowd and read an order to disperse. The crowd answered by tossing rocks at the jeep.

At noon, the National Guardsmen again warned the crowd to disperse and was ignored, again. The Guardsmen tried to use tear gas, but conditions were windy enough that the tear gas was ineffective. Some protesters tossed the tear gas canisters back at the Guardsmen who were wearing gas masks. Finally, a group of 77 Guardsmen fixed bayonets to their M1 Garand rifles and began advancing on the crowd.

The M1 Garand rifle was the general issued firearm for US Soldiers and Marines in WWII. Although a very heavy rifle by modern standards, it is capable of highly accurate, semi-automatic fire, meaning that every time the trigger is pulled another round is automatically chambered and ready to fire. The M1 fires the .30-06 round which was developed for the military before WWI and is still in common use today as a hunting cartridge to dispatch elk, moose, grizzly bears, lions, and bull elephant.

The crowd on the Commons moved over Blanket Hill toward the parking lot in front of Prentice Hall. The Guardsmen followed but rather than veering left into the parking lot, marched straight onto the Practice Athletic Field. Their intent may have been to flank the movement of the protesters, but they did not realize that the Practice Field was enclosed by a chain link fence.

For about ten minutes, the Guardsmen remained on the Practice Field, apparently unsure how to proceed without retracing their steps. They could see the crowd gathering in front of them and to the left. There are reports of Guardsmen assuming a kneeling firing position and aiming their rifles at the crowd. Finally, the Guardsmen began marching back over Blanket Hill toward the commons, slowly followed by a large number of protesters.

The Guardsmen struggle to keep eyes on the crowd which was now behind them. At 12:24, a sergeant began firing his sidearm, a Colt M1911A1 .45 caliber pistol, into the crowd. Sensing this as a signal, several of the Guardsmen assumed firing positions and discharged their M1s into the crowd. Post action reports verify that 67 rounds of ammunition were expended.

Nine students were injured, one of whom was left paralyzed for life, and four were killed. The nearest of the injured students was 71 feet from the Guardsmen, the nearest fatality was 265 feet away. Of those killed, Allison Krause and Jeffrey Miller were participants in the Protest. Sandra Scheuer and William Knox Schroeder were shot as they were walking from one class to another.

The images of the Guardsmen with their rifles and gas masks and the dead lying on the campus quickly became indelibly connected to the War Protest movement. Student strikes which were planned in protest of the Cambodian Expansion were further inflamed by the Kent State Massacre. Across the country, ROTC Buildings were burned or bombed on 30 campuses. National Guard Units were mobilized in reaction to at least 21 campus protests in 16 states. 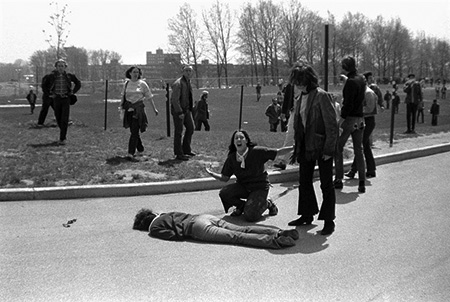 President Nixon was evacuated to Camp David for two days to ensure his safety and the 82nd Airborne Division was mobilized to keep order in Washington DC. The President was unsuccessful in his efforts to reach out to the student protesters (including a personal visit to a group of 30 holding a vigil on the steps of the Lincoln Memorial at 4:15 am on May 9, 1970). Eventually, the President became convinced that the protesters were acting as agents of a foreign power set on disrupting the government.

Nixon won reelection by a landslide in 1972, thanks in part to Henry Kissinger's declaration just before election day that "Peace is at Hand". The Paris Peace Accords, "Ending the War and Restoring Peace in Vietnam" were finally signed on January 27, 1973, earning Kissinger the Noble Peace Prize.

What lessons can we take away from Kent State? That is for each listener to decide, however, it should be pointed out that even with the miracles of the Internet, the 24-hour News-cycle, and social media, there are divisions in the Nation which run as deep as they did during the Sixties, perhaps even going back to the Civil War period.

Protest, peaceful and otherwise, is the bedrock of the American Experience going all the way back to the Founding Fathers holding a Tea Party in Boston Harbor. The First Amendment to the Constitution's provisions for Free Speech ensure the right to Protest and part of the justification for the Second Amendment is the possibility that the American Government has the possibility to turn tyrannical.

The protests of the Occupy Movement, Black Lives Matter, Antifa, the Tea Party Movement, or Patriot Prayer are of value whether we agree with their positions or not. However, these protests and counter-protests are policed by forces which are authorized to use deadly force to protect the public interest. Whether deadly force takes the life of a protester, a police officer, or a bystander, there are no martyrs, there are only victims whose lives are cut off too soon.