The Telephone Hour (Music From America)

The Best of Classical and Broadway Music, presented by Ma Bell.

Choose your CD format
or order disks individually: Add to Cart Add to wishlist
Play a sample episode from September 11, 1944:

Today with the waning importance of Land-line phone service in the face of the multitude of cellular phone carriers and internet telephony, it may be hard to appreciate the power that was once wielded by Ma Bell.

American Telephone and Telegraph Company was a direct descendant of the American Bell Telephone Company which was formed to take advantage to the monopoly created by the telephone patents of Alexander Graham Bell. Earnings fell for a short time when the patents ran out in 1894, but the company was soon to bounce back with the motto "One Policy, One System, Universal Service". Bolstered by the Communications act of 1930 Ma Bell owned practically the entire communications system except for mail and broadcast. People didn't even own their own phones; equipment manufactured by Western Electric (an AT&T subsidiary) was leased as part of the phone bill. IF you wanted a different phone you had to buy it at your own cost, give it to Ma Bell, and they would lease it back to you, after charging you a rewiring fee. 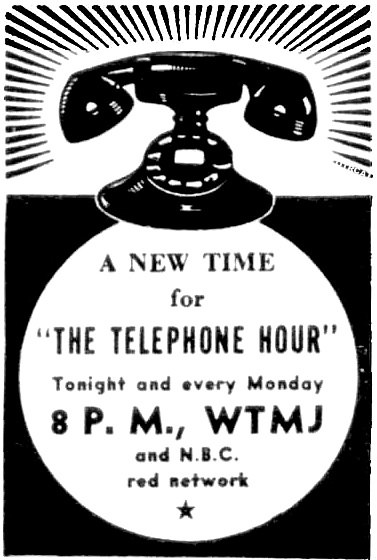 The Ma Bell Monopoly was finally broken up by Federal Lawsuit in 1984. AT&T remained the dominant Long Distance Carrier for a time, but was soon displaced by competition from MCI and Sprint.

One cultural legacy from the Ma Bell Company was the Bell Telephone Hour Encores radio show. The series showcased the best of Classical and Broadway Music including Marian Anderson, and reached an estimated nine million listeners each week. The program aired on NBC from 1940 through 1958, then continued on TV from 1959 through 1968. The Bell Telephone Hour Encores Orchestra was conducted by Donald Voorhees for 26 years.