The Symphonies of the World

A collection of concerts by the CBS, NBC, and ABC network orchestras provided to AFRS.

Choose your CD format
or order disks individually: Add to Cart Add to wishlist
Play a sample episode from October 20, 1946:

Symphony is a beautiful word which comes from the Greek meaning "sound together" has come to describe both a musical composition and the instrumental ensemble which plays it. The ensemble meaning of the word is more properly a shortening of the term symphony orchestra. In the Middle Ages, symphony referred to instruments which could make more than one form of sound, originally two-headed drums and eventually including hurdy-gurdy type instruments. Early English dulcimers and German spinets and harpsichords were referred to as symphonies. 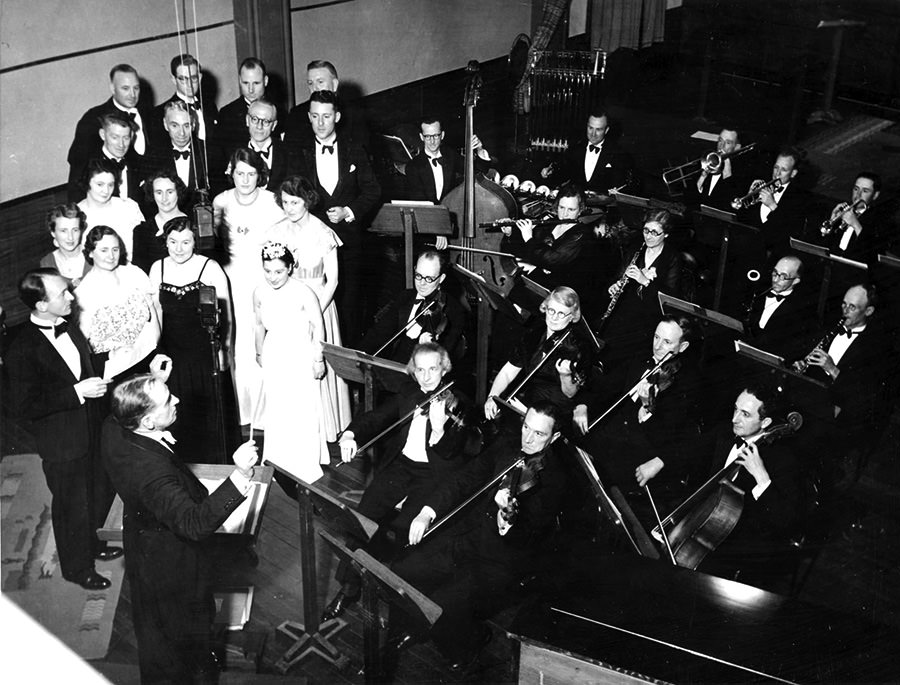 The compositional form of symphony came into use during the 17th century when symphonies were the instrumental portions of larger works such as operas, sonatas, and concertos. The orchestral symphony grew from the Italian Overture from opera, consisting of a three-movement format such as: fast, slow, fast and dance-like. In the earliest symphonic compositions, the composer rarely gave precise designations of which instruments would take a particular part. Early symphony orchestras were composed of strings, and eventually, woodwinds, brass, and percussion instrumentation became formalized as part of the symphonic experience.

During the 1700's, symphonies and symphonic composers were often under the patronage of wealthy families and "the symphony was cultivated with extraordinary intensity". This was the period which gave us the works of Haydn, Mozart, and Bach. The three-movement style evolved into the four-movement, but innovation within the formalized styles remained a hallmark of symphonists. The was best demonstrated in the early nineteenth century by Beethoven who brought unprecedented emotion and style to his symphonies.

A series called Symphonies of the World from someone like the Armed Forces Radio Service would be expected to be a collection of symphonic recordings from symphony orchestras in different cities. In fact, the series is a collection of concerts by the CBS, NBC, and ABC network orchestras. The different networks provided the recordings to AFRS free of charge, just as they had with other content, but as the concerts were mostly sustained programming on the commercial networks, they were simpler to "decommercialize" than sponsored programming. The AFRS announcer was Jack Little.