The youngest singer to appear at the Copa Cabana nightclub and worked with Garroway on TV, Jill Corey became a regular on Johhny Carson's CBS comedy/variety show from California in 1956. She had a number of hit recordings as well as a starring in a few syndicated radio programs. Not every show business success story is a splashy one. It has a lot to do with how you define success. For some, success is defined by a string of blockbuster hits and all the trappings of wealth. For others, success means having a shelf full of awards reflecting the admiration of their peers. Perhaps the happiest are those who can define success as being a small-town girl who had a brush with the bright lights of Hollywood and Broadway, the chance to raise a happy family, and the opportunity to step back into the limelight later in life. For your consideration, we present the story of Jill Corey.

The youngest of five children born in the tiny coal mining town of Avonmore, Pennsylvania, about 40 miles east of Pittsburgh, Norma Jean Speranza came into the world on September 30, 1935. Unlike girls today who have dozens if not hundreds of showbiz idols to imitate, about the only singer Norma Jean knew was Carmen Miranda which she did imitations at family gatherings and grade-school talent shows. Perhaps not that good, of all the contests and talent shows little Norma entered, she never one.If she never won the prize, she had a lot of fun. By the age of 13 she began to discover her own style. First prize in the Lion's Club talent show was a chance to perform on the local radio station. The station manager must have been impressed, because Norma Jean was invited to sing on her own program- she began earning $5 a night singing with the local orchestra led by Johnny Murphy. One of her admirers encouraged her to make a tape recording that could be sent to the "Show Biz Big Shots". She went to the home of the man who owned the only tape recorder in town, and with trains passing in the background and no other accompaniment, made her tape. 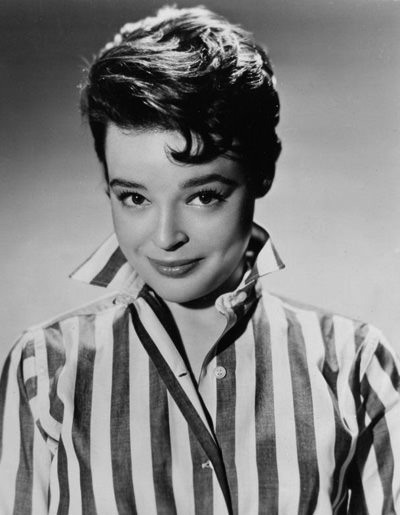 One of her radio admirers convinced Norma that she should make a tape recording of herself singing and send it to… someone! One problem with the plan was that there was only one person in town who owned a tape recording. Norma went to his house by the tracks and sang a Tony Bennett number into the machine, with no accompaniment and with train whistles in the background. The obvious person to send the recording to was Mitch Miller, the A&R man at Columbia Records.

Somehow Mitch Miller, head of Artist's and Repertory at Columbia Records, heard the tape. At this time Miller must have been receiving more demo-tapes each week than he could possibly listen to, but some how he found time to listen to a 17 year old girl with trains passing in the background. What is no surprise to her later fans, Miller liked what he heard.  Miller was one of the leading star-makers in the recording industry and heard from hundreds of hopeful singers every week. There was no way that he should have been impressed with an amateur recording from a girl in the middle of nowhere with train whistles in the background, except that he was impressed. Enough so that he called Norma in Avonmore and made arrangements for her to come to New York and sing for him in better conditions.

The phone in little Avondale rang from New York, and the next morning Norma Jean was on the 8:00am plane from Pittsburgh to New York. After hearing her in a studio setting, Miller set up auditions with Arthur Godfrey and Dave Garroway, then called the Life Magazine photographers. The Life Photographers had her reenact signing her Contract with Columbia, and that evening she was back in her bed in Avondale, probably wondering if the whole thing had been a dream.

After hearing her sing in the studio (without trains), Miller signed Norma on the spot. Then he called LIFE magazine who made her reenact signing the contract so they could get the event on film. After this busy day, she flew back home. Dave Soon after she got there she received phone calls from Arthur Godfrey and Jack Garroway, hosts of two of the biggest talk-show/variety programs on TV. It was Garroway who chose the name Jill Corey out of the phone-book for the new young star. Within six weeks, the November 9, 1953, edition of LIFE came out with Jill on the cover and suddenly she was everywhere.  She became the youngest singer to appear at the Copa Cabana nightclub and worked with Garroway on TV. She became a regular on Johhny Carson's CBS comedy/variety show from California in 1956. She had a number of hit recordings as well as a starring in a few syndicated radio programs.

In addition to Garroway's show, she was Ed Sullivan's program and appearing as a regular on Johnny Carson's first prime-time show. She became one of the youngest ever to headline at the Copacabana and was a featured singer on TV's Your Hit Parade. In 1958, she appeared in Columbia Pictures' Senior Prom. The tabloids connected her with everyone they could think of, from Frank Sinatra to Brazilian diplomats, and then she fell in love with a ball player.

Don Hoak grew up in Northern Pennsylvania and got into the big leagues after a hitch in the Marine Corps, playing for the Brooklyn Dodgers. He was in Jackie Robinson's spot on third during the deciding game when the Dodgers won their only World Series in Brooklyn. He spent time with the Cubs and the Cincinnati Redlegs before joining the Pittsburgh Pirates in 1959. He gave Jill Corey a wedding ring in 1961 the year after the Pirates won the World Series, and she largely gave up show business to raise a family.

Jill and Don had a daughter, Clare, and Don hung up his spikes after the 1964 season. From 1965 to 1967 he was in the broadcast booth for the Pirates and worked as a manager in their farm system during '68-'69. He was hoping to be tapped for the Pirate's manager spot, but on the day it was announced that Danny Murtaugh was going to be rehired, Don suffered a heart attack while chasing a car that was stolen from Jill's brother. Jill claimed for four decades that Hoak died of a broken heart after being passed over for the Pirates manager job.

Suddenly on her own with a young girl to raise, Jill moved back to New York and worked on and off Broadway and on the nightclub circuit. This small collection of shows, Jill Corey Sings, was a syndicated plug for the National Guard.