Baseball legend, Jackie Robinson takes to the airwaves to interview celebrities of the day and answer questions from listeners.

Choose your CD format
or order disks individually: Add to Cart Add to wishlist
Play a sample episode from January 12, 1960: 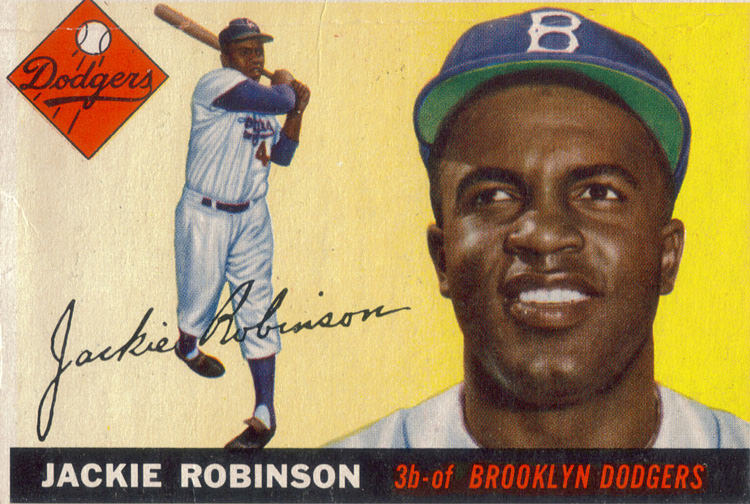 Walt Whitman supposedly said, "I see great things in baseball. It's our game, the American game. It will repair our losses and be a blessing to us." 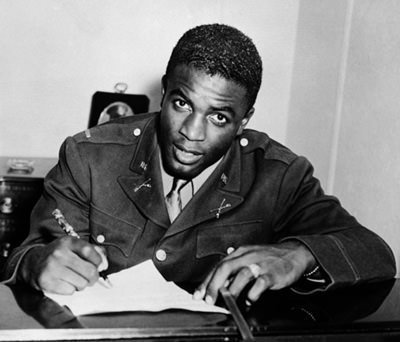 Of all American losses, few are as tragic as racial relations. Number 42, Jackie Robinson of the Brooklyn Dodgers, is credited with breaking Major League Baseball's color line, a move which ultimately benefitted not only the game, but America itself.

Although he was raised in relative poverty in Pasadena, CA, Robinson developed a reputation as a good citizen, a studious young man, and shared a talent for athletics with his older brother Mack (a silver medalist at the 1936 Summer Olympics).

Jackie was the first athlete to letter in four sports at UCLA in 1939, and was one of four black players on the Bruin's football team, at the time, one of the most integrated college squads in the country. His plans to pursue a professional football career were cut short by the War. After being drafted into the Army, he applied to Officer Candidate School, but the appointment to the supposedly race neutral OCS was held up for political reasons. Several black candidates were finally admitted after protests from heavy-weight champion Joe Louis.

However, Robinson's military career was derailed when the Second Lieutenant was court martialed for refusing to move to the back of a bus while stationed at Ft. Hood, TX. Although he was eventually acquitted, his unit, the storied 761st "Black Panthers" Tank Battalion shipped out to Europe while Jackie was awaiting legal proceedings. Thus, Jackie never saw combat.

After his discharge, Jackie joined the Kansas City Monarchs of the Negro American League. Although he was an above average player in the Negro Leagues, Robinson found the disorganized play frustrating after the regimentation of college ball. There were better players in the Negro Leagues, but Robinson caught the eye of Brooklyn Dodger's president and general manager, Branch Rickey. Rickey, with the quiet support of new Baseball commissioner Happy Chandler (who later wrote that "he could not in good conscience tell blacks they could not play with whites when they had fought alongside them in World War II") set out to find just the right player to be the first to cross the color line. Although Robinson was not the best player in the Negro Leagues, Rickey felt he had the moral strength for the role. He challenged Jackie to endure racial epithets and not rise to the bait. Robinson challenged "Are you looking for a Negro who is afraid to fight back?" Rickey replied that he needed a Negro player "with guts enough not to fight back".

Although he had a slow start to the 1947 season, after facing derision from fans, players and the press, Jackie's athleticism carried him to win the first ever Rookie of the Year award (the award has since been named the "Jackie Robinson Rookie of the Year Award" to honor Robinson).

Robinson's career came at the beginning of the "post-long ball era" when the game began to lose the dominance of power hitters in favor of a more tactical style of play which emphasized foot speed and aggressive base running. Jackie had 197 stolen bases during his career and stole home 19 times.

After retiring from baseball, Jackie continued to fight for civil rights while enduring a personal battle against diabetes. He became an analyst for ABC's Major League Baseball Game of the Week, the first black person to do so.

Before sitting in front of the camera's, however, Jackie went before the mike on the syndicated Jackie Robinson Radio Shots. The program was a short format spot featuring a short introduction, a commercial pause, and Jackie interviewing a well known personality. Interviews range from manager Branch Rickey, baseball greats Satchel Paige and Al Schacht to entertainers Johnny Mathis, Ed Sullivan and Greta Anderson. General of the Army, Omar Bradley, even graces the guest list.

Some editions of Radio Shots feature "mail bag" replies and Jackie also provides a few "editorials" where he comments on subjects including a National Lottery, boxing, even the excitement of stealing home. The common thread throughout Radio Shots is an appreciation of sports and the importance, not only the athletes, but the fans who appreciate and support their performance.