Although he never admitted to being more than 39-years-old, Jack Benny was too old to be drafted during WWII, but he still did his part to win the War.

Choose your CD format
or order disks individually: Add to Cart Add to wishlist
Play a sample episode from August 25, 1944: 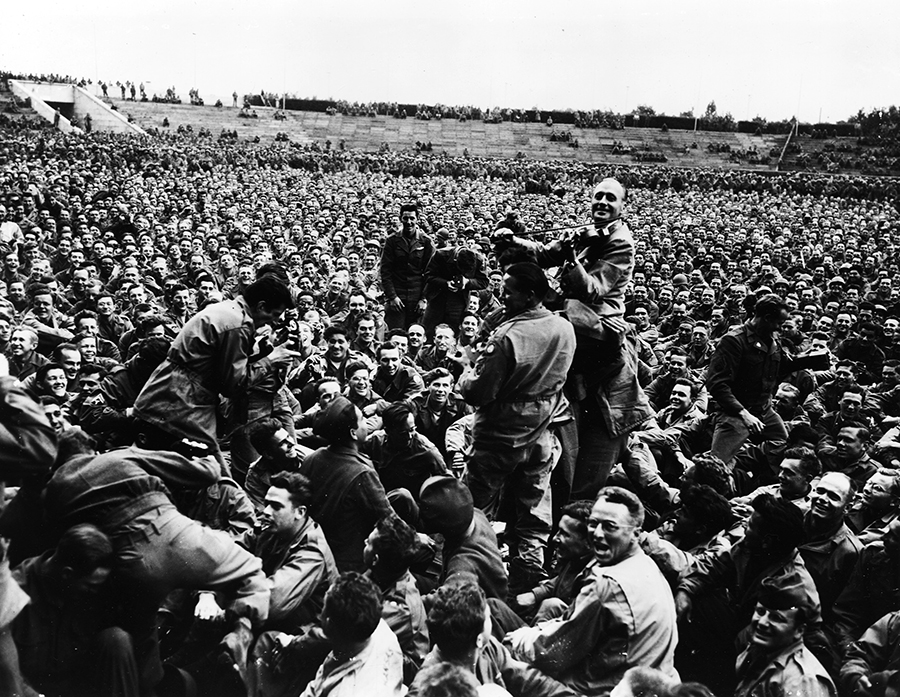 The last of America's isolationist attitude evaporated when the bombs fell on Pearl Harbor. Even though we were, and are, a nation of individuals, everyone pulled together to defeat the enemies on both sides of the globe. Although they were never going to be on the front lines, the folks in Hollywood did their best to do their part as well, and Jack Benny and his gang were no exception.

Jack was establishing his vaudeville career when America joined the First World War, and he joined the Navy. Assigned to the Great Lakes Naval Training Center, he was called upon to entertain his shipmates with his violin and discovered that he was better at getting laughs than he was at gaining musical appreciation. After mustering out, he became more of a funnyman in his act.

By the end of the Thirties, The Jack Benny Program had become the high point of the Sunday night lineup, and, of course, December 7, 1941, was a Sunday. Although the cast and the studio audience were rattled with the news coming from Hawaii, the program went off without a hitch, although in some markets there was a break ten and a half minutes into the show for a public service announcement. By that time of the evening on the West coast, the most important message was for everyone to remain calm. 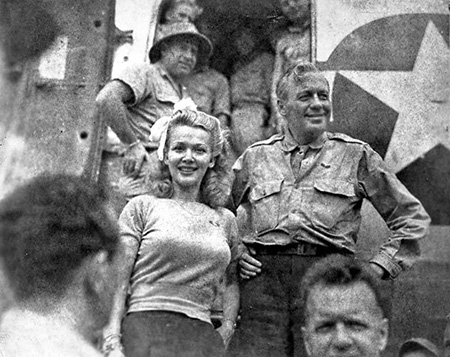 Jack and the gang were old hands at doing remote broadcasts away from their Hollywood studio, often performing back East when Jack traveled on business. They did a program from the Naval Training Center in San Diego in the summer of 1941, but after War was declared it seemed like there was no base too remote for Jack to bring the show. The first camp show after Pearl Harbor was from March Field on January 11, 1942.

An early casualty of the War was Jack's sponsor. The gang had been singing "Jay, Eee, El-el, Ohhh!" since the fall of 1934. Unfortunately, the tasty and economical dessert required a lot of sugar to manufacture and more of the sweet stuff was mixed in at home, and sugar was one of the first commodities to be rationed during the War. On May 10, 1942, broadcasting from the recently reopened Air Corp training facility at Mather Field in Sacramento, Jack does a sketch where he visits the office of the president of General Foods and is informed that The Jell-O Program is coming to an end. Three weeks later, the gang does a "Jell-O retrospective", but in the fall they are all back on The Jack Benny Program for Grape-Nuts and Grape-Nuts Flakes. The breakfast cereal is a General Foods product as well, but it never seems to be as much fun as the colorful dessert.

The spirit of sacrifice is further demonstrated when Jack gives up his beloved Maxwell automobile in a scrap metal drive in October 1942. The car, played by coughing and wheezing sounds from Mel Blanc, had become more of a character than a prop, and it will be back on the program. Skinflint Jack is unhappy with the small amount of money it brings (although he is happy to take it in War Bond Stamps). However, he dreams that the metal in the car is used to build a bomber and he is flying it on a mission to Tokyo. A few days after the broadcast, Jack and Mary appeared on The March of Time to make a pitch for the scrap drive.

An even bigger sacrifice was made in personnel. At the age of 38 and with his first daughter recently born, Phil Harris (along with most of the band) joined the Merchant Marine in December 1942. Tenor Dennis Day joined the Navy in the spring of 1944, serving as a Lieutenant. The services used both performer's musical talents rather than putting them into front-line combat units (Harris actually missed only a few episodes of the program). When they mustered out at the end of the War, they went back to work for Benny and soon got shows of their own.

While the Jack Benny Program was on its summer break in 1943, Jack toured Europe and Africa on a USO Tour. Back home, the Armed Forces Radio Service was headquartered in Hollywood, and like so many of his fellow performers, Jack was more than happy to appear when asked. He M.C.'d several editions of Command Performance and Mail Call as well as appearing with his whole gang. The famous Jack Benny/Fred Allen Feud "officially" ended several years earlier but it was played out to great effect on Command Performance.

After VE Day, Jack was in Europe again on a USO tour. The Lucky Strike Program was still on summer break on VJ Day, and with the coming of peace, Jack Benny and the gang quietly went back to entertaining America.