For the peoples living in the victorious nations it seemed as though it should be a time of celebration, Nazi Germany had declared their unconditional surrender to the forces of the Allied Powers.

Choose your CD format
or order disks individually: Add to Cart Add to wishlist
Play a sample episode from May 08, 1945:

"On a Note of Triumph: VE Day"

Church bells rang out on May 8, 1945, with a message for the whole world, a message of Peace. For the peoples living in the victorious nations it seemed as though it should be a time of celebration, Nazi Germany had declared their unconditional surrender to the forces of the Allied Powers. The surrender came just days after the focus of evil, Adolf Hitler, had committed suicide in his bunker hiding place as Soviet troops were bearing down on Berlin. 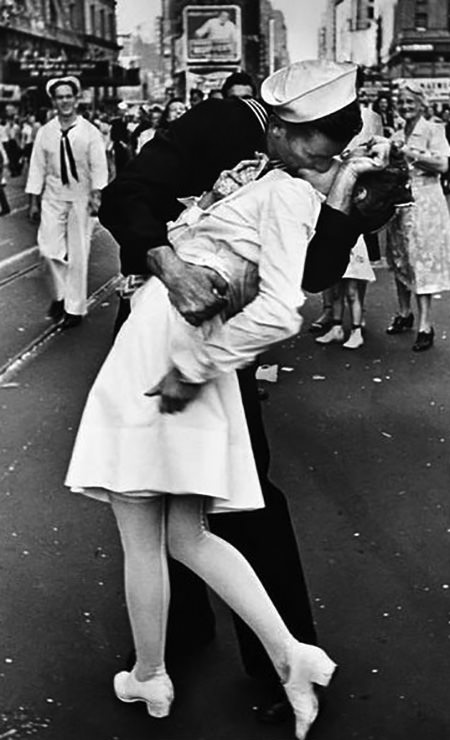 As we move west, we see dancing in the streets of towns and villages which had been liberated by the advancing American and British forces. Not so very long ago, the peoples of Great Britain looked East across the Channel expecting to see the advance of an invasion force coming toward their "island fortress". On this day, Princesses Elizabeth and Margaret wandered incognito through the crowds in Trafalgar Square who had come to see the King and Queen standing beside Winston Churchill in celebration.

Across the Atlantic, the celebratory mood was somewhat tempered. Flags would continue to fly at half-staff in mourning for Franklin Delano Roosevelt, the President who had led the nation out of the Great Depression and through most of the War but who died in Georgia on April 12. Mothers wept with joy thinking that their sons would be returning safely from Europe, then rushed to support other mothers whose sons were still deep in the fighting in the Pacific.

Victory in Europe had been considered somehow "more important" than defeating the Empire of Japan even before the attack on Pearl Harbor. This attitude made Norman Corwin's On a Note of Triumph all the more poignant. The knowledge that Japan was still to be defeated cast a somber note on Fibber McGee and Molly as announcer Harlow Wilcox opened the VE Day broadcast with a reminder that there was still a lot of work to do. Presented with humor, Fibber and Molly encapsulated the attitudes on the Home Front from the beginning of the War, and their relief at VE Day can be heard on the performance that night. 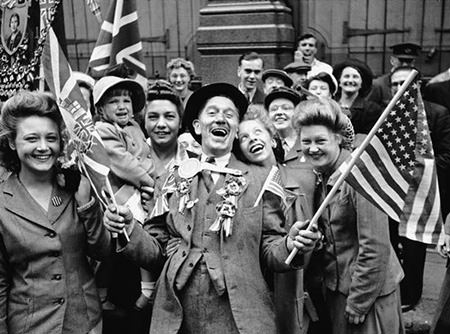 The peace promised by VE Day would ultimately prove illusory. Although victorious, the British Empire had been effectively wrecked by the War. Continental Europe faced rebuilding after years of physical and financial ruin. Modern historians point out that the brunt of the European War had indeed been carried by the Soviet Union, and in the immediate aftermath of VE Day the defeated German Armies were in flight to escape capture by the Soviets. There were more than a few American voices which advocated remaining in Europe because a faceoff with our uneasy Soviet allies was inevitable.

On this day, however, it is more important to listen to the church bells, bells which had been expected to ring warnings of invasion so recently, now ringing in victory.