She was ready for Hollywood after her divorce when she was a meer 15 years old, Carole Landis' breakout role was Loana in One Million BC

Choose your CD format
or order disks individually: Add to Cart Add to wishlist
Play a sample episode from June 11, 1942: 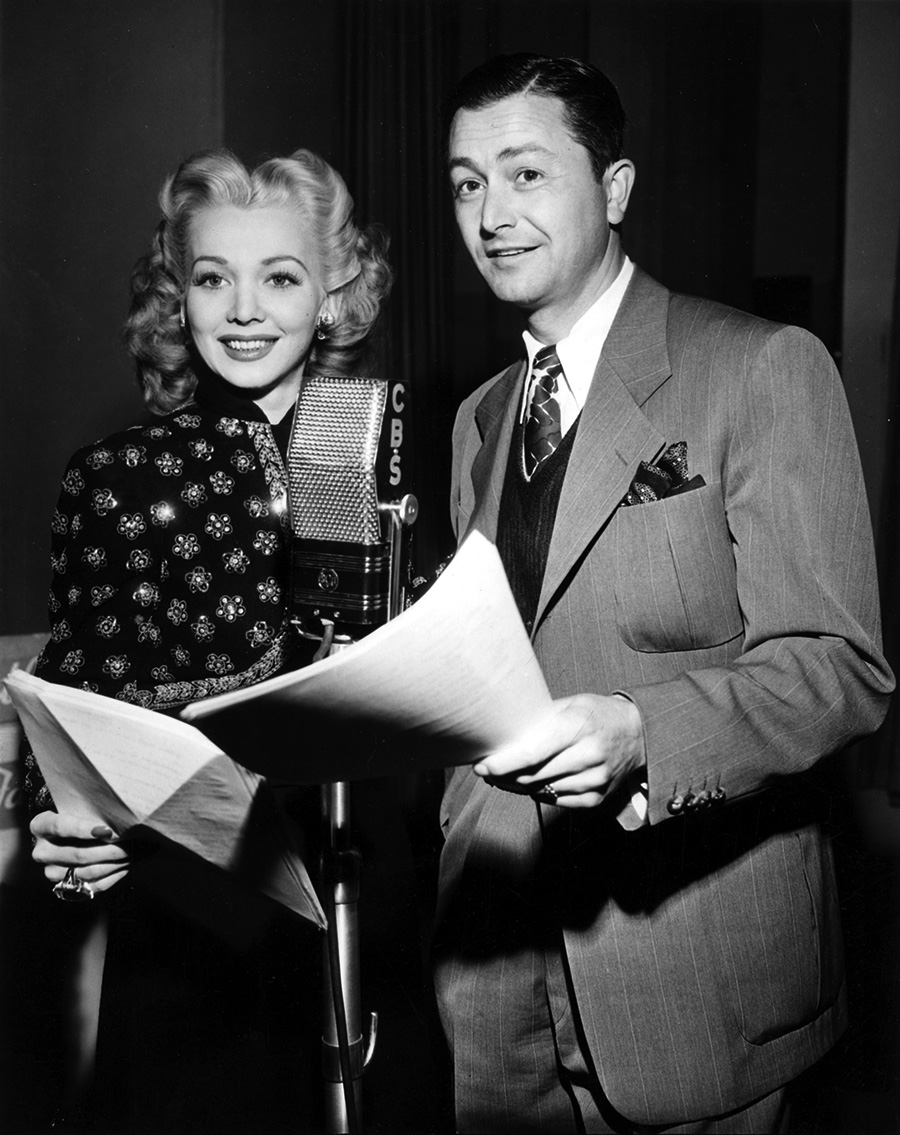 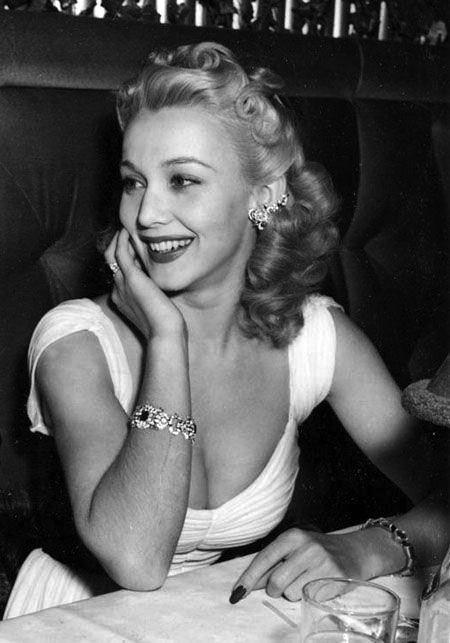 It is often the brightest flame that burns out the fastest.

Carole Landis never quite made it to the A-List Super Star level. Perhaps she spent too much of her energies to achieve the level of adoration she did gain, or perhaps her personal demons finally catching up with her that led her to take her own life at the age of 29. To be sure, Landis's life left her with plenty of demons to deal with.

Born Frances Lillian Mary Ridste in Fairchild, Wisconsin, on New Year's Day, 1919, she was the youngest of five children born to Clara, a Polish farmer's daughter, and Alfred, a railroad mechanic. One brother, Jerome, had been killed in an accident with boiling water in 1917. This put an incredible strain on Clara and Alfred's marriage, and he walked out soon after his youngest daughter was born.

Clara took up with a local farmer, Charles Fenner (who was rumored to have been Frances's biological father), but Fenner also walked out on them. In 1923, Clara took her surviving children to San Bernardino, California, where she worked a series of menial jobs to support them, often leaving the kids to take care of themselves. Francis and older sister Dorothy were very close, especially after brother Lewis was killed from an accidental firearms discharge.

When she was just nine, Frances attended a talent show with her mother, and impulsively ran on the stage and began singing a number. She became obsessed with showbiz and becoming a movie star. She became a very attractive teenager and a slightly troublesome one. Her mother was pleased that she able to win prizes like silk stockings and an electric heater at beauty pageants beginning at the age of twelve, her principal was less amused when she tried to organize an all-girls football team, saying it was "unladylike".

She dropped out of high school at 15 to marry a local 19-year-old "writer" named Irving Wheeler. Her mother had the marriage annulled, but she badgered her father, Alfred (whose railroad work had brought him to San Bernardino, although he had very little contact with the family), into granting permission and she remarried Wheeler. After three weeks of wedded bliss, the couple had an argument and she walked out, deciding that it was time to pursue her showbiz dreams.

She ran away to San Francisco where she adopted the stage name Carole Landis (from her favorite star, Carole Lombard, the name change was made legal in 1942). She worked as a hula dancer in a nightclub and sang occasionally with the house band. As soon as she had amassed a savings of $100, she struck out for Hollywood. Her debut was as an extra in A Star is Born (1937), and she appeared in a number of "horse operas". She met 41-year-old choreographer Busby Berkley at an audition and began an affair with him. She won a contract with Warner Bros and Berkley was expected to propose marriage when out of nowhere Irving Wheeler showed up to sue Berkley for "alienation of affections". The case was soon dropped, and the Wheelers were granted a divorce, but Berkley ended the affair and Warner Bros released her from her contract.

Carole began appearing in a number of rather racy "cheesecake" photos which showed off her long legs and 37" bust. Hal Roach gave her the lead as the scantily-clad cave girl in One Million B.C. (1940), which was generally considered Landis's "big break". The same year, she married yacht broker Willis Hunt, but the marriage lasted only two months. She soon signed a very lucrative contract with Twentieth Century Fox and her career seemed to be on the upswing.

There is some "chicken-or-the-egg" supposition regarding Landis's appearance at Fox, specifically whether she landed the contract because she was sleeping with Darryl Zanuck or whether the affair began after she was signed. Either way, she landed some plum roles early during her time with the studio, including co-starring with Betty Grable in Moon Over Miami (1941), and Dance Hall (1941) with Cesar Romero. When she ended the affair she continued to work but found herself assigned to lesser parts in B-pictures. 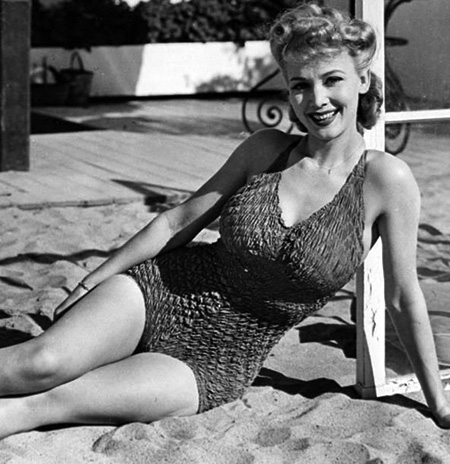 Carole Landis dedicated herself to the War effort, taking time from her career to make several War Bond tours and entertaining at camp shows. In 1942, she was with the USO to tour England and North Africa with Martha Raye, dancer Mitzi Mayfair, and Kay Francis. She recorded her experiences in a book entitled Four Jills in a Jeep, which was the inspiration for the 1944 film of the same name. After finishing the film, Jack Benny invited Carole to join his troupe on what would be an incredibly taxing USO Tour of the Pacific Theater. Jack said, "You soon forgot she was Carole Landis, the sex symbol, the Hollywood star, because she was a real human being and had a warm heart that spilled over with kindness." At some points in the tour, the troupe put on as many as five shows a day and were often housed in primitive conditions. Carole contracted malaria, which was nearly fatal. Back in the States, she volunteered as an Air Raid Warden, and even got her pilot's license and flew with the Civil Air Patrol!

By the time she was ready to resume her career, she found herself largely ostracized by Hollywood, so she made an attempt to conquer Broadway. Appearing in the aptly named The Lady Says Yes (1945), she became romantically involved with her co-star, Jaqueline Susann, but the show was unsuccessful and closed after 87 performances. She married Broadway producer Horace Schmidlapp in December 1945, and the marriage lasted for two years.

After the split from Schmidlapp, Carole began an affair with British heart-throb, Rex Harrison. Known around Hollywood as "Sexy Rexy", Harrison was married to actress Lilli Palmer. The affair was an open secret around town, and Carole was convinced that he was "the one", but Harrison refused to get a divorce (Palmer was his second of six wives). 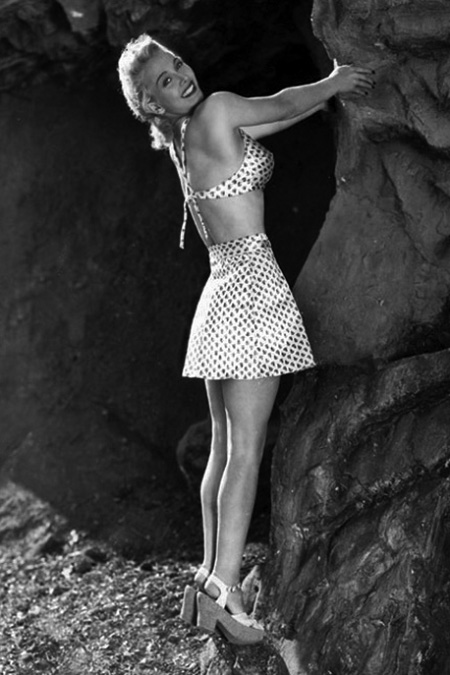 On July 4, 1948, Carole hosted a pool party for some friends (including Harrison). During the party, she seemed to be in good spirits but shooed her guests away so that she could prepare for a quiet dinner with Rex (it was the seventh dinner in a row they had shared). They enjoyed cold roast chicken, a salad, and a lemon chiffon pie that she had baked. Harrison reported that they spent a quiet evening discussing her career before he left to visit a friend who lived in the neighborhood around 9:00 PM (other sources report he left after midnight and that they argued about his refusal to divorce Lilli Palmer).

Harrison tried to call Carole several times the next morning to no avail. Around noon, he returned to the house and is let in by the maid, and together they discover Carole Landis, dead on the bathroom floor, having taken 40 Seconal tablets. Rather than calling the authorities, Harrison drove home and called studio head Darryl Zanuck before returning to Landis's residence some hours later. His contract with Fox was quietly dropped over the affair.

The Landis family website has speculated that there is much more to Harrison's involvement in Carole's suicide than he let on, hinting that there may have actually been foul play on Harrison's part. Rex Harrison died of pancreatic cancer in 1990 at the age of 82. Carole Landis was just 29 when she died.

A Star on the Hollywood Walk of Fame was awarded posthumously to Carole Landis in 1960 at 1765 Vine Street. The location is shared by Stars honoring Marlon Brando, Dom DeLuise, Buddy Ebsen, Hoot Gibson, Texas Guinan, and John Huston. 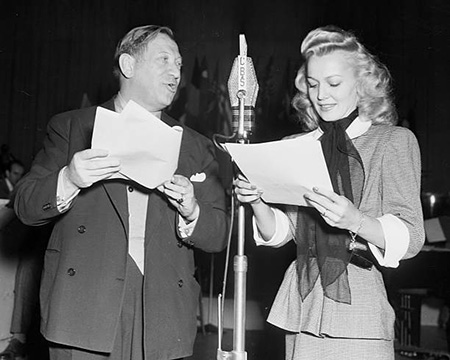