One of the greatest actors in American cinema, Marlon Brando was known for method acting and gripping realism that he brought to his performances. 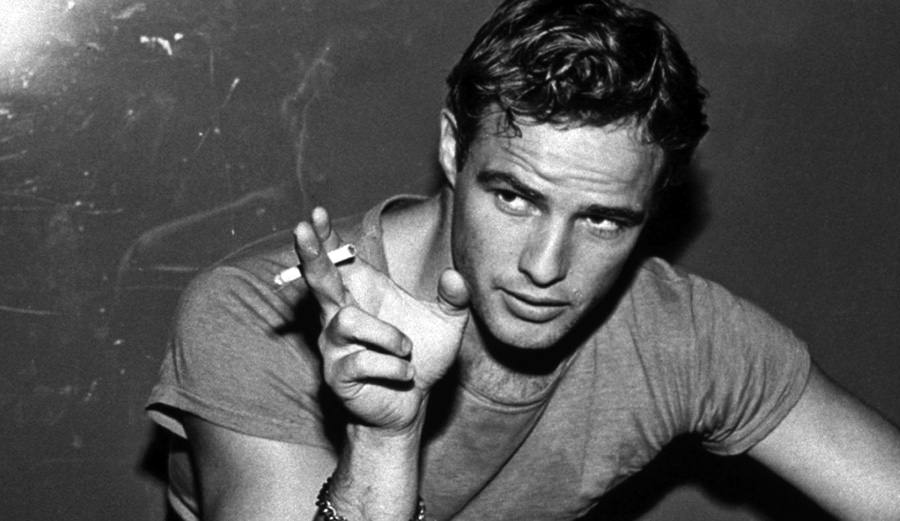 Marlon Brando single handedly redefined what it meant to be a movie actor. Not necessarily a movie star, they are not the same thing. A movie star is a product of the studio system who could be depended upon to make money for the producers of a motion picture. A star could be a great actor, in fact, he probably should be. But to Brando, the role was more important than the profit the film made. 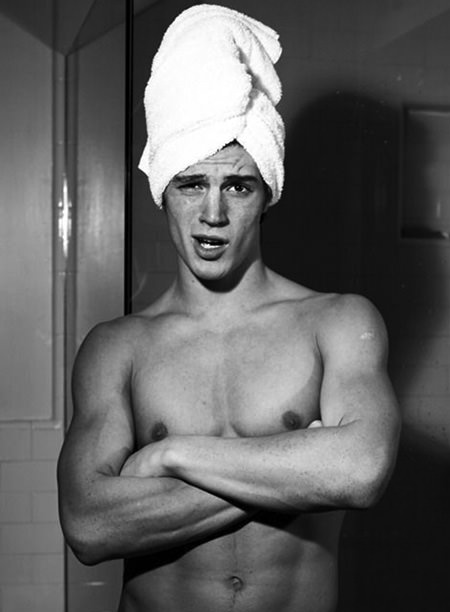 Brando was a student of the Stanislavsky Method Acting school, so to him the highest value was the emotion he brought to his roles. His stature as an actor is perhaps rivaled only by the immortal Laurence Olivier. Unlike Olivier, Brando turned his back on stage acting after he made his way into pictures, a decision for which he was regularly criticized. Critics would also note that for everyone involved in the art, Olivier was probably much easier to deal with than Brando.

Marlon Brando was born in Omaha, Nebraska, 1924. His father was pesticide and chemical feed manufacturer and his mother was, well, Dodie Brando was unconventional actress who smoked cigarettes, drove cars, and wore trousers. She was the administrator for a theater company and had helped Henry Fonda to get his acting career off the ground. Both of Brando's parents were alcoholics, sadly recalling later that: "The anguish that her drinking produced was that she preferred getting drunk to taking care of us".

Brando's father sent him to the Shattuck Military academy, but the regimental life of the academy did not suit him and he was expelled during his third year. After dropping out of high school he tried to enlist in the Army, but a football injury while at Shattuck had rendered him 4F. Instead of the service, he followed his older sisters to New York where they were studying acting.

Brando fell into the theater community because it was the first time in his life that he was accepted and even won praise. He became dedicated to Stella Adler's interpretation of the Stanislavsky system. The technique called for the actor to explore a character's insights and draw reference from personal experience. During one exercise, Adler told her students to act as though they were chickens, and an atom bomb was about to land on them. The other students ran about, clucking frantically. Brando's chicken calmly sat and laid an egg. When questioned about his unusual performance, Brando replied: "I'm a chicken, what do I know about bombs?"

In 1944, Brando debuted on Broadway in I Remember Mama. It still took him awhile to find his potential, including co-starring with Tallulah Bankhead in The Eagle has Two Heads. Bankhead had taken the role over one which had been written for her, Blanche DuBois in Tennessee William's A Streetcar Named Desire. When the show went on the road to prepare for Broadway, Brando was constantly at odds with the director and Bankhead, who reminded him unfavorably of his mother. He was finally let go in Boston, which was fortuitous because he was now free to appear as Stanley Kowalski in Streetcar. Bankhead sent her recommendation to director Elia Kazan.

There was some resistance to putting Brando in what would become his signature role. Williams wrote the play with a much older character in mind, but after seeing Brando read the playwright agreed he was the perfect choice and brought new dimensions to the part. Brando prepared for the part by studying aging boxer Rocky Graziano who was working out at a local gym. After the success of Streetcar on Broadway, Hollywood began to deluge Brando with screen test offers, but he remained mostly aloof, not wanting to be limited by the standard seven-year studio contract.

When Streetcar came to the screen in 1951, the script had to be modified for the sake of the sensors. In addition, veteran actress Jessica Tandy who played Blanche on Broadway was passed over for Gone With the Wind star, Vivien Leigh, who played the part in London. As it turned out, Leigh was Blanche DuBois and won the Oscar for Best Actress. The picture, director, and Brando were also nominated (supporting players Karl Malden and Kim Hunter won) and Brando emerged a bona fide star. 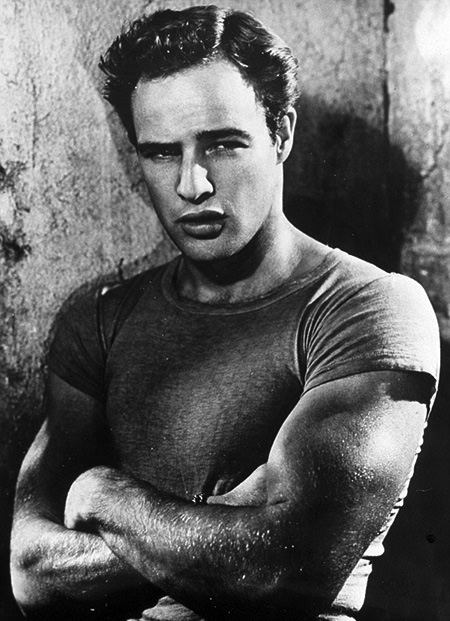 Star status was fleeting. Although he had success through the fifties in Viva Zapata (1952), Julius Caesar (1953), The Wild One (1954, Brando rode his own Triumph Thunderbird in the film), and On The Waterfront (1954), Brando's star began to fade. Perhaps it was because On The Waterfront had been such a tour de force (Brando won Best Actor for the role) that his next efforts failed to live up. Some critics feel that after such incredible success in his first six pictures, Brando chose not to work to his full potential in his succeeding films. He continued to be a box office draw for the rest of the decade, but as the sixties began, Brando was in a definite decline.

1962's Mutiny on the Bounty, filmed on location in Tahiti, became a fiasco as Brando became revolted with the motion picture industry. He inspired an article in The Saturday Evening Post headlined "Six Million Dollars down the drain: the Mutiny of Marlon Brando". Although he continued to get hired, Brando became box office poison through the sixties, although he did take up a number of social causes, including African American and Native American rights.

In 1972, director Francis Ford Coppola released what is sometimes called the best American picture of all time, The Godfather, and the picture was also a turning point for Brando, winning his second Oscar (he made history by turning down the award in protest over the treatment of American Indians by the film industry). He followed up The Godfather with The Last Tango in Paris (1972), but the sexual content of the picture overshadowed Brando's stellar performance. Brando made a well received, almost cameo appearance as the Man of Steel's father in Superman (1978, unused footage from the film would be used in later installments of the franchise after Brando's death).

Brando's last success would be Coppola's opus Apocalypse Now (1979). The picture was beset with delays and a troubled production (location shooting in the Philippines was interrupted by Typhoon Olga and star Martin Sheen had a heart attack while filming deep in the jungle), but the film was a hit, winning the Palme d'Or at Cannes and becoming a cultural icon.

Brando's health had begun to fail before shooting Apocalypse. His weight fluctuated constantly, topping 300 pounds on occasion, and he suffered from diabetes. On July 1, 2004, Marlon Brando died of respiratory failure with congestive heart failure. He was 80.

Marlon Brando is honored by a Star on the Hollywood Walk of Fame at 1765 Vine Street which was dedicated for his contributions to Motion Pictures.