At a time when female dancers on screen were there to make their male partners look good, Eleanor Powell was the most talented tap-dancer in Hollywood, perhaps the world.

Choose your CD format
or order disks individually: Add to Cart Add to wishlist
Play a sample episode from October 12, 1938:

For visual spectacle, few events in the Golden Age of Hollywood could match the Big Dance Number. There would not be a dry eye in the house when the hero made the ultimate sacrifice to save his friend, or when the pretty girl gets carried into the sunset by the man of her dreams, and abdominal muscles would actually get sore from laughing as the comic slipped on yet another banana peel, but the Big Dance Number was the Depression Era equivalent of a CGI-driven spaceship dogfight or a dinosaur battle. 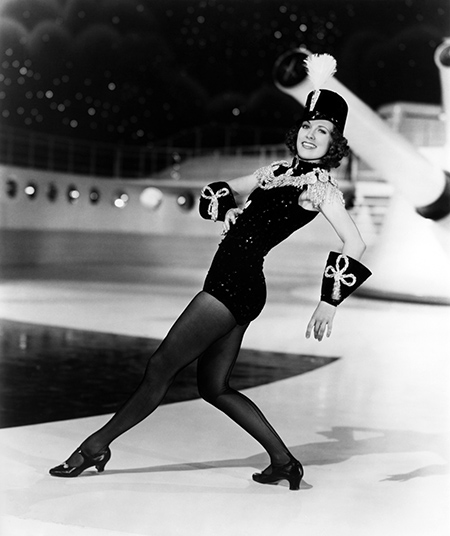 As marvelous as they were to watch, the Big Dance Numbers usually did very little to move the plot of the story, and eventually, audiences realized that even with all the pretty girls, spectacular costumes, elaborate set pieces, and blaring music, the Big Dance Number was as good a time as any to sneak out and use the restroom. Even after the lavish production numbers fell out of favor, it was hard to beat the sheer grace and athleticism of a well-trained couple or individual dancer giving their all, and few dance numbers were as impressive as a tap dance routine.

Tap would not have been as popular before sound technology became common. The graceful shuffle of a soft-shoe number may have worked with a phonograph overplay or accompanied by a house organ player, but with tap, the dancer's feet became a musical instrument (which made tap dancing one of the few forms of dance that would work on radio). There were several marvelous tap dancers on either side of the color line, but few of the male tap dancers could keep up with Eleanor Powell.

Actually, Hollywood wasn't quite sure what to do with Eleanor. A dance number was a showcase for the man's athleticism and virility, If there was a girl in the number, she was there for the man to woo, perhaps even dominate. With her machine-gun tapping, Eleanor was not one to be dominated. "Eleanor Powell, one of our greatest talents, is a bit too powerful for me," said the great Fred Astaire. "I love Eleanor Powell, but she dances like a man. She’s a remarkable dancer, but she has a very mannish style, and she’s a little big for me." By too big, he meant too big of a talent to compete with.

Born in Springfield, Massachusetts, 1912, Eleanor was a hopelessly shy little girl, so her mother sent her to dance school hoping to bring her out of her shell (interestingly, she studied ballet, not tap dancing). While she was visiting family in Atlantic City at the age of 11, vaudeville producer Gus Edwards saw Eleanor dancing on the beach and recruited her for his Kiddie Revue. 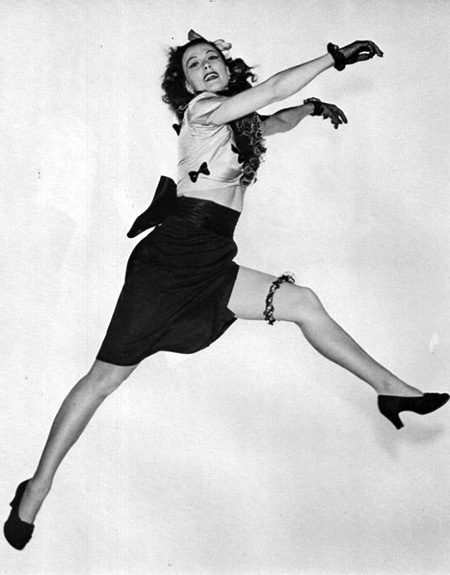 By the time she was 16, she made her Broadway debut in The Optimists (1928), but the show closed after just a few performances, and she found herself making the rounds of auditions. At almost every audition, she was asked if she could tap, so she began taking lessons at the Jack Donahue Dance School. She needed to wear surplus Army ammo belts filled with sand bags to keep her feet close enough to the ground, which would eventually define her style.

After a successful return to Broadway in a number of revues, she made her first film, George White's Scandals of 1935. Eleanor' first starring role was in At Home Abroad (1935) with Jack Benny and Frances Langford. She soon became one of MGM's most popular dancers. In 1943, Eleanor married then relative unknown Glenn Ford and had what would be the only child for both of them, Peter Ford, in 1945. After her marriage, Eleanor retired to become a full-time housewife and mother. However, as Ford's career took off, he became less interested in remaining faithful. The couple divorced in 1959.

Eleanor had been ordained as a minister by the Unity Church in 1952, and appeared on the Sunday morning television program, The Faith of Our Children, from 1953 to 1955. She kept up her dancing training, and after her divorce, with her son's encouragement, established a successful nightclub career. Although her last appearance before a studio camera had been in the Esther Williams vehicle, Duchess of Idaho (1950), interest in her films was renewed by the release of That's Entertainment! (1974) and its sequels in 1976 and 1994.

Eleanor Powell succumbed to cancer on February 11, 1982. She was 69. A Star on the Hollywood Walk of Fame at 1541 Vine St was dedicated posthumously on February 15, 1984, to honor Eleanor Powell's contributions to Motion Pictures.