Arguably the most important American playwright of the Twentieth Century, Arthur Miller's life was colored by his politics and family experience. He is best known for the classic play The Death of a Salesman, a poignant commentary on the American Dream.

Choose your CD format
or order disks individually: Add to Cart Add to wishlist
Play a sample episode from April 30, 1950:

"Lux Theater: All My Sons"

The opportunity to go to a play is a chance for us to step away from the real world for a short while, to lose ourselves in the world created by the drama. However, when the story comes from a truly great playwright, the stage becomes more than merely a portal for entertainment, it becomes a mirror where we see reflections of our own soul. 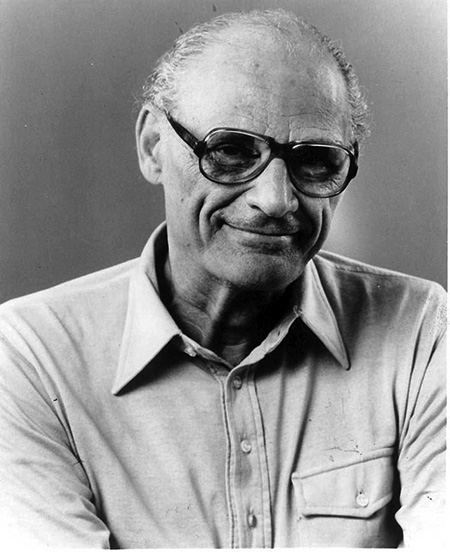 The period after the end of WWII was a time of great optimism and opportunity, but it was also a time of great dissatisfaction. We had won the War and made the world safe for Democracy, the wheels of industry were turning full tilt and there was more wealth than ever to go around, but was that all there was? Was that the sum-total of meaning in the lives that we struggled with every day of our lives? Playwright Arthur Miller tapped into the changing national psyche and asked these unanswerable puzzles. If he was not able to find the answers which met his or our satisfaction, he, at least, managed to keep us focused on the questions.

Arthur Asher Miller was born in Manhattan into a wealthy family of Jewish immigrants. His father, Isadore Miller, owned a ladies clothing manufacturing operation which employed 400 people. Isadore was respected and admired in the community, employed a chauffeur, had a house on 110th St in Manhattan and a summer place in Queens. When the Wall Street Crash of 1929 hit, Isadore lost everything, and the family moved to Gravesend, Brooklyn. Arthur saw first-hand how the Crash and sudden poverty took a toll on his father. Through high school, Arthur delivered bread every morning before school to help support the family and took a series of menial jobs to pay for his university tuition.

Entering the University of Michigan as a Journalism major, Arthur switched majors to English after writing his first play in 1936, No Villain. Arthur reportedly wrote the play in just six days to enter for the Hopwood Prize of $250, which it won. The script explores Marxist theory through the eyes of an individual who is facing ruin as the result of a labor strike. Writing dramas began to seem like a viable career, and Miller studied under Professor Kenneth Rowe on the structure and dynamics of writing plays.

In 1937, he wrote Honors at Dawn, which was also awarded the Hopwood Prize. After graduating from Michigan, he joined the Federal Theater Project (bypassing a lucrative offer to work for 20th Century Fox as a screenwriter), but Congress shut the Project down in 1939 over fears of Communist infiltration. Miller began working at the Brooklyn Navy Yard and contributing radio plays to CBS. He married Mary Grace Slattery in 1940 (the couple would have two children) and his first play to actually be produced made it to the stage the same year. The Man Who Had All the Luck was awarded the Theater Guild's National Award, but the production closed after four performances to disastrous reviews.

Miller was exempted from military service because of a high school knee injury. In 1941, he began writing All My Sons, which was produced in 1947. The play was a hit, establishing Miller as an important playwright and earning a Tony Award for Best Author. After spending six years crafting All My Sons, in 1948, Miller wrote the first act of Death of a Salesman in less than a day and completed the entire play in less than six weeks.

Death of a Salesman became a classic of the American and world stage. The story of Willy Loman is a tragedy of almost Shakespearean proportions which deals with disillusionment with the American Dream and the dreams of parents. The original Broadway run of Salesman, directed by Elia Kazan, was 742 performances and has been revived on Broadway four times.

Miller met pin-up girl and sex symbol Marilyn Monroe through Kazan in 1951, just after Marilyn signed a lucrative seven-year contract with 20th Century Fox. Miller and Monroe had a brief affair and afterward kept in contact as good friends. Miller's good friend, director Elia Kazan, was called to testify before the House Un-American Activities Committee in 1952. Kazan had in fact attended some Communist Party functions in his younger days, but became disillusioned with the Party during the Second World War. When faced with the alternatives of betraying a cause he did not believe in and protecting his rising Hollywood career, Kazan chose to name names. Miller had a visit with Kazan soon after his testimony, after which he traveled to Salem, Massachusetts, to do research on the witch trials of 1692. The result was The Crucible, which opened on Broadway in January 1953. Although the play was only moderately successful at the time, it has become the most frequently performed of Miller's works. Given its anti-McCarthyism themes, there is little wonder that the HUAC blocked Miller's passport application, barring him from attending the London premiere of The Crucible in 1954. Kazan's testimony broke up the friendship between him and Miller; they did not speak again for ten years. 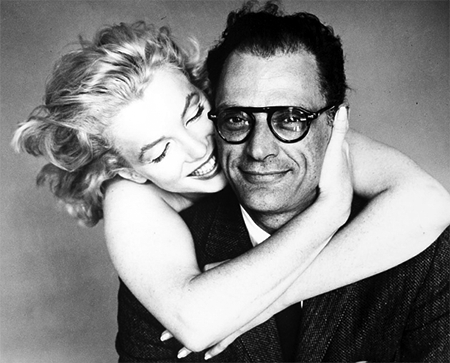 In 1956, Miller left his first wife, Mary Slattery, and married Marilyn Monroe. During the same year, he reapplied for a passport renewal, which attracted the attention of HUAC, and he was subpoenaed to appear before the Committee. Before testifying, he spoke to Committee Chairman Francis Walter (D-PA) and agreed to cooperate fully as long as he was not compelled to name names. Marilyn accompanied Miller to the hearing, risking her own career. Miller gave a detailed accounting of his own political activities, but then the Committee began demanding the names of friends and associates who had engaged in similar activities. Arthur refused and he was found guilty of Contempt of Congress. The conviction was eventually overturned, but the episode colored the rest of Miller's life and relationship with the Government.

Arthur began writing the script for The Misfits (1961), which was to star his wife and Clark Gable. The production was a troubled one. The cast and crew were subjected to 108 degree temperatures in the desert of northern Nevada, and Miller rewrote the script several time to fit changing concepts of the film. Worst of all, Arthur and Marilyn's marriage was disintegrating. As the marital troubles grew worse, Marilyn became more and more dependent upon prescription drugs and alcohol. Director John Huston suspended production for a period in August so she could check into a hospital to dry out. Although his health was questionable, Gable insisted in doing his own stunts for the picture, including being dragged 400 feet across a dry lake bed. Filming wrapped on November 4. Clark Gable died twelve days later. Arthur and Marilyn were divorced on January 20, 1961. The Misfits was released on February 1, 1961, Clark Gable's 60th birthday. Marilyn Monroe was found dead in her apartment on August 5, 1962, the victim of an apparent suicide.

Miller's play, After the Fall, opened on January 23, 1964. The play was a thinly disguised telling of the author's relationship with Marilyn Monroe. The play marked a thawing of Miller's relationship with Elia Kazan, with whom he had not spoken since before his appearance before the HUAC. Kazan directed the play and collaborated on the writing. Jacqueline Kennedy, who was a great admirer of Miller's work to that point, was very disappointed with the play. To President Kennedy's widow, loyalty was the most important test of character, and with his treatment of Marilyn's memory in the play, Miller failed the test.

Arthur Miller died on February 10, 2005, after battling cancer, pneumonia, and congestive heart disease. He was 89.  On December 11, 2015, the first play Arthur Miller wrote, No Villain, was given its world debut in a North London theater and received good reviews.