Choose your CD format
or order disks individually: Add to Cart Add to wishlist
Play a sample episode from August 03, 1947:

What is a Witch, and why were witches put on trial? The popular Halloween image of a crone attended by her black cat and casting spells seems highly inaccurate, although the practice of Wicca embraces some elements of this imagery. A witch is someone who uses magic or other supernatural means to inflict harm on others.

This alleged ability to bring harm to one's neighbors is the root of communal fear that drove the witch hunts of earlier centuries. In North America, the most famous of these was the Salem Witch Trial of 1692. Nearly three and a half centuries on, the societal implications of the Salem Witch Trial are worthy of consideration.

The Witch Trials are held as examples of mass hysteria and mob injustice, but they hold further lessons for modern Americans. The Trials have been held up as "the rock on which the theocracy shattered", bringing up huge implications for our First Amendment guarantees of the Separation of Church and State. They are also reflective of the growing moral divide between Rural and Urban sensibilities.

The longstanding belief that Satan would empower certain persons had flared many times throughout history.  In the Massachusetts bay hamlet of Salem Village (modern-day Danvers, Massachusetts) these fears combine with hardships related to a recent war between Britain and France over the North American Colonies, a smallpox epidemic, fears of attack from hostile local tribes, and a growing rivalry with the neighboring Salem Town (modern-day Salem, Massachusetts). 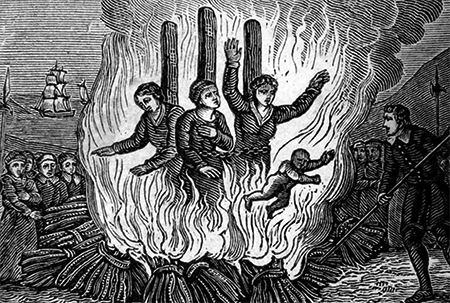 Although they were not the first English Colonists in North America, the Puritans were among the most successful. The Puritans were a group of British Protestants who believed that the Church of England was too closely related to the Catholic faith that it had broken off from.  This opinion was far from popular with their fellow Britons, leading to widespread persecution.

During the reign of King Charles I, many groups of Puritans chose to escape this persecution in the wilderness of North America. Owing to a combination of a strong work ethic and luck (providence?) the Massachusetts Puritans managed to mostly thrive, attracting other Colonists to the region. These newer newcomers rarely shared the Puritan fanaticism, and being the later arrivals, often found less success than their more established predecessors.

Salem Town was becoming a prosperous seaport, which attracted a more "worldly" populous that would inhabit the inland Salem Village where Puritan agriculture still dominated. The strife between the two communities led to Salem Village hiring its own minister (there would be a series of ministers leaving the Village due to unpaid salaries). In the summer of 1689, ordained minister Samuel Parris was hired to lead the Salem Village congregation.

Parris was born into a moderately wealthy family in London, emigrated to Boston to attend Harvard College, and managed his late father's estate in Barbados until forced to return to Massachusetts by a hurricane. Upon his return with his slave, Tituba, he married "the most beautiful woman in Salem Village", Elizabeth Eldridge, who would bear his three children.

After being hired as minister, Parris's daughter Betty along with her cousin Abigail Williams began behaving strangely. Modern science posits that the episodes of screaming, violent contortions, fits, and other uncontrollable outbursts may have been the result of being poisoned by ergot, a toxic fungus that can be found in wheat, rye, and other grains. The girls, however, claimed to have been bewitched by the slave, Tituba. 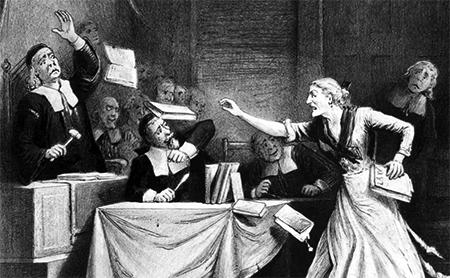 Parris beat his slave until she confessed to practicing witchcraft. The merits of such a confession are debatable, but as other girls in the community began to show signs of bewitchment, Tituba found herself in a position to make further accusations and avoid further persecution. Also accused were homeless Sarah Good and elderly Sarah Osborn. Unlike Tituba, the two Sarah's denied the charges and were prosecuted.

During the hysteria of the Witch Trials, more than two hundred would be accused of witchcraft, thirty would be found guilty, 19 hanged and five would die while in custody (Giles Corey refused to enter a plea and would be tortured to death when an attempt was made to extract a confession). That hysteria would have a lasting influence on the American criminal justice system, chiefly in the concept of presumed innocence (accused witches usually had to prove their innocence rather than the other way around), the admissibility of hearsay evidence, and the right of the accused to competent legal counsel and representation.

Regret stemming from participation in the 1692 hysteria seems to have come on swiftly. Noted Quaker and Puritan clergy stated the opinion that "it were better that one hundred Witches should live, than that one person be put to death for a witch, which is not a Witch". A day of fasting to atone for community guilt in "the late Tragedy, raised among us by Satan and his Instruments" was declared in January 1697.

As easy as it would be to blame the results of the Salem Witch Trials on the superstitions of a more primitive time and people. However, modern society is not as far removed from Colonial New England as it would like to believe. The obvious example of this is the mid-Twentieth Century Red Scare and Senator McCarthy's Anti-Communist Hearings.