Nominating Presidents, the Media and Where it All Began

As I sit here on this Labor Day weekend of an election year, it is impossible to avoid or ignore the pervasive media coverage of the Democratic National Convention just past and the Republican National Convention which is about to begin. These events are now national spectacles telecast to millions of viewers, with clips replayed hundreds of times for millions more. 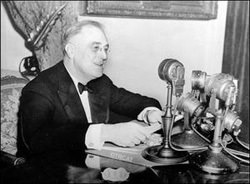 The centerpiece of each convention is the acceptance speech by the nominees. Certainly Barack Obama's Thursday night speech before more than 80,000 people in Denver has captured America's imagination, and the speeches by John McCain and Sarah Palin are highly anticipated media focus points. But until 1932, when Franklin Roosevelt—who was often accused of being nothing more than an agent of insignificant change by his opponent Herbert Hoover—chose to fly to Chicago to accept his party's nomination in person, candidates' acceptance speeches were delivered apart from the convention at some later date closer to the election itself, and until 1924 they were delivered to small personal gatherings. Radio changed all that along with the nature of politics forever. 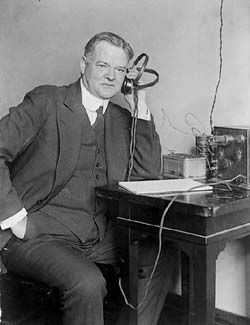 When KDKA Pittsburgh aired the 1920 election results to an audience estimated at between 500 and 1,000 devoted radio enthusiasts, the marriage between the media and the White House was born. Four years later both major party conventions were broadcast to groups of stations—there were no networks yet—which allowed the inner workings of politics to be heard by any American who owned or who had access to a radio receiver. The Republican convention was a fairly tepid affair that selected President Calvin Coolidge on the first ballot and made for pretty boring radio which prompted Will Rogers to quip that "It could have been done by postcard."

But the Democrats meeting in New York's Madison Square Garden provided wonderful political theater. Deadlocked, the convention dragged on for days; the idea of carefully choreographing and staging the event to maximize the positive impact on the audience at home was not even considered as delegates for William Gibbs McAdoo and New York's Catholic governor Al Smith battled it out, neither side willing to give in. For ninety-nine ballots the Democrats let it all hang out for America to hear. Finally, both candidates agreed to withdraw and the delegates, many of whom were out of money and wanted to go home, held four more ballots and finally selected a lawyer named John Davis from West Virginia to run against Coolidge.

It is not hard to imagine that the Democrats lack of showmanship—not to mention a steady flow of accusations that Davis was not ready for office—contributed in some part to Coolidge's triumph in November which he achieved despite a candidacy and a Republican party burdened with the baggage of major scandals and accusations of incompetence.  But what is most interesting is that these conventions were held at the end of June and the nominees did not accept their party's nomination until mid-August, and unlike any presidential campaign before, these speeches were carried by radio stations from coast to coast. 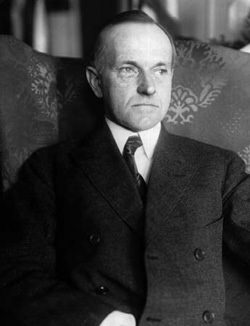 Davis went first speaking from Clarksburg, West Virginia. With little pomp or ceremony the novice politician gave it his best, but in the end his talk was not well received—he was criticized for being vague and lacking detail—a nd was easily trumped by Coolidge's speech given just three days later. But Coolidge gave his address before an audience at Continental Memorial Hall in Washington which must have added some luster to the sound of his talk.

In the end, as history tells us, Coolidge handily beat Davis and the Presidency retained in Republican hands for another eight years until FDR used radio to outmaneuver Herbert Hoover. But interestingly, it was Davis who probably understood the power of radio far better than Coolidge did, although he chose the time of his talk—8 PM—because he believed it would reach the greatest number of listeners, while Coolidge gave his at 9PM thus reaching more listeners on the West Coast. These strategies and calculations are still being considered and used today. Perhaps the power of radio on presidential politics was summed up best by candidate Davis who said: "The radio has been the most important development in the last 50 years.  It will make a great change in campaigning."

Be the first to comment on "Nominating Presidents, the Media and Where it All Began"