Tired of Knitting This Sweater: Gracie For President 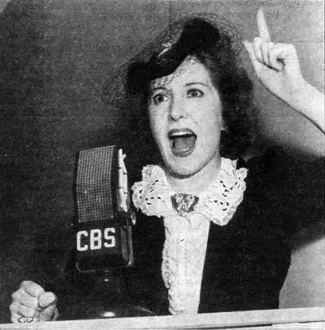 "I'm tired of knitting this sweater," comedienne Gracie Allen told her husband, George Burns one day, "I think I'll run for president this year." So began the fictional campaign of a big radio star of small physical stature, a girlish-voiced imp who injected silliness into American politics at the end of the Great Depression and the dawn of World War II.

Daughter of a vaudevillian, Allen was the co-star of The Burns and Allen Show, on which Allen's persona was an innocent, bubble-headed dame. With quips like "when I was born, I was so surprised I didn't talk for a year and a half." She developed a style that was at once disarming and cerebral, the sort of wide-eyed take on life's ironies we'd later see, without the pretense of ditziness, in Steven Wright.

Gracie Allen and George Burns also relished gimmicks, running farces, with the most famous being the "lost brother" ruse that ran throughout the mid 30's. In fact, the couple, who started as partners and became spouses, met under false pretenses. After taking in a show by Burns and his then-partner Billie Lorraine, Allen went backstage to solicit a partnership with the latter. She ran into Burns instead--thinking he was Lorraine and shrewd George went along with it, beginning a longtime partnership and romance.

It was fitting, then, that Allen would create one of her most memorable gags via one of her favorite methods, the hoax. In February of 1940, with Franklin Roosevelt and Wendell Willkie gearing up their respective campaigns, she went on the air announcing her candidacy. 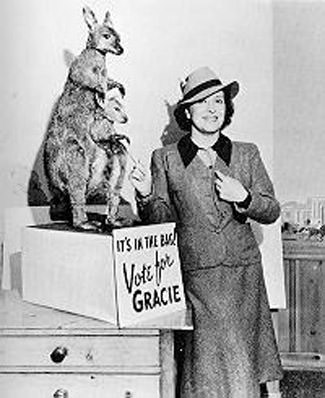 The themes and comedic style of the campaign were fairly consistent with Allen's well-known ditzy dame persona. Rather than making scathing remarks about either of the real candidates or vigorously attacking politics as a whole, Allen's style was gentler, always folding a charming, pure absurdity into the satire. For example, her party was "The Surprise Party," with a kangaroo mascot whose pouch bore the slogan "it's in the bag."

The platform simply promised to have Congress work on commission and to integrate Civil Service into all branches of government ("a little politeness goes a long way").

Allen urged the American public to take pride in the national debt, since "it's the biggest in the world." To the question of whether or not she'd recognize Russia, she rejoined "I don't know. I meet so many people." She refused to nominate a Vice President, vowing not to tolerate any vice in her administration. She wrote an open letter to the other candidates asking them to vote for her, and promised, if elected, to offer free correspondence courses to Americans, "so that people who can't find jobs in their own line will soon be without jobs in three or four different types of work." She told reporters she had some surprises up her sleeve, along with a box of raisins for an election-night snack. She also hatched the genius of a sew-on political button, which would prevent supporters from changing their minds.

The candidate to be the first female president promised key roles for the cast members of the radio program: for Frank Parker, Supreme Court Justice; for Ray Noble, Secretary of the Navy, etc. George's role in the campaign/running radio gag was the naysayer. After plugging the campaign on the popular radio shows of the day, The Jack Benny Program, Texaco Star Theatre and others, Allen landed a plum spot as the guest of honor at the Women's National Press Club, having been invited by Eleanor Roosevelt.

Allen and Burns boarded a train for a whistle-stop tour of the nation, and in May, the Surprise Party held its national convention in Omaha. Allen's speech was broadcast live on NBC. One of the campaign promises she revealed was to bring Maine and Vermont back into the Union.

The campaign met a warm reception, with Allen landing the endorsement of Harvard University (of which FDR was actually an alum!). She also won an office for which she'd never run, mayor of the small town of Monominee, MI. She of course declined, pointing out "a person can't live everywhere."

Gracie is on record as saying "the president of today is just the postage stamp of tomorrow." Most would argue that the man who defeated her in 1940, FDR, amounted to much more than that. However, most would also agree that, among the losers, she was much funnier than Wendell Willkie, and possibly even better remembered.

<< More old time radio articles or read Nominating Presidents, The Media, and Where It All Began >>

Additional Reading: "Gracie Allen For President 1940: Vote with the Surpise Party"
by William Carroll is a great read about the spoofed presidential campaign.

Spoiler : First of all, thank you for maintaining your site and the excellent audio recordings that you sell at a reasonable price! I'm not a huge customer, but I've ordered a few things from you in the past. Thank you again for all that you do for OTR! (Now if there was just a magic wand we could wave to restore all the lost episodes of our favorite shows!)