After working as a tenor on The Jack Benny Show, Frank Parker had his own radio show in syndication.

"Its a Lovely Day"

Before Kenny Baker, before Dennis Day, Jack Benny had another Irish tenor, except that this one was Italian-American. When Jack made the transition from vaudeville to Radio there was no stopping him, but it took a few tries before he completely developed his style.

When Jack began hosting The Canada Dry Show in 1932 the format was a nearly direct transition from vaudeville with Jack standing in front of the microphone, telling jokes and introducing musical numbers. Mary Livingstone was the featured singer in some of the early programs. 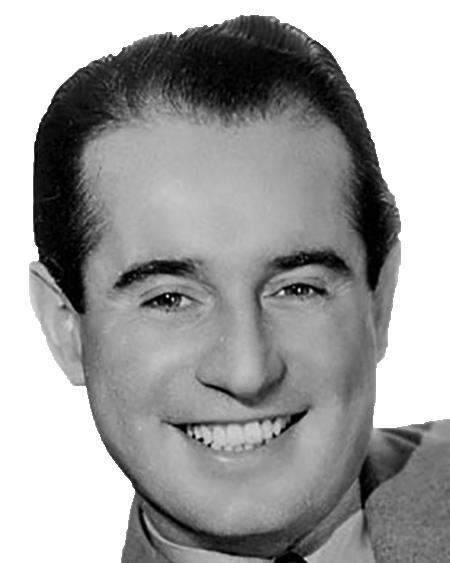 For 1933's The Chevrolet Show, Jack began putting together the 'show within a show' format that would serve him for several decades. On October 1, 1933, Jack's Gang was joined by tenor Frank Parker.

Parker was born Frank Ciccio in New York City, in 1903. His family was able to send him to the Milan Conservatory of Music, and he began singing professionally with bands like Harry Horlick's A & P Gypsies in 1926. He got his start singing for fun while in the dancing company of Little Nellie Kelly where he quickly came up through the ranks of understudy roles.

Despite his ethnicity, Frank's tenor voice was perfect for Irish songs, which attracted the attention of The Eveready Hour where the regular tenor had fallen ill in 1928. After a season on The Jack Benny Program, Parker began appearing in films, including a starring role in Sweet Surrender (1935, Universal). Although his big-screen career never really took off, Jack enjoyed Hollywood for the opportunity to play polo regularly.

Parker also appeared on WEAF New York programs such as The Atlantic Family on Tour, with Frank Parker. In 1937, he began appearing with Andre Kostelanetz beginning with a summer replacement series for Chesterfield Cigarettes. Kostelanetz and Parker continued to partner from New York until 1943 when Frank became the featured singer for Your Home Front Reporter.

The Teleways Transcription Service advertised "The Frank Parker Show, 156 Brilliant 15 Minute Musical Programs" in 1949. The ad showed a drawing of Frank's smiling face and told of where the audience would recognize the various talents on the program: Frank had been with Jack, the Modernaires from Glenn Miller, Paul Baron's Orchestra had played with Hildegarde, and Kay Lorraine was a singer with The Hit Parade. Andre Baruch held the Announcing duties.

Baruch opens each episode by announcing Frank Parker as "America's Greatest Romantic Tenor" and "Beauty at its Best" in the lovely Kay Lorraine. The singers' signature songs are "I Love You" for Frank and "Embraceable You" for Lorraine. Although Andre is conversational between the numbers, the show is about the music and there are few jokes told during the quarter-hour.

As radio began to give way to the small screen, Frank became the host of Bride and Groom on CBS TV. The show featured couples who had applied to have their wedding ceremonies broadcast on daytime television.

Frank Parker was awarded a Star on the Hollywood Walk of Fame at 6821 Hollywood Blvd for his contributions to Radio. He eventually retired to Titusville, Florida, where he passed away on January 1, 1999. He was 95.