Your Navy Show with Tommy Dorsey

The most important part of the modern Navy is its Sailors.

Choose your CD format
or order disks individually: Add to Cart Add to wishlist
Play a sample episode from February 25, 1952:

"Tommy Dorsey On Sunny Side of the Street" Ever since President George Washington signed the Naval Act of 1794, The United States Navy has been a force to be reckoned with on the international scene. For many years, the American fleet built its reputation more for scrappiness than naval might but began to turn that around in the 1880s as "the new steel navy" was born. In the years after the Great War, the American Navy began to challenge even the mighty Royal Navy for domination of the seas.

The attack on Pearl Harbor presented a setback for the Pacific Fleet, but not as much of one as the Empire of Japan might have hoped. The American Navy dominated the Pacific, handily decimating Japanese shipping and air power. On the other side of the planet, the U.S. Navy's entry into the War kept the lifeline across the Atlantic open to Europe, allowing the Allies to bring the War to the Fascists.

The Cold War brought new threats, ad the U.S. Navy proudly stepped up to the plate to defend freedom. By the early 1950s, the aircraft carriers which proved so vital during the War were adapting to the jet age. Atomic weapons were on everyone's minds, but the Navy would make its own way into the Nuclear Age in the middle of the decade with the first atomic-powered submarine with nuclear-powered carriers in the early 1960s. The electronics boom would make the conventional weapons of the surface fleet even more deadly.

Despite, or perhaps because of the growing complexity of the technology that went into ships and Naval Warfare, the Fleet's most valuable asset was and remains its Sailors. The 'Old Salts" who fought the War would not be around forever, ad no expense would be spared to attract the best of America's young people to man the modern Fleet. Syndicated programs like Your Navy Show. 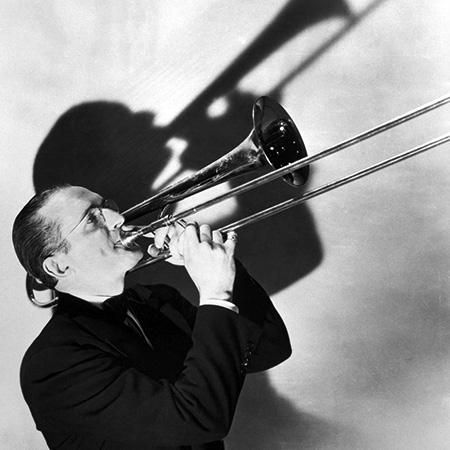 The quarter-hour programs were hosted by announcer Don Wilson. Wilson would inject some bit of nautical palaver into all of his introductions and announcements. Don's most important job on the show is to describe the various programs and opportunities the Navy offers to fit young Americans.

The real star of the show is "Captain" Tommy Dorsey and his Orchestra. "The Sentimental Gentleman of Swing" had been in bands since the early 1920s when his big brother Jimmy recommended him to the leader of the Scranton Sirens when the territorial outfit needed a new trombonist. Although Tommy's band was sometimes criticized for lacking any "jazz feeling", Sinatra joined the outfit in the early 1940s and cut more than eighty discs.

Swing may have been the music that won the War, but it would begin to fall from popularity soon after Your Navy Show was syndicated. However, the film The Fabulous Dorseys (1947, United Artists) helped to keep the band relevant. The Dorsey Brothers Orchestra would go on to embrace Rock and Roll (whether rock and roll would embrace the Dorsey Bros is debatable), while Navy Recruiting would focus its radio efforts around Country and Western music for the next several years.

These recordings are also part of the US Navy Shows compilation.