During War time Radio became an important propaganda tool. One of the most notorious efforts was Tokyo Rose. 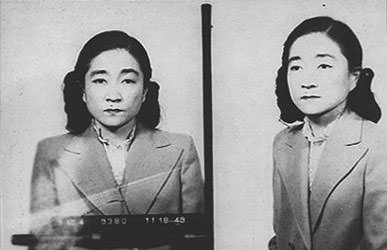 American born, Iva Toguri D'Aquino was visiting an ill aunt in Japan during the attack on Pearl Harbor. Unable to return to the US and in need of money, she searched for work. With her husky voice and sense of humor Iva secured a job at Tokyo Radio broadcasting Japanese propaganda. American troops tuned in, enjoying her bawdy sense of humor and sultry ways. Billed as Orphan Ann, she began her shows with, "Hello boys. This is the voice you love to hate. Iva was later put on trial for being the "Tokyo Rose. After questioning of whether she was the Toyko Rose, Iva answered yes, thinking that Rose was an endearing character to the Americans. Wrong. Although there was no actual one Tokyo Rose, Iva was convicted of treason and sentenced to 10 years in jail though she was released after 6 for good behavior. In the 1970's, President Ford pardoned her thus clearing her name. 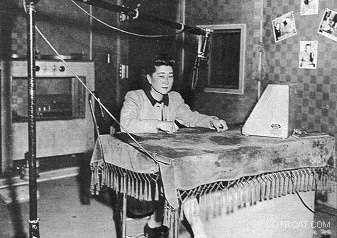 "Tokyo Rose is a name that American GIs invented during WWII to refer to a handful Japanese female voices broadcasting on Japanese radio. Although the shows were created to lower American morale, GIs positioned in the Pacific enjoyed tuning in. To make the boys homesick, these Japanese propaganda shows played American music and told stories of GIs' women cavorting with other men at home. Foumy (Madame Tojo), Saisho and Myrtle (Little Margie) Lipton, and Iva Toguri D'Aquino (Orphan Ann) were among the favorite women broadcasters.

To enjoy more WWII propaganda broadcasts, tune in to Charlie and His Orchestra, a German show broadcast for and American Forces. (Please note that many of the rare recordings in this collection may be of inferior sound quality.)