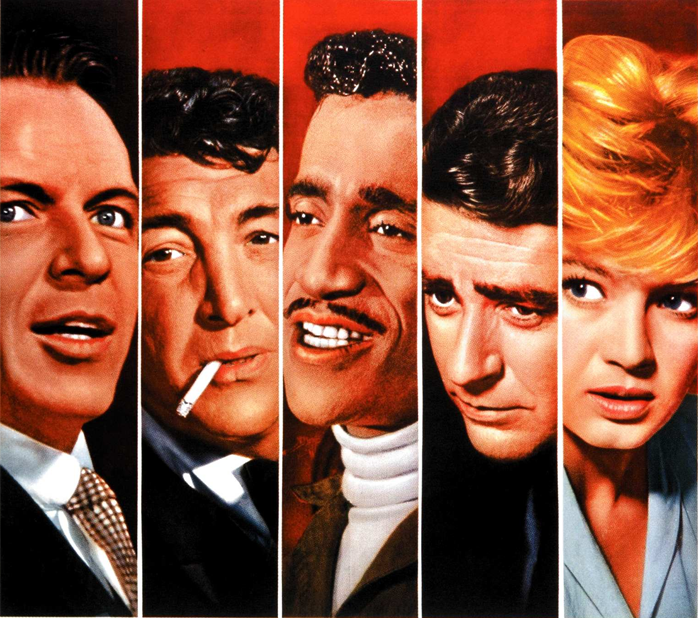 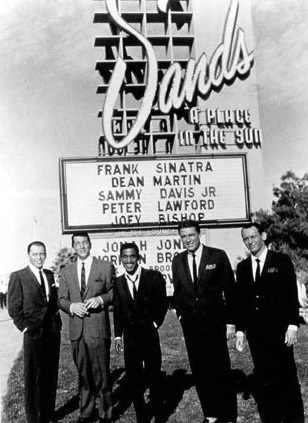 August 2011 is the anniversary of the release of the Rat Pack movie "Oceans 11". The movie, released in 1960, is one of those that allow Hollywood A-Listers to display themselves as they saw themselves.

The so-called Sixties Rat Pack was an incredibly talented group, but their influence on style, entertainment, and even the politics far outweigh their individual or combined talents. This incarnation of the group never called themselves the Rat Pack; to themselves the Clan or the Summit. They were lead by Frank Sinatra, who had been an idol to a generation of "bobby-soxers" in the 40s and when his career began to flag, it was given new life by an Oscar winning performance in the film "From Here to Eternity"

The core of this later group of Rat Packers also included Sammy Davis Jr and Dean Martin. Like Sinatra, Martin was the child of Italian immigrant parents, and there is speculation that he had help from organized crime figures to get his career started. He rose to prominence teamed with comedian Jerry Lewis. The team had been hugely popular, but over time there act became formulaic, and after ten years together the act split in 1956. Dean found success as a solo performer recording and performing in concerts and night clubs. He work hard to be taken seriously as a movie actor. His success in film was largely based on his being recognized as a singer, and in turn his music success fed his popularity as a Las Vegas singer.

Sammy Davis Jr. began dancing in his father and "uncle's" vaudeville act as a small child. While serving in the Army during WWII he was exposed to the racial prejudice that his father had tried to shield him from. He was assigned to a special services Integrated Entertainment unit, and he found that the spot light protected him from some of the racism. He returned to the family act after leaving the service and was soon finding success on his own. In 1954 he was in a near fatal auto crash in which he lost his left eye. While recovering he had several visits from his good friend who discussed the similar struggles of the Jewish people and African Americans. As a result of these conversations Davis converted to Judaism. Davis became a headliner in Las Vegas, but met with racial barriers there as well (one accomplishment of the Rat Pack was to break down casino segregation by refusing to perform in or patronize casinos that practiced segregation.) 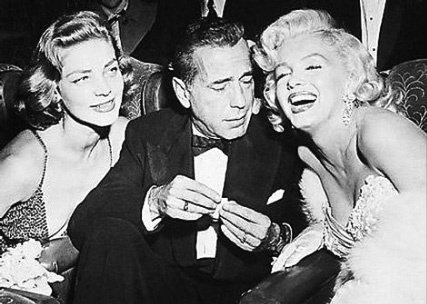 Rounding out the cast of Oceans 11 were the rest of the Rat Pack, Joey Bishop and Peter Lawford (who was also John Kennedy's brother in law). The film is a heist story where war buddies from the 82nd Airborne knockoff five Las Vegas casinos at one time. The military elitism of the paratroopers (Paratroopers can get away with it, even deserve to get away with it, because they are Paratroopers) is neatly reflected by the on and off screen attitudes of the Rat Pack.

The Rat Pack was all about elitism. The concept of the Rat Pack predated this powerful group of friends. The whole thing started out as almost a family thing--a very wealthy family thing.

The Holmby Hills neighborhood of LA is part of the "Platinum Triangle", along with Bel Air and Beverly Hills. Walt Disney built his dream home there, and it has been the home of Bing Crosby, Lucille Ball, Judy Garland and her husband Sid Luft, Lana Turner, Jean Harlow, and the Bogarts, Humphrey and Lauren (Bacall).

Just like any neighborhood, the neighbors liked to get together socially. When the neighbors are the cream of the Hollywood A-list, the parties can become very interesting indeed. 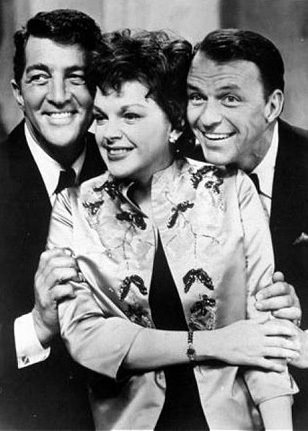 There are several versions of how the Holmby Hills Rat Pack got its name; stories include the aftermath of dinner parties at the Bogarts' or Judy Garland's. The most colorful involves Frank Sinatra (who would have been a Junior member of the Rat Pack at this time) organizing a field trip to Las Vegas to see Noel Coward debut at the Desert Inn. While the group was for the most part away from home and kids, Sinatra implemented a set of rules designed to keep the party rolling and merriment at a peak (at one point there was a room service order for 300 Bloody Marys.)

Whether it was during the fourth day of this epic party or another drunken occasion back in Holmby Hills, Lauren Bacall is credited with coming into the room, surveying the condition of her husband and his bleary eyed companions, and stating "You all look like a goddamn rat pack." This was very funny to the assembled hang-over sufferers.

The Holmby Hills Rat pack adopted their own coat of arms (a rat gnawing a human hand) and motto ("Never Rat on a Rat"). Members of the group included Bogie and Bacall, Judy Garland and Sid Luft, David Niven and his wife Hjordis, restaurant owner Mike Romanoff and his wife Gloria, Hollywood agent Swifty Lazar, author Nathaniel Benchley, and Sinatra, along with others of the Hollywood "In Crowd".

Sinatra was certainly famous enough to be part of the group. He had moved his family to Holmby in '49. After separating from his first wife he stayed with the Bogart's on several occasions. Bogie was everything that Sinatra wanted to be; successful, aloof, tough yet tender, romantic, loyal and often drunk (as well as married to Lauren Bacall!) The Bogart's were in some ways substitute parents to Sinatra. 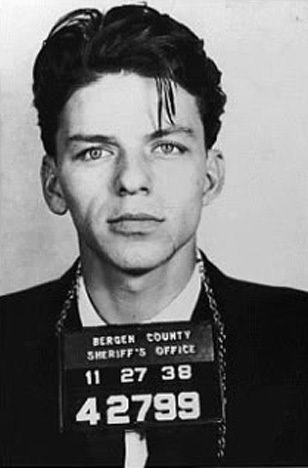 Neighbor Judy Garland was another Rat Pack member who had the fame and A-list clout to thumb her nose at almost anyone who didn't approve of her actions or attitudes. She began playing Vegas as early as 1931, with her sister's vaudeville act, managed by their bisexual father. When she landed at MGM, studio hands tried to "help" her by giving her amphetamines and barbiturates to deal with the pressures of being a child super star. The Wizard of Oz would have been the role of a lifetime for anyone, but Judy continued to seek success. She was never comfortable with her image or looks; when she started at MGM at age 13 she was told she was too old to be a child star, yet she wasn't allowed a "grown-up" role until the age of 21 when she appeared in Introducing Laura Mars. She would suffer a nervous breakdown in 1947 and was eventually let go by MGM, but she managed to make a come back through her concert appearances. Las Vegas, perhaps not the healthiest of environments, became a regular stop in her schedule. (One engagement at the New Frontier Hotel had to be extended so that she could pay her husband Sid Luft's gambling debts; fans claim to have heard her shrieking at Sid back stage for his losses.) Judy, along with Sinatra, was a link between Holmby Hills and the Sixties Rat Pack. During a Rat Pack Revival Tour in 1987 with Frank, Sammy and Dean, Dean left the tour soon after it started. Judy's daughter, Liza Minelli, stepped in and the Tour went on to terrific reception.

The early Rat Pack would have stayed simply a drunken neighborhood association if it hadn't been for a report in the gossip column of a NY newspaper. On Dec 15, 1955, Joe Hyams reported "the first annual meeting" of the Rat Pack at Rominoff's restaurant to elect officers. The supposed "officers" were Sinatra (pack master), Judy Garland (first vice-president), Bacall (den mother), Sid Luft (cage master), Bogart (rat in charge of public relations), Swifty Lazar (recording secretary and treasurer), Nathaniel Benchley (historian), with Bogie taking the role as "Rat in charge of Public Relations.

After Bogart's death in 1957, Sinatra went into a depression, canceling his scheduled performances at the Copa Cabana in NY. Returning to LA he began to woe Bacall, eventually becoming engaged to her. He called it off when Swifty Lazar spilled the beans to gossip columnist Louella Parsons.

Bogie had been the focal point of the Holmby Hills group, but Sinatra set about putting together a Rat Pack for a new generation. Las Vegas casino owners owe him a major debt of gratitude for it. The group of serious partyers were a guaranteed hit when they performed, and would often show up at each others performances as an "unrehearsed" addition (casino marquees would read "DEAN MARTIN- MAYBE FRANK-MAYBE SAMMY"). 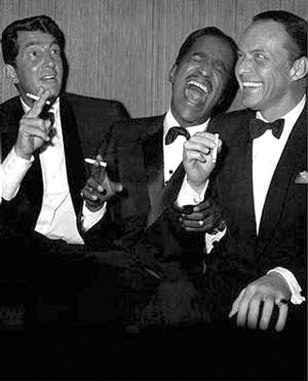 The Rat Pack was very much a part of the "Camelot" ethos of the early sixties. In fact it was a falling out between Sinatra and the Kennedy's that removed Lawford from the group. John F Kennedy had planned to stay at Sinatra's home during a visit to California, but was advised against it because of Sinatra's mafia connections. Kennedy chose to stay with Bing Crosby instead and Lawford lost his roles in 4 for Texas and Robin and the 7 Hoods.

The Rat Pack were primarily Movie entertainers. Especially the Holmby Hills faction appeared on radio several times, mostly in support of their film careers. Sinatra and Dean Martin, as crooners had a good deal of radio exposure. Although most of the Rat Pack had liberal political leanings, they were Patriots and most appeared on AFRS programs like Command Performance.

Bogie and Bacall met on the set of "To Have and Have Not", so the Lux Radio Theater treatment of that film is in this collection, along with other great Bogart Films. Before his comeback with From Here to Eternity Sinatra had a short series on the radio as a "footloose and fancy free young man" who couldn't hold a job, Rocky Fortune. Ms. Garland and Dean Martin are separately showcased in several guest spots as well the Lux treatment of the Wizard of Oz. An episode of the Dean Martin-Jerry Lewis Show is included as well. Finally there are several episodes of Bold Venture, a pre-recorded radio adventure drama by Bogie and Bacall.