An American, platinum-blond film actress and sex symbol of the 1930s, Jean Harlow is known as the first Hollywood bombshell. 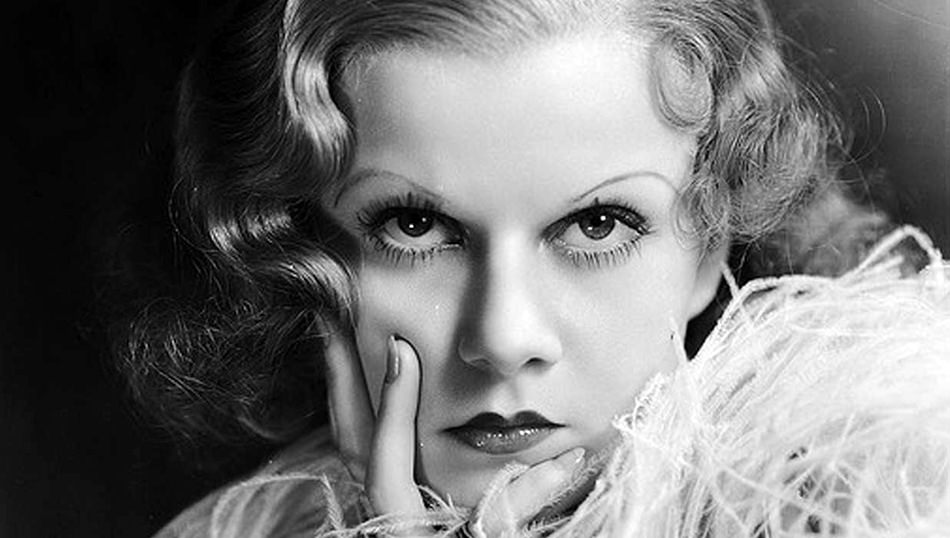 It is easy to understand how publicity department for Howard Hughes’s movie company would come up with a term that would be forever associated with Hughes’s discovery for his WWI epic, Hell’s Angels. The girl was Jean Harlow, and she would become the original Platinum Blonde. 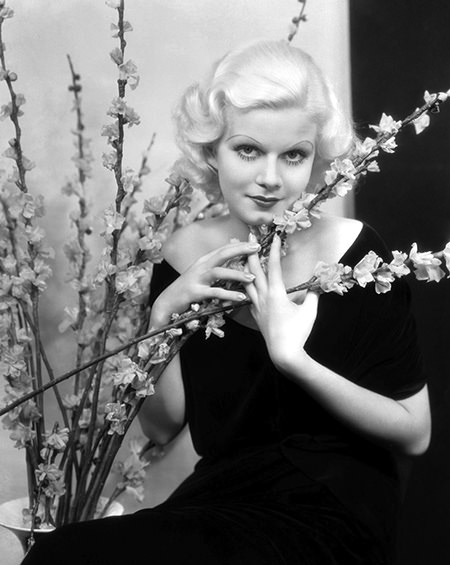 Her father Mont Clair Carpenter, a Kansas City dentist, wanted a boy, perhaps hoping that would make life with his difficult wife easier. The boy would have been named Harlow, so the girl (born March 3, 1911) was christened with the feminine version, Harlean, but to everyone she was just Baby (she didn't realize her real name was Harlean until she was five). Baby became the center of Mother Jean's world, making life even more difficult for Carpenter, and he granted Mother Jean a divorce in 1922.

Baby went to Hollywood with Mother Jean who hoped to begin a movie career, but the studios were not interested in a 32-year-old when they had so many pretty teenagers to choose from. At school, Baby hob-nobbed with future movie stars and the children of stars, but she was forced to drop out when finances dwindled. Her father threatened to disinherit Baby if Mother Jean did not return to K.C.

A few weeks later, Carpenter paid for Baby to attend Camp Cha-Ton-Ka in Michigan, where she was stricken with scarlet fever. After her recovery, she was enrolled in the Ferry Hall girls prep school in Lake Forest, Illinois (in part so that Mother Jean could be closer to her boyfriend in Chicago). Baby's "big sister" at the school introduced her to 19-year-old Chuck McGrew, heir to a sizable fortune. Chuck and Baby married in 1927 and moved to Beverly Hills where Baby quickly adapted to the easy life of a pampered socialite.

The easy life may have been too much for McGrew, however, and when he came into his inheritance began to drink heavily. The couple divorced in 1929. Aspiring actress Rosalie Roy was part of Baby's circle, and asked her to drive her to an appointment at Fox Studios. The executives there were much more interested in Baby than Rosalie, who bet her friend that she wouldn't have the guts to audition. Baby went to Central Casting and signed up with her mother's maiden name, Jean Harlow.

Baby signed a contract with Hal Roach studios and appeared in a few small silent film, including a co-starring role in Laurel and Hardy's Double Whoopee (1929). In 1929, Hollywood was still reeling from Al Jolson's The Jazz Singer (1927) "when the movies learned to talk". Millionaire Howard Hughes had already spent a fortune producing his WWI flying epic Hell's Angels as a silent picture, now he wanted to reshoot parts of it to make it a talkie. Unfortunately, his leading actress, Greta Nissen, had a thick and unshakeable Norwegian accent. A member of the company spotted Jean Harlow in Double Whoopee and pointed her out to Hughes. 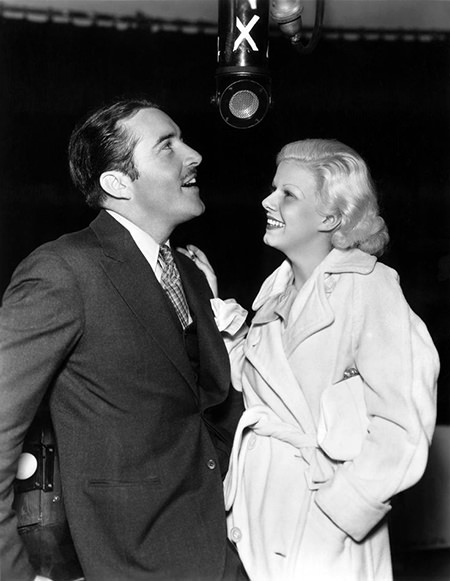 Hughes signed Baby Jean to a $100 per week, five-year contract. He also offered $10,000 dollars to any beautician who could duplicate the hair color of his Platinum Blonde star. Her hairdresser later shared the secret: "We used peroxide, ammonia, Clorox, and Lux flakes! Can you believe that?"

Unsure how to use their new sex symbol, Hughes loaned Harlow to other studios. She made Platinum Blonde (1931), directed by Frank Capra, for Columbia. The picture was only moderately successful but grew in importance as Capra's fame increased and is an important piece of the Jean Harlow legend. Harlow half-heartedly denied dying her hair, commenting that if not for its color "Hollywood wouldn't know I'm alive."

Director Paul Bern knew she was alive. He and Jean met just before the opening of Hell's Angels, and he began to help her with her career. There were times when Bern was the only one who took her seriously as an actress, and he helped to convince MGM to buy out her contract with Hughes and sign her. Harlow stood out from MGM's elegant leading ladies as somewhat of a "floozy", but the studio did give her superior roles that took advantage of her comedic talent as well as her looks. Beginning with Red Dust (1932), Jean starred in six films with Clark Gable. Bern and Harlow were married in 1932, but after two months of marriage (while Red Dust was being filmed) Bern was found shot dead in their home. There was speculation that Jean shot her husband, as well as a theory that he had been shot by a former lover and the studio covered it up. Bern's death was officially ruled a suicide, and Jean emerged from the scandal more popular than ever.

After Bern's suicide, Jean began an affair with Max Baer, who was separated from his wife at the time. Nonetheless, divorce proceedings began naming Harlow for "alienation of affection". Wanting to avoid another scandal, the studio arranged a marriage for her with cinematographer Harold Rosson. Rosson and Harlow played their roles and quietly divorced after eight months. 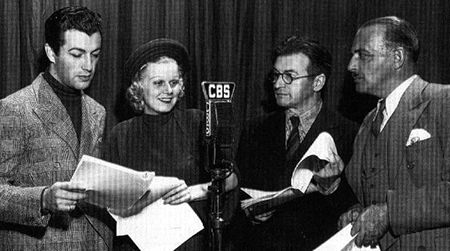 Baby went on to team with Lionel Barrymore, Franchot Tone, Wallace Beery, Myrna Loy, William Powell, Cary Grant and James Stewart, becoming one of the strongest box office draws of the Thirties. Stewart said of working with Baby: "...the director, wasn't too pleased by the way I did the smooching. He made us repeat the scene about half a dozen times... I botched it up on purpose. That Jean Harlow sure was a good kisser." Harlow became involved with William Powell, dashing star of the Thin Man films. The couple were reportedly engaged for more than two years but feared that the studio would not approve the match. Also, Baby wanted kids while the much older Powell did not.

Jean Harlow's last film was Saratoga with Clark Gable. Filming was to begin in March 1937 but was delayed after Jean developed septicemia after a wisdom tooth extraction and had to be hospitalized. Productions had been delayed by Harlow's health before, but she was such a consistent money maker that the studio was forgiving. As shooting for Saratoga continued, Jean developed other symptoms. Her friend and co-star Myrna Loy noted her gray pallor and weight gain. Doctors diagnosed influenza and later an inflamed gall bladder, but, in fact, her kidneys were shutting down. On May 29, she was shooting a scene where her character had a fever, but she was not able to continue as she was even sicker than the character. She asked to be taken to her dressing room and that Powell be contacted. 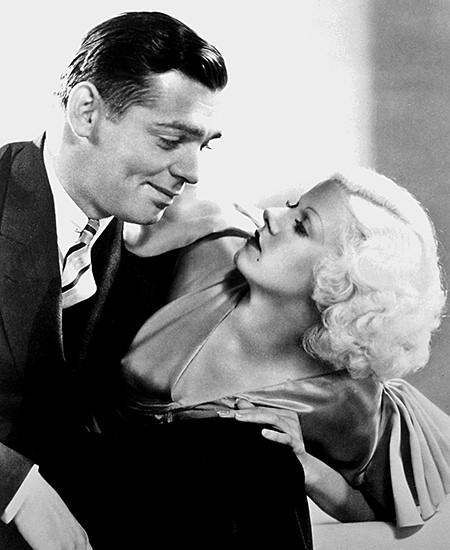 Powell took her home and stopped by daily to check on her. On June 3, she said that she felt much better and would return to the set on Monday, June 7. On the 6th, She told Powell she could not see him or determine how many finger he was holding up. She was taken to a hospital where she slipped into a coma. She passed away at 11:26 the next morning at the age of 26.

When Gable visited her during the last days, he reported that her kisses smelled of urine. Myrna Loy had noticed her weight gain. These are both indications of kidney failure, Baby's body was not able to dispose of the toxins it was generating. What Gable noticed was her system trying to get rid of the toxins through her lungs since her kidneys did not work. Although it is commonly reported that her kidneys were weakened from her childhood bout with scarlet fever, it should be noted that her hair treatments mixing Clorox bleach and ammonia produced a noxious cloud of hydrochloric acid which may have contributed to her kidney problems.

A person can remain reasonably healthy with as little as 10% kidney functionality. Today, dialysis treatment and/or kidney transplant would have saved Jean Harlow's life, but the technology simply did not exist in the 1930's.

It is reported that "The day Baby died there wasn't one sound in the commissary for three hours." When she was laid to rest, she held a single white gardenia and a note which read "Good night, my dearest darling", reportedly written by William Powell. Powell paid for Baby's final resting place, a $25,000 9x10 foot private mausoleum in Forest Lawn, and he reserved a spot next to her for her mother and himself. Later that year he was diagnosed with cancer, but he fought it with surgery and experimental radiation therapy. He later married actress Diana Lewis and lived in Palm Springs where he died in 1984 at the age of 91. His ashes are buried near his son and wife at Desert Memorial Park in Cathedral City, California.

Jean Harlow's contributions to Motion Pictures are honored with a Star on the Hollywood Walk of Fame at 6910 Hollywood Blvd. There is a Star for William Powell's Motion Picture work at 1636 Vine St.