NBC celebrates its first 50 years on the air with a retrospective featuring bits from its most popular shows. 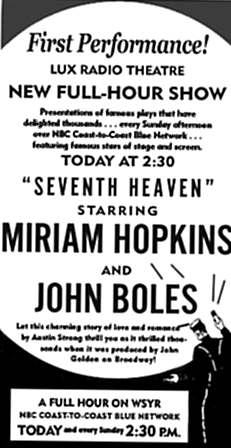 ITo celebrate 50 years of broadcast, NBC produced a radio show with highlights from those 50 years with The First Fabulous Fifty.

RCA created NBC in 1926. The First Fabulous Fifty starts at the party for the first NBC broadcast in November 1926 at the Waldorf Astoria.

On January 4th, 1928, NBC Radio red network and blue network combined with other networks to broadcast one show NBC's Dodge Victory Hour to 26,000,000 people at one time. It was epic radio listening and the first time the entire country heard the same program together united.

This birthday party covered everything from Will Rogers, Amos and Andy to the first moon walk. Hosted by Ben Grauer, Bob Hope, Bing Crosby, Arlene Francis and John Chancellor, the show brings back great memories for those who lived them and lots of fun for fans of Old-Time Radio.

In 1934, The FCC (Federal Communications Commission) broke up NBC and the Blue Network eventually in 1945 became ABC. The First Fabulous Fifty highlights the history of NBC Radio Network with clips from the old time radio shows.