Born with a marquee-ready name, Marvel Marilyn Maxwell, she was known as “the other Marilyn”.

Choose your CD format
or order disks individually: Add to Cart Add to wishlist
Play a sample episode from January 24, 1950: 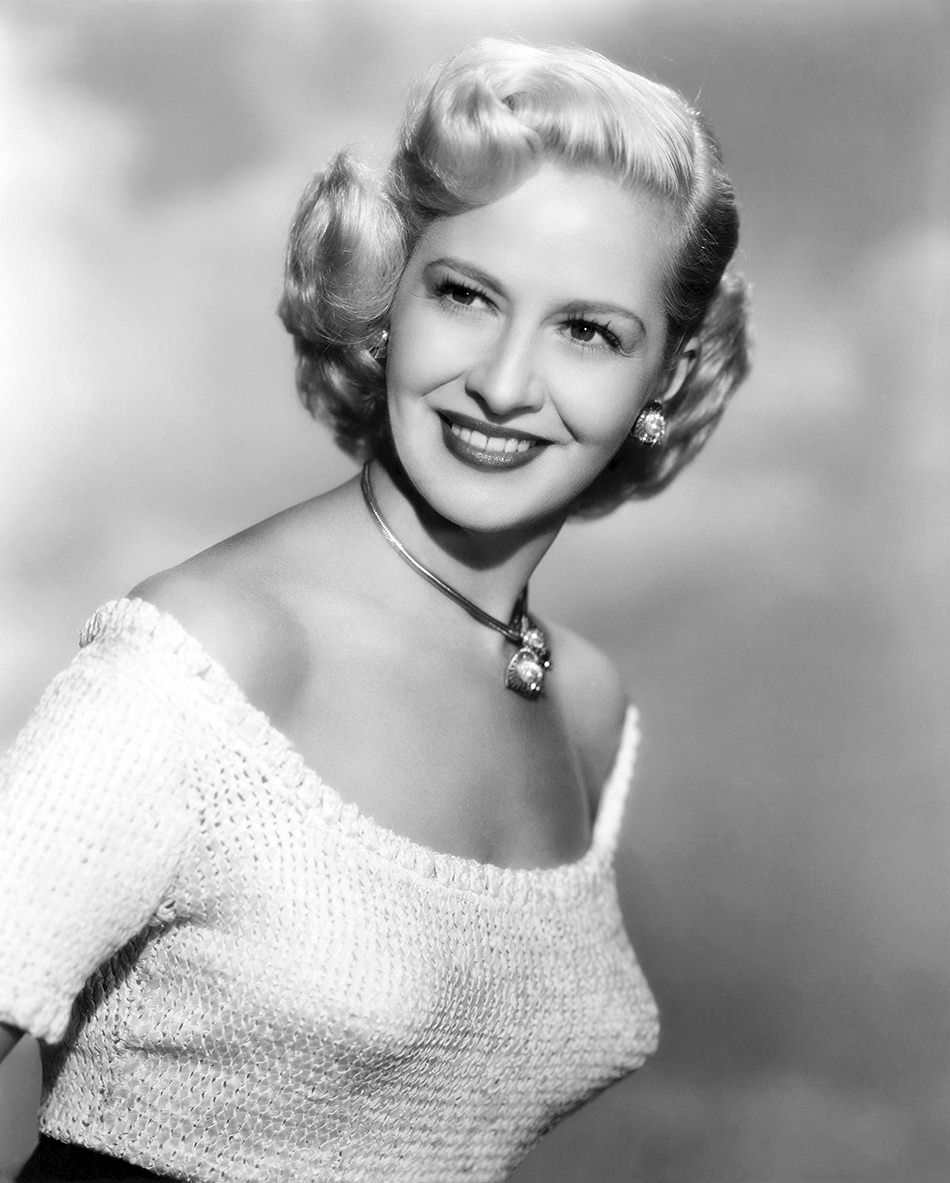 She was "the other Marilyn".

Making comparisons between Marilyn Maxwell and Marilyn Monroe is not hard to do. Both made their screen reputations as beautiful blondes. They both had lovely figures and were typecast in "dumb blonde" roles. Both Marilyn’s were targeted by powerful men in Hollywood to be used and abused. However similar their lives and careers may have appeared, comparing them too closely does a disservice to both. 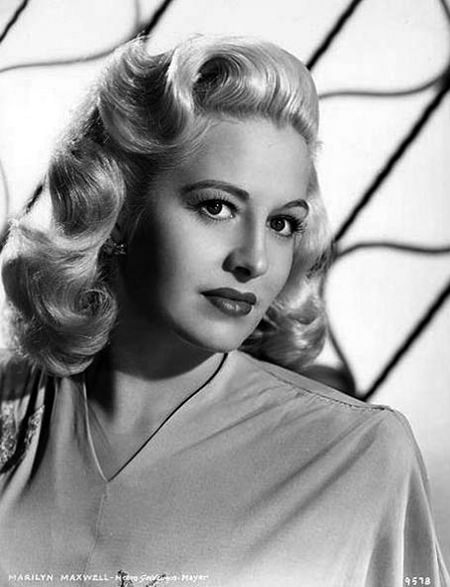 Another important similarity is the influence their mothers had on putting them on the paths they found through life. In the case of Norma Jean Baker, her mother was hardly fit to be one, leaving the future Marilyn in foster care and eventually a ward of the state. When Anne Maxwell’s second child was born a girl on August 3, 1922, in Clarinda, Iowa, she was filled with dreams and ambitions that her little girl would grow up to be a star, so she gave her a marquee-ready name, Marvel Marilyn Maxwell. Since she was going to be the mother of an important and glamorous star, she soon became bored with her insurance salesman husband and left him when little Marvel was five.

Anne took her kids on the road with her as she traveled the country as an accompanist for Ruth St. Denis, a pioneer of modern dance. Marvel’s life revolved around singing and dancing lessons, and when she wasn’t on the road with her mother, she was on stage at the local Kiwanis Club or the Elks Lodge. When her brother began managing a local radio station, he hired Marvel to sing on the air. Local band-leaders heard her on the air, and she was hired by a progression of bigger acts until she joined up with the Harry Weems Orchestra in 1939 and was heard on To Beat the Band. Weems had enough confidence in her that he paid her tuition to study at the Pasadena Playhouse with an eye towards going into pictures. He told her he knew she would get a big studio contract and pay him back.

She left the Playhouse after a failed screen test with Paramount in 1942, and she went on a six-month camp tour with the USO. When she got home she was greeted by a contract MGM. The studio set about giving her "the glamour treatment"; straightening her teeth, dying her blonde locks red and then a more alluring blond, and dressing her in the finest gowns. They also told her that Marvel would not work as a star’s name (even though that is why Anne Maxwell chose it) so she began going by her middle name.

At first the studio assigned her to a series of bit parts, and eventually she was featured in Salute to the Marines (1943), but audiences began to take notice when she became Van Johnson’s love interest in the Dr. Gillespie series. Johnson’s character was a bit of a wolf, but he had to be on his toes to get away from Maxwell’s doctor-hungry character. Van and Marilyn made an attractive couple on screen, but even though they were in three Gillespie pictures together, the publicity department did little to play it up. The feeling was that Marilyn had obviously "been around". 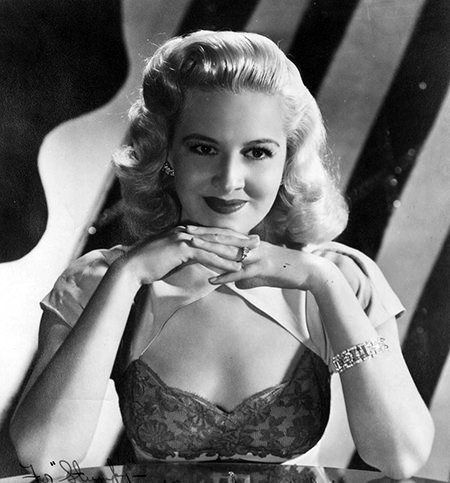 Marilyn met her first husband, actor John Conte while filming  Lost in a Harem (1944).  Her one song in the picture, "What Does It Take to Get You?" had the line: "I can even get as far as second base with Frank Sinatra, too…" Conte and Maxwell were married after finishing Harem in 1944 and were divorced in 1946.

After the divorce, Marilyn began to attract the attention of many of Hollywood’s most eligible heart-throbs, but she gave her heart to Frank Sinatra. There were rumors that the affair was serious enough the Ol’ Blue Eyes considered divorcing Nancy for her. The fling came to an end when Frank bought Marilyn a diamond bracelet. Nancy discovered the bauble and though Frank was going to surprise her with it. When she saw Marilyn wearing it at a New Year’s Eve party at the Sinatra home, Mrs. Sinatra hit the roof. Frank had a big fight with his second wife, Ava Gardner, over Maxwell as well, be she later admitted to overreacting.

Marilyn became a regular on Kraft Music Hall with Bing Crosby during the 1944 season. MGM had trouble finding good parts for Maxwell as the War came to a close, mostly because the studio "didn’t need her". All the good roles went to Lana Turner or any number of other starlets. Maxwell did her part for the War effort by working extensively with the USO, and she was very popular with the troops.

In 1946, Marilyn left MGM. Without studio ties, she was able to join the nightclub circuit and do more radio work. She traveled to London to perform at the Palladium with Jack Benny’s company in 1948, and became good friends with Jack’s daughter, Joan, who later wrote "We became good friends during that trip and she would often come to my room to chat … I enjoyed knowing Max for that short time. She was a neat lady." 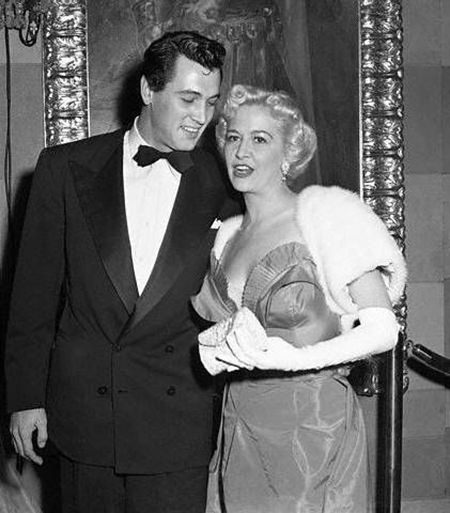 Marilyn married restaurant owner Andy MacIntyre in 1950, but the marriage seemed doomed from the start. Mac was a drinker and allegedly abusive, but the real trouble came when Maxwell went to Korea in June 1950 to entertain the troops. Maxwell and MacIntyre divorced in 1951.

Marilyn had known Bob Hope for some time, but they apparently had not had a relationship until the Korean tour. Soon after returning to the States, they went to work together on The Lemon Drop Kid (1951). There was nice on-screen chemistry between Maxwell and Hope, and the high point of the film came when they introduced the Christmas classic, "Silver Bells", in a duet.

Bob and Marilyn were said to be inseparable, and people around the studio began referring to Maxwell as "Mrs. Bob Hope". Bob’s secretary said that Hope asked Marilyn to marry during a trip to Ireland, but she turned him down because she knew that Dolores would never grant a divorce. Although they were very close, Bob was unable to do much for Marilyn’s fading movie career.

Marilyn married producer Jerry Davis in 1954, and she had a son, Matthew, in 1956. Although the marriage was not as rocky as her first two, she and Jerry divorced in 1960. During the sixties, she was often seen on the arm of Rock Hudson. Fan magazines had been quick to list her as being "just friends" when they showed her out with her past affairs, but there was much more truth to the situation with Hudson. Maxwell often went out with Rock to help disguise her dear friend’s homosexuality.

This collection includes all known appearances by Marilyn Maxwell.