One of the most handsome men in Hollywood and he was a leading in romantic comedies.

Choose your CD format
or order disks individually: Add to Cart Add to wishlist
Play a sample episode from January 11, 1954:

"Has Anybody Seen My Gal?" 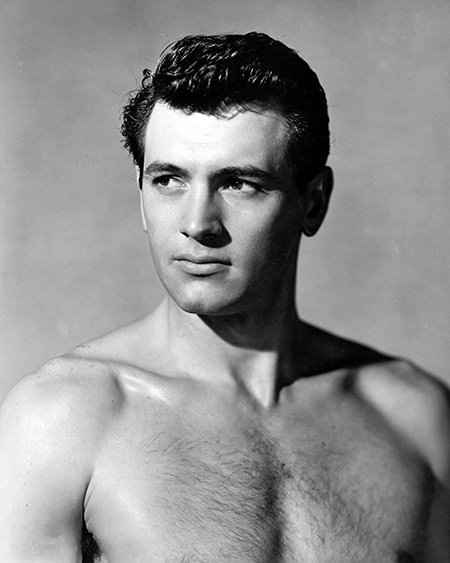 Critics scoff when the Hollywood machine promotes a starlet who has a pretty face and an attractive figure but little in the way of talent. The machine may put the starlet through a training series of singing, dancing and acting lessons in hope of recouping the Studio's investment in the starlet, and she may or may not become a full blown Star. Later, Hollywood will react with feigned horror when the same starlet finds her name attached to scandal.

It is less obvious that the Hollywood machine goes through a very similar process with its He-man leading men, but it does seem to be better about keeping the scandals under the rug for them.

Winnetka, Illinois, telephone operator Katherine Wood had a son with auto mechanic Roy Sherer in 1925. Roy abandoned Katherine and Roy Jr. during the depths of the Great Depression. Katherine remarried to Wally Fitzgerald who adopted Roy Jr. and gave him his surname. Roy was a shy, rather unremarkable boy who delivered newspapers, ran errands, and caddied at the local golf course. He was in the Glee club at New Trier High School, and tried out for school plays but had difficulty remembering his lines.

Since he was still in high school when WWII began, Roy joined the Navy after graduation and was shipped to the Philippines as an airplane mechanic after graduating from Great Lakes Naval Training Center. After mustering out in 1946, he moved to Los Angeles and applied for the Dramatics program at USC, but was dropped because of poor grades. He took work as a piano mover, truck driver, and vacuum cleaner salesman, but he still wanted to get into movies. There is a story that he bought a tan gabardine suit and began parking his truck outside the studio gates, hoping to be discovered. 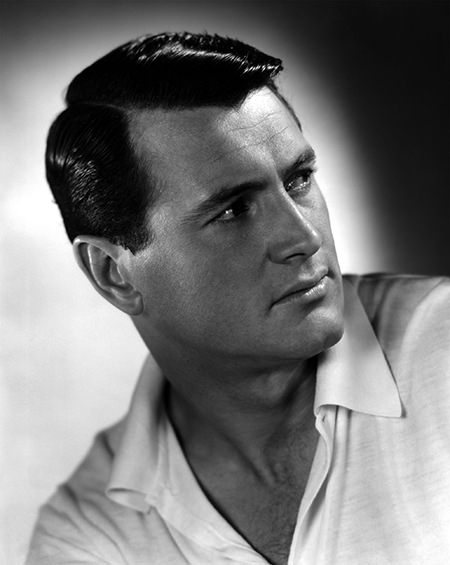 Talent scout Henry Wilson like Roy's photos, was willing to take a chance, and gave him the new name Rock Hudson (a name he later admitted to hating). Rock's film debut was a small part in "Fighter Squadron" (1948), and it took 38 takes before he could get his only line right. He began an apprenticeship at Universal International where he was trained in acting, fencing, singing, dancing and horsemanship. In 1954, he was cast with Jane Wyman in the remake of "Magnificent Obsession." He became a full blown Star when he was nominated for an "Academy Award for Giant" (1956), which he starred with James Dean and Elizabeth Taylor.

Rock began the 1960's in a series of romantic comedies, beginning with "Pillow Talk" (1959) with Tony Randall and Doris Day. Toward the end of the decade, he made the shift to action thrillers with "Tobruk" (1967) and "Ice Station Zebra" (1968). In the '70's he came to the small screen opposite Susan Saint James in McMillan and Wife. Years of heavy drinking and smoking caught up with Hudson when he experienced a heart attack in 1981, and he underwent quintuple heart bypass surgery.

It was an open secret in Hollywood that Rock Hudson was homosexual. His 1955 marriage to Phyllis Gates came after Confidential Magazine threatened to publish an expose' on Hudson's sexual preferences. Gates was the secretary of Hudson's agent. The marriage broke up three years later when she confronted him about his sexuality (there are rumors in the LGBT community that Phyllis Gates was, in fact, a lesbian and knew of Rock's habits all along). Co-stars Elizabeth Taylor and Susan Saint James claimed to know Rock's "secret" but remained discreet.

A Star on the Hollywood Walk of Fame at 6116 Hollywood Blvd honors Rock Hudson's contributions to Motion Pictures.