Few weapons on the battlefield inspire as much terror than a machine gun, but that is nothing compared to the terror they inspire in the hands of criminals.

Since the beginning of Industrialized Warfare, few weapons have instilled as much fear in a soldier's heart than the machine gun. Conversely, it is hard to imagine an infantry commander complaining that his troops have too many machine guns. On the battlefields of the Great War, more combatants would be killed by artillery fire, but machine gun fire is much more demoralizing because it is both an undiscriminating killer as well as one which must be aimed by its operator to be effective. 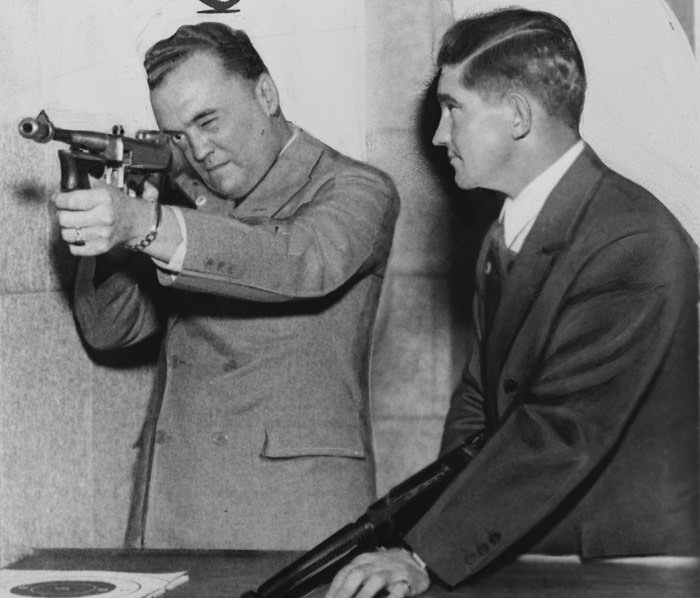 The earliest firearms used in warfare were muzzle-loading muskets and later, rifles, before the weapon can be fired, a propellant charge and projectile bullet must be loaded from the front of the weapon. Near the end of the American Civil War, troops began to be issued metallic cartridge, breech loading rifles, the round consisting of a metal tube holding the propellant and the bullet could be swiftly loaded into the back of the weapon and then fired. Repeating weapons were also developed during the Civil War, including pistol revolvers and lever-action rifles. As the nineteenth century came to a close, most armies adopted bolt action battle rifles, which could not be fired as rapidly as the lever-action rifles preferred in the American West but were more robust, accurate, and cheaper to produce.

Still, a bolt action rifle required the soldier to manually cycle the weapon's action between shots. Awards would be given for proficiency at rapid-fire, being able to place aimed shots on target in a short period of time, but the self-loading rifle would be a major advance in the lethality of an individual soldier. Self-loaders and so-called automatic pistols fire a round when the trigger is pulled, the action is cycled either by the force of recoil or by gas pressure from the fired round, loading another cartridge which can be fired after the trigger is released and pulled again. As complicated as it is to describe, it usually happens in the blink of an eye.

A fully automatic weapon, or machine gun, is one where pulling the trigger fires the first round which, in turn, provides the power to cycle the action to fire the next until the trigger is released there are no more rounds to fire. A truly proficient machine gunner learns to fire in short bursts to conserve his ammunition and control the point of impact. The "Spray and Pray" technique popularized in the movies is rarely effective and can be as dangerous to the gunner as his target.

Machine guns are generally classified by size. Crew served or vehicle-mounted machine guns are large and complex enough that the gunner cannot effectively operate the weapon by himself. On smaller crew-served weapons used to support infantry, the gunner is often the largest soldier in the squad to be able to carry the heavy weapon and his assistants (A-gunners) chiefly carry extra ammunition. So-called assault rifles may have a selective fire option between automatic and semiautomatic fire, but infantry doctrine discourages automatic fire because it requires more heavy ammunition to be carried by the individual soldiers. Sporterized assault rifles which cannot be selected for automatic fire are popular in the civilian firearms marketplace.

The term submachine gun refers to small, usually pistol-caliber automatic weapons. Their low powered, light-weight ammunition allows their design to achieve phenomenal rates of fire, often 600 to more than 1,000 rounds per minute. One of the first submachine guns was the Thompson submachine gun or Tommy Gun. Developed toward the end of the Great War, the Tommy Gun was notoriously popular with gangsters and law enforcement, although not as widely used as the movies depict. Despite its popularity, the Thompson has always been an expensive weapon to purchase.

Machine gun ownership is legal in the United States, although the National Firearms Act of 1934 placed severe restrictions on ownership of an entire class of firearms (including automatic weapons, sawed-off shotguns, and silenced or suppressed firearms). The Act requires registration with the Bureau of Alcohol, Firearms, and Tobacco (ATF) and places a heavy tax on the weapons.

Speed Gibson of the International Secret Police, 1937, Radio Attractions Syndication. Speed and the ISP agents are in Tibet and have plans in place to arrest the Octopus after Barney flies into Black Pass to pick up prisoners. The Octopus sends another plane to machine gun Barney's plane. Suffering Wangdoodles!

Columbia Workshop, April 10, 1939, CBS, "They Fly Through the Air with the Greatest of Ease". Originally broadcast as part of "Words without Music". The piece is an indictment of airmen who rain destruction on civilians and refugees with their bombs and machine guns. Written by Norman Corwin.

Captain Midnight, February 22, 1943, Blue Network, "The Challenge of the Crossed Swords". Captain Midnight and his people are working with Yugoslavian guerillas who defend an airfield from Nazi paratroopers with machine guns. Notes from Your Soldier's Notebook, March 3, 1943, Sixth Service Command Syndication. Telling of the heroism of SSgt Jesse R. Goley of the "America" Division fighting in the Pacific. After pulling three of his injured men out of the line of fire from an enemy pillbox, SSgt Goley uses a tracer-filled submachine gun to direct the fire of a light tank. Goley continued firing even after he had been struck in the chest and left eye. For his action, he was awarded the Congressional Medal of Honor.

Terry and the Pirates, October 21, 1944, Blue Network. The pontoon plane takes Burma and an injured Flip to the hospital, leaving Terry and Pat on a leaky riverboat. A Japanese scout plane spots them and sends a patrol up the river. Our heroes have a machine gun but are low on ammo.

The Adventures of Sam Spade, Detective, January 25, 1948, CBS, "The Gold Key Caper". Murder, mayhem, machine guns, and half a million dollars are the keys to this exciting case. A pretty girl gives Spade a key to her apartment, but when he gets there, he finds an ex-con with a switchblade knife. The small-time crook is soon replaced by a gangster with a Tommy gun in a violin case. 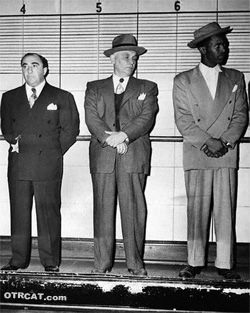 The FBI in Peace and War, December 28, 1950, CBS, "The Fixer". Fred is a three-time loser who had the bad luck to leave a witness who can positively identify him. He hires a fixer who hides him on a chicken farm. The fixer promises to get him an airtight alibi, but Fred might not be patient enough to wait.

Bold Venture, 1951, ZIV Syndication, "Mystery of the Mary K". Slate and Sailor are motoring from Miami when they come upon a lifeboat filled with bodies which have been machine-gunned. The Mary K is involved with a refugee smuggling racket, but the authorities have no idea where the ship is.

The Lineup, November 5, 1952, CBS, "The Be-Bop Bandits Bungling Bang-Bang". The cops are after bank robbers who shot up a couple of tellers with a submachine gun.

Dragnet, July 13, 1954, NBC, "The Big Rescue". A pair of robbers are terrorizing Los Angeles with a .45 Automatic and a submachine gun. They hold up the "814 Club", and Friday recognizes the M.O. from other robberies. The cops take the pistolero into custody and soon the machine gunner breaks him out with his Tommy gun.