A British actress who moved to the States after WWII to perform in some of the biggest classic films.

American audiences (and Hollywood producers) often find a soft-spot in their hearts for fragile British damsels. Perhaps the attraction stems from a manly desire to protect her, even though it often turns out that she has an internal toughness hidden just below the surface. 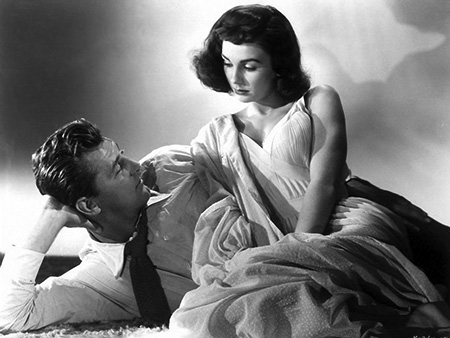 During the 1912 Olympic Games in Stockholm, Charles Simmons was part of the British gymnastics team who brought home the Bronze medal. After the Games, he married Winifred Loveland and together they had four children, the youngest a pretty girl named Jean, born in 1929.

During the Second War, the family was evacuated to Winscombe, Somerset, where Charles was called upon to teach physical education at the local school and Jean was called with her sister to go on the village stage to perform such standards as “Daddy Won’t Buy Me a Bow Wow”. This is when Jean Simmons discovered a talent and love for performing.

When the family returned to London, Jean was enrolled in the Aida Foster School of Dance where she was spotted by director Val Guest, who cast the fourteen-year-old in the comedy Give Us the Moon (1944). She was signed by the Rank Organization and soon found herself in more important roles as British cinema went into a post-War boom, including Caesar and Cleopatra (1945), Great Expectations (1946) and as a sultry native beauty in Black Narcissus (1947). On the strength of her performance in Great Expectations, Laurence Olivier cast her as Ophelia in his production of Hamlet (1948). When Olivier made the offer, Jean admitted that she had not even read the play, but Olivier made arrangements for her to be tutored and receive acting lessons. The result was strong reviews and an Oscar nomination for Jean. Probably the only one not enthused about Jean’s performance was Olivier’s wife, Vivien Leigh, who had hoped to play the part herself (at thirty-three, Vivien was probably the only one who didn’t feel she was too far past her prime to play the fragile Ophelia). 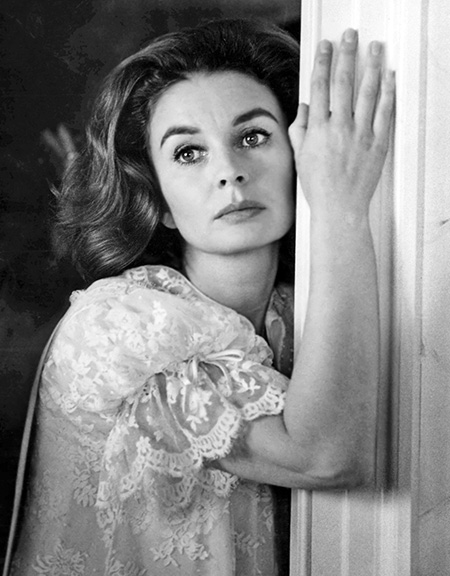 Jean was cast with British swashbuckler star Stewart Granger in Adam and Evelyn (1949), which was fine with both stars since they were already romantically involved despite their age difference (Granger was 15 years older than Jean). J. Arthur Rank did his best to keep the romance secret, believing that Granger was still married (he was not). The couple was married at an Arizona ranch in 1950, and Howard Hughes, who bought RKO Studios in 1948, bought Jean’s contract from Rank with the intention of turning her into the toast of Hollywood. Hughes was notoriously interested in starlets for other reasons, and Jean was no exception. When Hughes called Jean at home to make his intentions clear, Granger overheard the conversation and snatched the receiver from his wife’s hand, shouting “Mr. Howard Bloody Hughes, you’ll be sorry if you don’t leave my wife alone!”

Hughes took his revenge by refusing to loan Jean to director William Wyler who wanted to use her for Roman Holiday (1951) in the role which brought Audrey Hepburn the Oscar and cement her status as an A-list star. Obligated to do four pictures for Hughes and RKO (even though she had not signed the offered seven-year contract), Simmons’ first American film was the “sand and sandals” epic Androcles and the Lion (1952) with Victor Mature. While filming the noir classic Angel Face (1952), Hughes told his director, Otto Preminger, to spare her no quarter, including a scene where Robert Mitchum was to slap her violently. After several bruising takes, Mitchum turned to the notoriously difficult director, gave him a solid whack, then calmly asked if he wanted another take. Preminger was satisfied at that point.

Granger and Simmons finally sued to get Jean out of the contract with Howard Hughes in 1952, and the matter was settled out of court. Jean never signed another studio contract. She appeared in a series of costume dramas, including The Robe (1953), Young Bess (1953), The Egyptian (1954), and Spartacus (1960). She took a professional risk in the musical Guys and Dolls (1955). Not only was she appearing with some of the most powerful names in show business, Frank Sinatra and Marlon Brando, but she chose to do her own singing.

The only thing to top the reviews from Guys and Dolls would have been the birth of her daughter, Tracy Granger (so named for her friendship with Spencer Tracy). Her marriage to Granger was becoming shaky at that point, however. Since they were often working on different projects, their home life suffered, but when they had an opportunity to work together on William Wyler’s Ben Hur (1959) Granger vetoed the idea. They divorced in 1960 and Jean married director Richard Brooks. Although both of her husbands were significantly older than she, Jean denied that she was seeking a father figure, “The were really nothing like my father at all. My father was a gentle, soft-spoken man. My husbands were much noisier and much more opinionated.” Her second daughter, Kate Brooks, was born in 1961 (named for her friend Katherine Hepburn).

Brooks wrote and directed The Happy Ending (1969) for his wife, and Jean was nominated for both an Oscar and a Golden Globe for her performance. She and Brooks divorced in 1980 but remained friends until his death in 1992. Jean’s career had a resurgence in the TV mini-series The Thornbirds (1983) and North and South (1985). Jean Simmons succumbed to lung cancer at her home in Santa Monica, California, just nine days before her 81st birthday.