Fun at Breakfast with Howard and Sheldon

Sponsored by Mennen toiletries company, duo Tom Howard and George Shelton from It Pays To Be Ignorant host this zany morning program.

Choose your CD format
or order disks individually: Add to Cart Add to wishlist
Play a sample episode from August 11, 1946:

Morning in the typical American home. The man rises from his bed, stumbles groggily into the toilet, shaves his craggy face, makes his way into breakfast, and then launches himself out the door to face a hard and sometimes cruel world. Rather a bleak and unsettling picture. What the man needs is something to put a smile on his face before he goes out the door. What he needs is some Fun at Breakfast.

A few good laughs with your morning corn flakes can be as bracing as a few splashes of Skin Bracer after shave, at least that seems to be the thought behind Mennen's sponsorship of Fun At Breakfast with Tom Howard and George Shelton.

Howard and Shelton will be recognized by quiz show fans as two of the questionable geniuses behind It Pays To Be Ignorant. The two maniacs in question worked together in Vaudeville, and carried their comic chemistry on the airwaves. 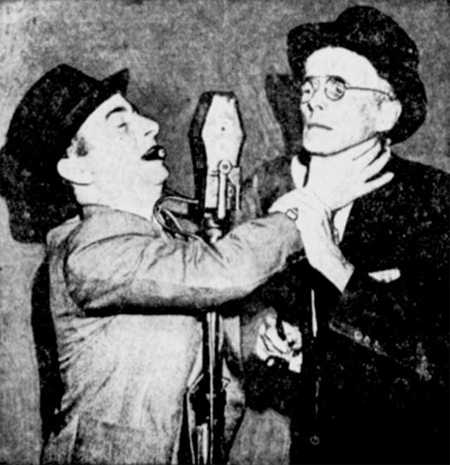 The Mennen Company put together a series of five-minute spots featuring the antics of Tom Howard and George Shelton for syndication. The show features several renditions of the Mennen Shaving Cream jingle, but the real reason to take your attention away from your toast and coffee is Howard and Shelton. Howard was born in Ireland and grew up in Philadelphia. He decided in 1905 that $15 a day working in vaudeville was much more appealing than working in a grocery store, and he started out doing a dozen 'turns' a day in a local theater. He eventually made his way to Broadway and appeared in the Ziegfeld Follies and other revues. Shelton grew up in New York's Bowery but broke into vaudeville in Iowa tent shows. He joined the Army and served in France during WWI. When he returned to the States, he broke into Broadway and eventually teamed with Howard in a "straight-man and ignoramus" act.

In addition to Fun at Breakfast, Howard and Shelton were joined by Lulu McConnell and Harry McNaughton on one of the silliest programs in OTR, It Pays to Be Ignorant.

The Mennen toiletries company formed in 1878 when German immigrant Gerhard H. Mennan had an idea for a talcum based powder.

The line expanded over the years to include over the counter pharmaceuticals, beauty and shaving products. The three note jingle and slogan which would later end all of the company's TV commercials ("By Mennen") is considered one of the most effective in all of advertising.

In the post WWII era, Mennen was appealing to the stubbly cheek crowd with a longer, catchier jingle: "Keep presentable longer, Use Mennen shaving cream". The five-minute syndicated programs where probably as long as they could be without listeners shooting coffee out of their nose from laughing so hard.