Breakfast in The Blue Ridge

Hosted by Lulu Belle and Scotty Greene, the duo was known as the "hillbilly George & Gracie" and enjoyed a long career together. 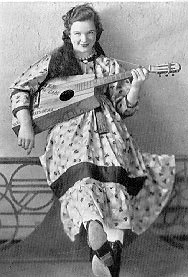 Regulars on Grand Ole Opry, Lulu Belle (born Myrtle Eleanor Cooper) and Scotty Greene  Wiseman married December 13, 1934. Together they were known as the "Sweethearts of Country Music" enjoyed enormous success in the country music scene until their retirement in 1958.

Myrtle Eleanor Cooper was the daughter of moonshiners, her family relocated from North Carolina to Chicago to make big money in the big city. After the 1929 Stock Market Crash, her father looked for more ways to make money and brought his daughter to the station that broadcast National Barn Dance. She won over producers and was renamed Lulu Belle and had an act opposite Red Foley as a lovesick girl. Her goofy and lovable onstage persona won the hearts of millions. Even during the heart of the Depression, her shows were sold out.

When Red Foley married, she found a new partner, the shy Scott Wiseman. The duo made the transition from radio to film appearing on screen in such movies as Shine on Harvest Moon (1938), County Fair (1941) and The National Barn Dance (1944). They co-wrote the country music ballad "Have I Told You Lately That I Love You?" The also co-wrote a song called "Mountain Dew" that inspired the popular soda. Wisecracking and loveable,  Lulu Belle was the heart of Breakfast of Blue Ridge old time radio show. She was voted "Favorite Female Radio Star" by fans of Radio Guide magazine in 1938.

After their retirement in entertainment, Scott Greene Wiseman became a teacher but Lulu Belle had bigger aspirations. She served two terms in the North Carolina House of Representatives.