Choose your CD format
or order disks individually: Add to Cart Add to wishlist
Play a sample episode from May 15, 1948: 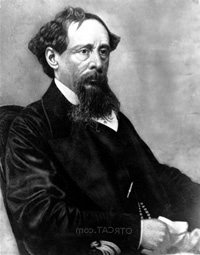 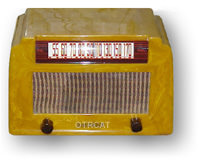 Favorite Story brought classic literature to the radio.  Favorite Story originally began its broadcast on KFI Los Angeles and made the leap to nationally broadcast.

Favorite Story was hosted by Ronald Colman with frequent guest stars such as Hans Conreid, William Conrad, Raymond Burr, and Helen Craig.   This old time radio series high quality and use of timeless literature lead to its rebroadcast for years to come.

Fishing tackle manufacturers often equip their lures with what are known as treble hooks. With three sharp points on each hook, the treble hook was more likely to hold onto any fish curious enough to try a taste of the lure. ZIV Syndications used a 'triple hook' approach to sell the Favorite Story program to smaller-market broadcasters. The first hook was the stories themselves, which were taken from short stories, novels, and literary classics. Next was the fact that each week's story came with a celebrity hook; the producers asked all sorts of celebrities, film and radio stars, directors, musicians, sports figures to recommend their favorite story from a list provided. Finally, the sharpest hook of the bunch was the program's host, film and radio star Ronald Colman.

The hooks were designed to snare the attention of non-network affiliated broadcasters, but as with a fishing lure, they were not all they appeared. As good as the scripts were, adapting a great novel to a half-hour format can be less than satisfying. The celebrity (whose favorite the story was) did not appear on the program, rather, they had been sent a list of stories to choose from and their name would be read on the air. Each episode cost ZIV about $9,000 to produce, which included Colman's $3,000/episode fee. Colman was even able to negotiate his contract so that he was paid each week whether he recorded or not, thereby allowing him to continue his film career uninterrupted. 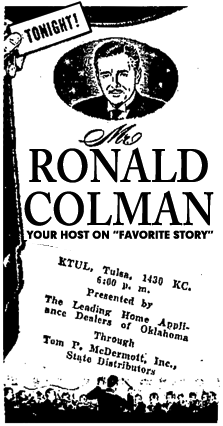 Transcriptions were nothing new to radio, but early transcribed programs simply could not match the quality of a live program from one of the networks. A network show was performed live in the studio, then transmitted over AT&T telephone wires to the local broadcaster to go over the air. As cumbersome as this system seems, audio recording technology at the time simply could not provide the fidelity for a good radio broadcast. However, recording technology was beginning to challenge the network's dominance after the War, and the networks began to worry about transcriptions.

Frederic W. Ziv earned a Law Doctorate from the University of Michigan but rather than hanging his lawyer's shingle, he opened an advertising agency in Cincinnati. Due to its relatively central location and the wide coverage of Station WLW, Cincinnati was becoming a hotbed of radio content production. Realizing that smaller stations that did not enjoy network affiliation could not afford to produce the higher quality programming on demand, Ziv got into the transcription business in 1937.

Fred Ziv made it a point to let people know that he did not invent transcription, but he did develop the concept. The ZIV Company took advantage of advancements in recording technology and was known for paying for the highest production values and recognizable Hollywood talent (although the company was willing to cut corners on many other costs).

Key to ZIV's business model was the notion that every transcribed show could be sold several times. First, ZIV's sales representatives would hit the independent broadcasters in large markets which were competing directly with the networks. After a syndicated program ran for a while in these markets, it could be resold to a station in a smaller town in the region on the assumption that the smaller station's listeners had not heard the show previously. A small market station might pay as little as $12 per episode, but by this time, every penny went directly to ZIV's bottom line.

Bringing Ronald Colman into the ZIV organization was not a simple feat. Negotiations went on for more than six months, and in addition to his high fee, Colman was also entitled to a percentage of the show's sales. Understandably, Ziv was greatly relieved when Favorite Story became an immediate hit. Bringing Colman into the stable made it easier for ZIV to attract more big-name Stars like Dana Andrews, Irene Dunne, Fred MacMurray, Adolphe Menjou, and Bogey and Bacall.

ZIV got more than their money's worth from Ronald Colman. Although the flexible recording schedule had been baked into his contract, when he was in the studio Colman gave his all to the performance. Not only did he perform the hosting duties he was hired for, on occasion he would narrate a story or even act on the show. Although he and his wife, Benita, had made popular guest appearances on The Jack Benny Program, we can assume that the positive experience of Favorite Story helped to convince the Colman's to embark on The Halls of Ivy in 1950.