After starting in a vocal quartet with his brothers, Andy Williams became one of the most successful vocalists in show business.

When we consider crooners in pop music, the first thing we notice is their technique of combining their vocal talents with electronic amplification to create the illusion of a personal connection between the singer and the audience. It can even work without electronics, for many bobby soxers the highlight of the show was catching a glimpse of Rudy Vallee's lips moving through his trademark megaphone. 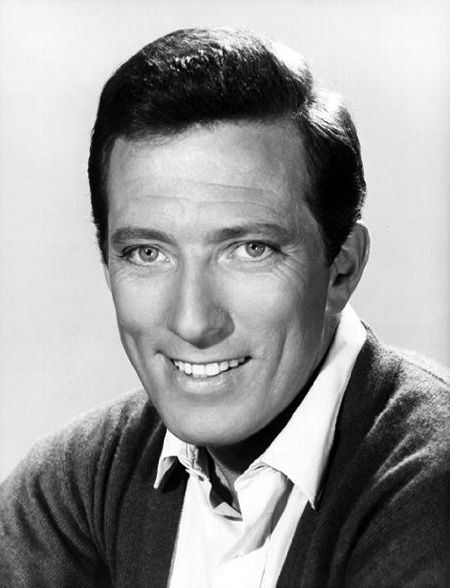 Even more important than the electronics is the crooner's ability to find the right song and make it their own. The singer may have no real connection with the number, and even though recordings have been sold in the millions, every fan knows in her heart that when she hears it, the singer is singing for her and her alone. The classic example is der Bingle. No matter who records "Don't Fence Me In", "Pennies from Heaven", or "White Christmas", the result is always a Bing Crosby song.

One of the best-sold songs of all time is "Moon River". The highly recognizable tune was used as a theme in the Henry Mancini scored Breakfast at Tiffany's (1961) and we hear Johnny Mercer's romantic lyrics for the first time when Audrey Hepburn strums her guitar and sings them sitting on a fire-escape landing. Hollywood legend states that a studio exec didn't like the song and wanted it cut from the film but Hepburn stated that would occur "over my dead body" (by many accounts, her language was much more colorful). The song won the Academy Award for Best Original Song and was sung by Andy Williams at the Oscar Ceremony. Although he never released it as a single, Williams included it on his LP Moon River and Other Great Movie Themes (1962) and sang the first eight bars as the opening to The Andy Williams Show from 1962 to 1971.

Andy Williams was born in Wall Lake, Iowa, 1927. His performing career began with the local Presbyterian children's choir. He joined his brothers in The Williams Brothers Quartet in 1938, managed and promoted by their dad, Jay Williams. Soon, the boys were performing on WHO Des Moines, WLS Chicago, and WLW Cincinnati. In 1943, the family moved to Los Angeles and the boys began their recording and film career. MGM featured the Williams boys in Janie (1944), Kansas City Kitty (1944), and Something in the Air (1947). They were featured on Bing Crosby's recording of "Swinging on a Star" (1944). The group broke up temporarily when oldest brother Bob was drafted. After he was released, MGM's choral director and lead vocal arranger, Kay Thompson, hired the boys for Good News (1947).

Thompson had a successful career in radio before signing with MGM in 1943, but by the end of the decade, she became disenchanted with working behind the scenes. After completing work on The Pirate (1948) with Judy Garland and Gene Kelly, Kay decided to hit the road, and she took The Williams Brothers Quartet with her. The Kay Thompson and the Williams Brothers nightclub act debuted in Las Vegas and was soon the highest paid nightclub act in the world. While on tour, Andy and Kay developed a "June-December" romance (he was 19 and she was 38). Although the romance was short-lived, Williams and Thompson remained on friendly terms and she mentored him in his solo career after The Williams Brothers Quartet broke up in the summer of 1953. 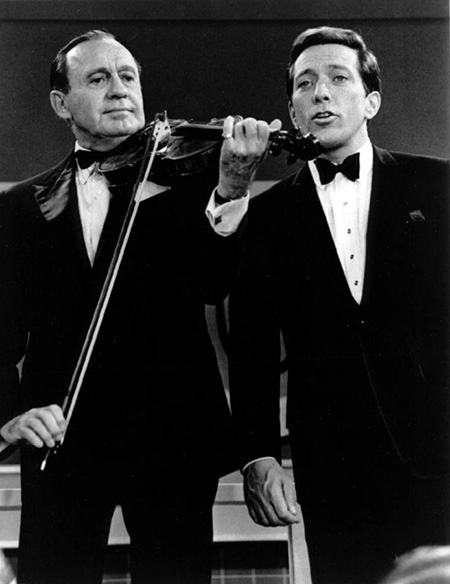 Andy began his solo career by cutting six sides for RCA Victor in 1953, but none of them were popular. He won a regular spot on Tonight Starring Steve Allen (1954 season, forerunner of The Tonight Show with Jack Paar and Johnny Carson) and signed with Archie Bleyer's Cadence Records. He began hitting the charts with tunes like "Canadian Sunset", "Butterfly", "The Hawaiian Wedding Song", and "I Like Your Kind Of Love" before moving to Columbia in 1961. Bleyer hated Williams' version of "Moon River" and did not want to release it because it would not appeal to a teenage audience. Williams wound up owning all of the Cadence master tapes in 1964 and occasionally licensed them to Columbia, including material from the Everly Brothers, Lenny Welch, and The Chordettes. He eventually formed a separate company to handle the material, Barnaby Records. (In 1970, Barnaby Records released the first album by a new singer named Jimmy Buffett, Down to Earth.)

Primarily an album artist, Andy Williams became one of the most popular artists in the country during the sixties and seventies. By 1973, he had as many as 18 gold albums and was thought to have more gold albums than any other artist with the exceptions of Elvis, Sinatra, and Johnny Mathis. When Caesars Palace opened in Las Vegas on August 5, 1966, Williams was the star of the stage production "Rome Swings". The show was a sell-out and Williams headlined Caesars for the next two decades.

In 1991, brother Don invited Andy to visit the town of Branson, Missouri, in the Ozarks. Don was the manager for entertainer Ray Stevens (who had recorded the novelty hits "The Streak" and "Everything is Beautiful" for Barnaby Records in the seventies). Stevens had just opened a theater in Branson, and a year later Williams opened the Moon River Theater. His was the first non-Country act in Branson.

During an appearance in Branson in 2011, Williams announced that he had been diagnosed with bladder cancer. He died at the age of 84 on September 25, 2012. His ashes were spread over an artificial waterway on the grounds of the Moon River Theater.

A Star on the Hollywood Walk of Fame at 6667 Hollywood Blvd honors Andy Williams contributions to the Recording Arts. There are sixteen honorees with the name Williams on the Walk, making it the most common surname.