A Summer Replacement Funny Man for Jack Benny in 1947! 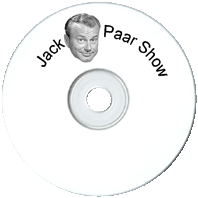 Choose your CD format
or order disks individually: Add to Cart Add to wishlist
Play a sample episode from August 17, 1947:

Hand-picked and promoted by Jack Benny, The Jack Paar Show was created as a summer replacement for Jack Benny in 1947. Paar was discovered by Benny in 1945 while entertaining the troops in the Pacific. Benny produced Paar's show himself, and gave him a good start by guest-starring Paar on his last show of the season before Paar's own show kicked off.

Unfortunately, Paar's radio career was brief. He believed in the type of comedy that Jack Benny and Fred Allen did, not the newly-popular gimmicky-type comedy, and this didn't go over well with his sponsor, Lucky Strikes. However, he went on to have great success as the host of The Tonight Show in the 1950s and 1960s, helping Carol Burnett, Liza Minelli, and Woody Allen start their careers. Paar became such a success that he has been called one of the most imitated personalities in broadcasting.

This collection includes the Jack Paar Show, his career launch on Jack Benny's program on May 25, 1947, and a few guest appearances on other shows such as Tales of the Texas Rangers and Stars Over Hollywood.