British born journalist, his observations of American life and culture were beloved by millions.

Choose your CD format
or order disks individually: Add to Cart Add to wishlist
Play a sample episode from April 12, 1945:

Alistair Cooke was born in Salford, Lancashire, 1908. His father, Samuel, was a metalsmith and Methodist lay preacher and his mother, Mary Elizabeth, was of Irish Protestant extraction. During the Great War, the youngster became a sort of mascot for a group of American soldiers who were billeted in the Cooke home. He eventually won a scholarship to Jesus College at Cambridge, where he achieved honors in English and became heavily involved in the artistic community. He edited the prestigious Granta literary magazine and founded the Mummers, the first theater group at Cambridge to be open to both men and women. (The Mummers gained notoriety for rejecting future Hollywood star James Mason. They advised Mason to "stick to architecture".) 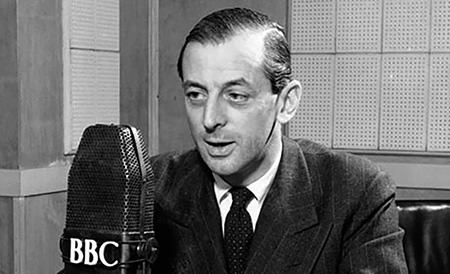 After five years at Cambridge, Cooke received a Commonwealth Scholarship and was invited to study at Yale and Harvard. While in America, he met Ruth Emerson in 1933, a grandniece of poet Ralph Waldo Emerson. Ruth and Alistair were married on August 24, 1934. Later that year, he spotted a notice that the British film critic, Oliver Baldwin, son of Prime Minister Stanley Baldwin, had been fired. Alistair sent a telegram to the network's Director of Talks to be considered for the position, and he was invited for an interview. He hopped on a Cunard liner which arrived in England 24 hours after the interview was scheduled. He was invited to write a film review on the spot and won the job.

While in London, Alistair became a correspondent for NBC and delivered a weekly 15-minute spot entitled London Letter, explaining the life of Englishmen to their colonial brethren. During the King Edward VIII Abdication crisis of 1936, Cooke estimated that he spoke 400,000 words on the subject over ten days.

Cooke returned to America in 1937 and became a citizen of the United States. He tried to sell the BBC on the concept of a London Letter in reverse called Mainly About Manhattan, but the idea was shelved in 1939 when WWII broke out. Cooke did undertake a journey through the whole United States, recording ordinary American's reactions to the War, and produced the manuscript The American Home Front: 1941-1942.

The reverse Letter from London concept was reopened in 1946, this time at the request of the British Broadcasting. Originally commissioned as a 13 installment broadcast, Letter from America would run for 58 years and have 2869 installments, heard the world over on the World Service. Cooke also became a foreign correspondent for Manchester Guardian newspaper from 1947 until 1972. CBS hired Cooke in 1952 to host Omnibus, the first network Television program dedicated to reporting on the arts. Cooke was only yards away 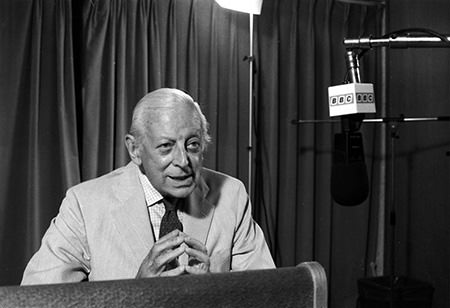 from Presidential hopeful Robert Kennedy when he walked through the kitchen of the Ambassador Hotel in Los Angeles on the night of June 5, 1968. He witnessed and reported the events as shots rang out and Bobby Kennedy was assassinated by Sirhan Sirhan.

PBS began a showcase of the best of British Television for American audiences in 1971 called Masterpiece Theatre, and Alistair hosted the series until retirement in 1992. In 1972, Cooke was awarded a KBE for his "outstanding contribution to Anglo-American mutual understanding", but he was not able to assume the title of Sir Alistair because he had renounced his British citizenship in WWII.