Humphrey Bogart was the indirect causes of one of Hollywood's great love stories. His rudeness to Audrey Hepburn drove her into the arms of co-star William Holden, but it was a romance that was doomed from the start.

Choose your CD format
or order disks individually: Add to Cart Add to wishlist
Play a sample episode from May 05, 1940: 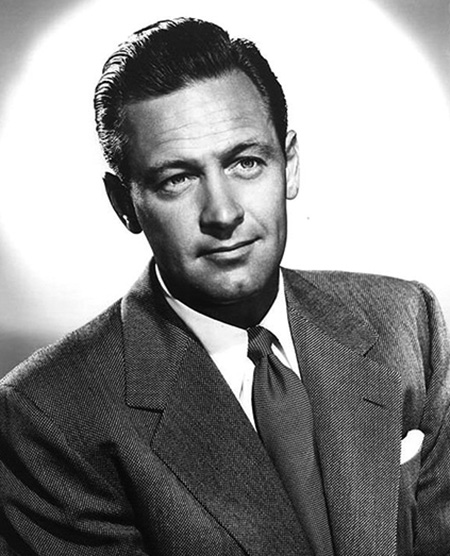 It wasn't enough for William Holden to become one of Hollywood's great heart-throbs. He was also part of one of Movieland's great love stories. Sadly, it was a love story that ended badly for everyone involved.

Born William Franklin Beedle, Jr., in O'Fallon, Illinois, 1918, Bill was the son of an industrial chemist and a school teacher. When he was three-years-old, the family moved to South Pasadena. After graduating from South Pasadena High School, Bill acted in a few local radio plays while attending Pasadena Junior College. There is an urban legend that he trained at the Pasadena Playhouse, a legend possibly started by the Playhouse's own publicity department.

There is no official version of how Holden got his professional name, although the most plausible explanation is that the studio scout who discovered him, Harry Winston, was still carrying a torch for his ex-wife, actress Gloria Holden, famous for her role as Dracula's Daughter (1936).

After a couple of uncredited appearances, Holden landed a starring role in Golden Boy (1939), opposite Barbara Stanwyck, playing a violinist who wants to make it as a boxer. After his first couple of days on the set, the producers were unsatisfied and wanted to drop Holden from the film, but Miss Stanwyck was impressed with the young actor and insisted that he be kept on. She also dedicated her personal time to mentoring the young actor. Stanwyck and Holden became lifelong friends, and according to Hollywood legend, he sent her flowers every year on the anniversary of Golden Boy's release.

He followed up with the gangster film Invisible Stripes (1939) with George Raft and Humphrey Bogart and starred in the movie version of Thornton Wilder's Our Town (1940). During the War, Holden was assigned as a 2nd Lieutenant in the Army Air Force's 1st Motion Picture Unit, acting in various training films. 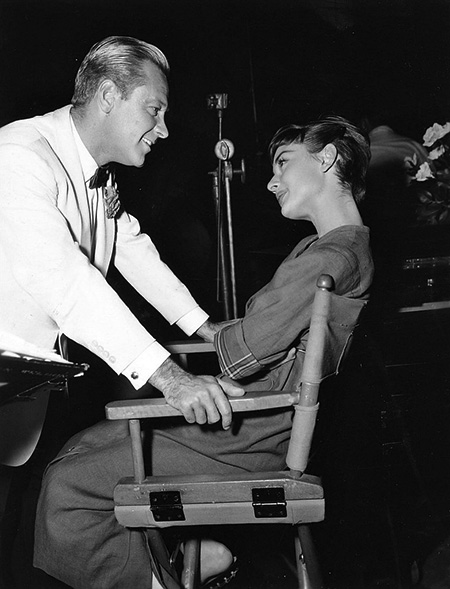 Holden's career was slow to reignite after the War until Billy wilder gave him the part of a down on his luck screenwriter who becomes the obsession of an aging silent screen siren played by Gloria Swanson in Sunset Boulevard (1950), for which he received his first Academy Award Nomination. He won Best Actor for Stalag 13 (1953), but Holden was convinced that the Award should have gone to his friend Burt Lancaster for From Here to Eternity (1953). He gave one of the shortest acceptance speeches in Oscar history, accepting his statue, saying only "Thank you", and walking off the stage.

Holden's younger brother, Robert Beedle, was a Navy flier who was killed in action over New Ireland in the Pacific. After seeing Holden's performance in the Korean War story, The Bridge at Toko-Ri (1954), Beedle's former squadron mates commented that he had been a lot like Holden's character in the film.

The same year, he co-starred with Humphrey Bogart and Audrey Hepburn in Sabrina. Bogart had not been the first choice to star in the film (Cary Grant turned the part down) and was bitter that his wife, Lauren Bacall, had not been cast in the title role. That made him difficult to work with on the set, but he was particularly rude to Hepburn, whom he mocked for her accent and her needing several takes to get her dialog right. Holden stepped in as a sort of big-brother to Audrey, partly to deflect Bogey's rudeness, and partly because he was smitten with the young beauty.

Hepburn called Holden "the most handsome man I have ever met", and began secretly meet him in his dressing room and away from the set. Neither seemed to care that Holden was 11 years older than Audrey, not to mention being married with three children (to be fair, Holden and his wife, actress Brenda Marshall, spent most of their marriage separated from one another). 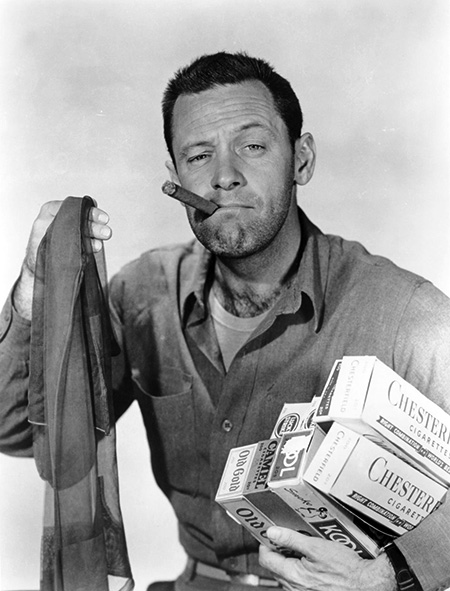 The affair burned passionately and became an open secret around Hollywood (perhaps not too open, director Billy Wilder claimed to have not known a thing about it). By the time the film wrapped, Holden was ready to divorce his wife and marry Audrey. She felt the same way and shared that she wanted to have three or four kids and retire from show business to raise them. At that point, Holden revealed that kids were the one thing he could not give her, having had a vasectomy some time earlier. Heartbroken, Hepburn immediately ended the affair and soon married and had a child with Mel Ferrer. She would have a series of unhappy marriages, and reportedly carried a torch for Holden the rest of her life.

Holden's career peaked with The Bridge over the River Kwai (1957). After that, his passion for acting faded, as did the quality of parts he was offered. He considered himself a moderate Republican. he had been the Best Man at the wedding of Ronald and Nancy Reagan but never had any political ambitions of his own. He worked toward the preservation of African wildlife and owned the Mount Kenya Safari Club, which became a popular jet-set destination. With friends, he set up the Mount Kenya Game Ranch as a wildlife preserve and inspired the formation of the William Holden Wildlife Foundation.

Aside from African wildlife, Holden's other passion was drink. Having battled alcoholism his whole life, on November 12, 1981, he put away the better part of a bottle of vodka before slipping on a rug on the way to the bathroom. When he fell, his head suffered a laceration from striking a table. His body was discovered four days later. Evidence from the scene indicated that he was conscious for at least half an hour after the fall, but either did not realize the extent of his injury or was simply unable to call for help.