Both Benito Mussolini and David O. Selznick called Alida Valli the most beautiful woman in the world but she never found long-lasting Hollywood success.

Choose your CD format
or order disks individually: Add to Cart Add to wishlist
Play a sample episode from May 30, 1948:

Making it in Hollywood is less about talent or beauty or ambition than it is about getting the right breaks. Admittedly, talented, beautiful people with a great deal of ambition tend to have the breaks go their way more often, but if you do not have these attributes it is still possible to become a Hollywood success. At the same time, even if you are holding all of these cards there is no guarantee that things will go the way you want them to. 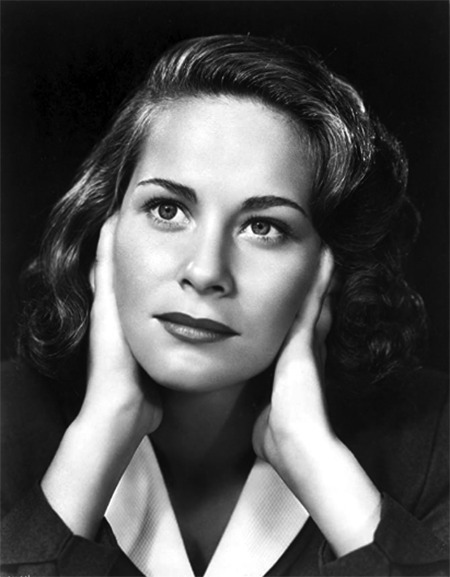 Countless girls dream of being discovered like Lana Turner was, drinking a soda pop when a talent scout spotted her. After becoming the toast of Tinsel Town, the next step is for a handsome nobleman to fall in love with them like happened to Princess Grace Kelly or Rita Hayworth when she married Prince Aly Khan. Alida Valli was already part of the Italian nobility when she came to Hollywood. Both Benito Mussolini and David O. Selznick called her "the most beautiful woman in the world" but she found stardom to be fleeting.

Born Baroness Alida Maria Laura Altenberger von Marckenstein-Frauenberg in 1918 in Pola, Istria, in what is now Croatia was then part of the Kingdom of Italy, she was descended from the Counts d'Arco and the granddaughter of Baron Luigi Altenberger. She moved to Rome with her mother after her father passed away and enrolled in an exclusive film school, the Centro Sperimentale di Cinematografia. She appeared in her first film, The Three Cornered Hat (Il cappell a tre punte) in 1934 during the "White Telephone '' era of Italian cinema. Two of her films during the Forties were censored for having an anti-Fascist message, and she was forced to go into hiding when she refused to appear in a pro-Fascist propaganda film.

After the War, she was discovered by David O. Selznick, who offered her a contract with Selznick International Pictures. Selznick had ambitions of turning Alida into the next Ingrid Bergman, and insisted that she be billed as "Valli" (she had taken the stage name Alida Valli while appearing in Italian films), thinking that the single name would make her seem exotic like "Garbo". She appeared in Hitchcock's The Paradine Case (1947) and had her greatest success as the top-billed female in The Third Man (1949). The success was not as great as it should have been because Selznick's studio was experiencing financial difficulties. In 1951, she began lobbying to be allowed to use her full name ("People get me mixed up with Rudy Vallee") and soon returned to Europe.

Although she enjoyed some success in French and Italian pictures, she was associated with a scandal which partially derailed her career. The body of Wilma Montesi washed up on a beach near Rome, touching off allegations of drug and sex orgies in Roman Society. Alida's lover and son of the Italian vice-Prime minister, Pierro Piccioni was implicated in the affair. Since she had been called to testify in the matter, it stained Alida's reputation even though everyone accused would be acquitted. In 1956, she made the decision to abandon film and invested in a company which produced Broadway plays in Europe.