An icon of elegance, grace, and style, Ingrid Bergman spun gorgeous performances in Casablanca, For Whom the Bell Tolls, Notorious, and Spellbound.

Choose your CD format
or order disks individually: Add to Cart Add to wishlist
Play a sample episode from January 29, 1940: 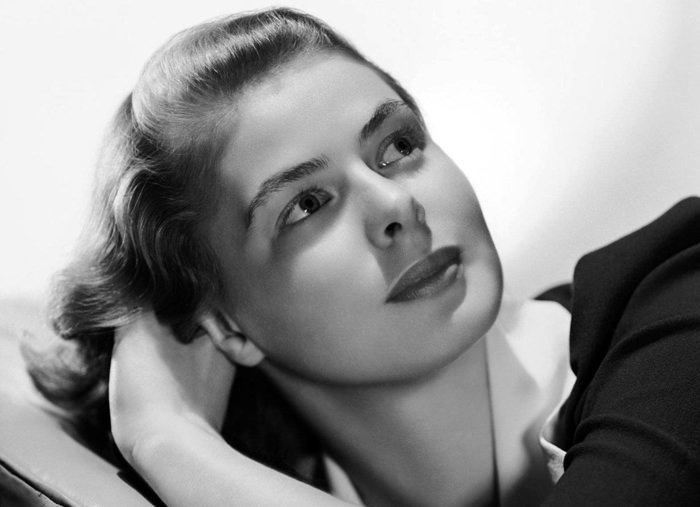 Ingrid Bergman is known as one of the greatest actresses of all-time, Swedish-born, her career having begun in that country only to blossom in America.  And of elegance, grace, and style, Ingrid Bergman spun gorgeous performances in Casablanca, For Whom the Bell Tolls, Notorious, and Spellbound. She was beloved by directors for her seriousness, care, and cleverness. Bergman is a fascinating example of the build 'em up and tear 'em down ethic the American people can enact with near cruelty.  She was thought of as wholesome and virtuous, exuding a natural beauty that somehow bespoke pure ideals.  Some of this was fueled by her roles in Rage in Heaven and Adam Had Four Sons, with Americans making the mistake of equating an actress with her characters.

During this time, Ingrid was in the midst of a marriage with neurosurgeon Peter Lindstrom, with whom she'd given birth to a daughter, Friedel Pia, in 1938.  However, in 1949, Bergman starred in Roberto Rossellini's movie Stromboli, and the two began a torrid love affair.  This became known, triggering a scandal, one that exploded when Bergman became pregnant with Rossellini's child while both of them were still married.  The American public poured outrage on a woman they'd previously built up.

Ingrid Bergman took refuge in Italy during this time, though she would soon end her marriage with Rossellini and return to the U.S. for an Oscar Award-winning performance in Anastasia and a series of triumphant performances throughout the late 60's and 70's.

Ingrid Bergman had a graceful, understated presence as an actress.  She elicited cool intensity with her clipped deliveries.  Her alto voice with its rich texture gave a gravitas to her words.

She contributed these qualities to the cream of American radio drama series, with most of her nearly two-dozen radio appearances coming on Lux Radio Theater and Screen Guild Theater.  Ingrid Bergman also made appearances on Great Scenes From Great Plays, and Radio Hall of Fame.

Quality was the name of Ingrid Bergman's game, as her appearances were in adaptations of only the finest material.  She reprised her film roles in Intermezzo, Gaslight, Notorious, For Whom the Bell Tolls, and Casablanca.  She also appeared in productions of Jane Eyre,  A Doll's House, and Anna Karenina.

This collection brings together nuanced performances in classic works by one of the greatest actresses of all time.