A Ticket to The Breakfast Club 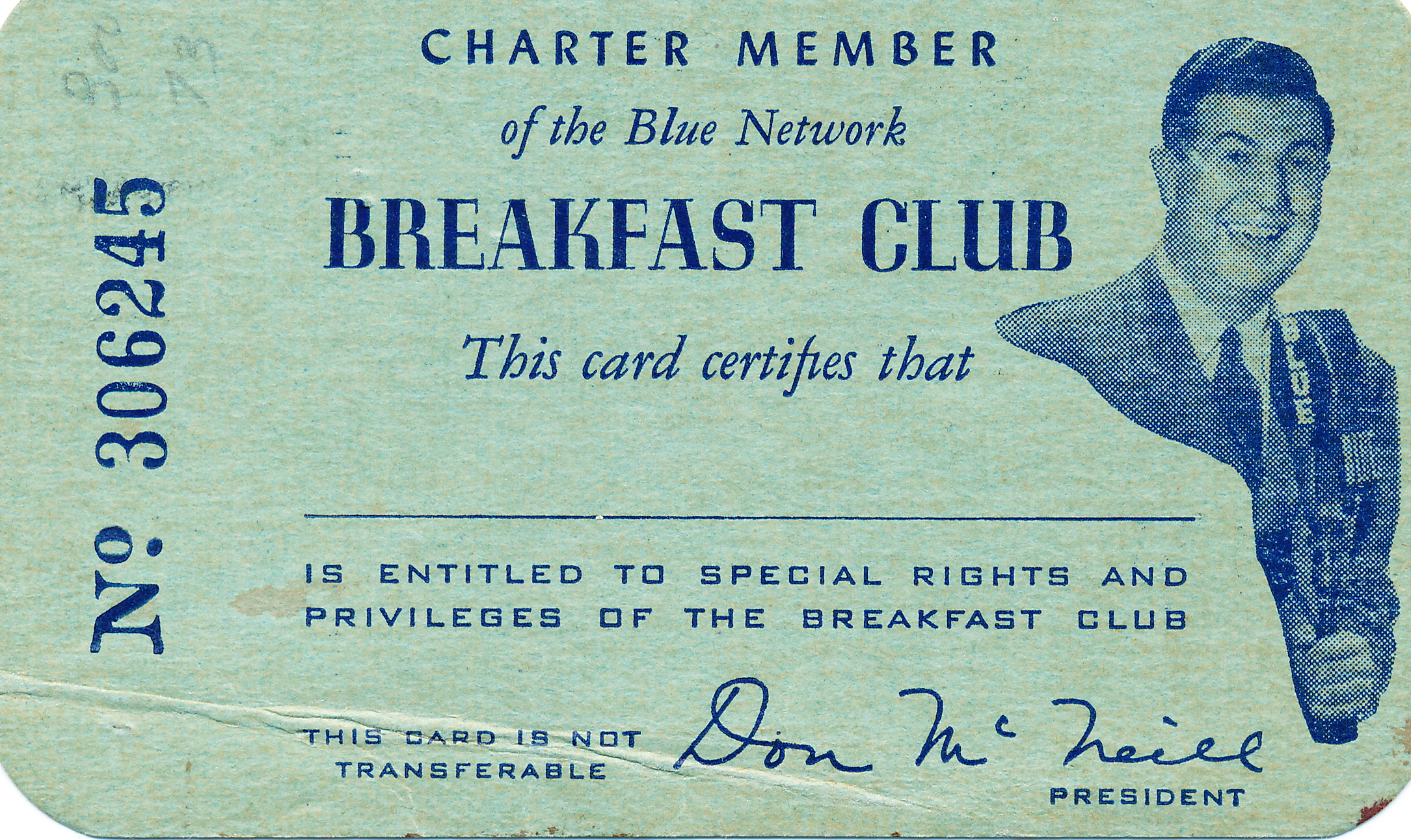 In the years immediately following World War II, a majority of Americans still relied on AM radio for their news, sports and entertainment.  At a time when few households had television sets, major stars such as Bing Crosby, Jack Benny, Bob Hope, Burns & Allen, and Fibber McGee & Molly used radio to reach home audiences.

Originating from Chicago, The Breakfast Club first went on the air on June 23, 1933 over NBC’s Blue Network.  Hosted by Don McNeill, the initial broadcasts consisted of McNeill, singer Dick Teela, an announcer, a sound engineer, and a 12-piece orchestra of NBC staff musicians.  Between musical numbers, McNeill would read jokes, poems, and stories of sentiment & inspiration clipped from newspapers. Since it came on at 8:00 a.m. Chicago time, network executives assumed that The Breakfast Club didn’t have much of a listening audience.  Nor did it have a commercial sponsor. 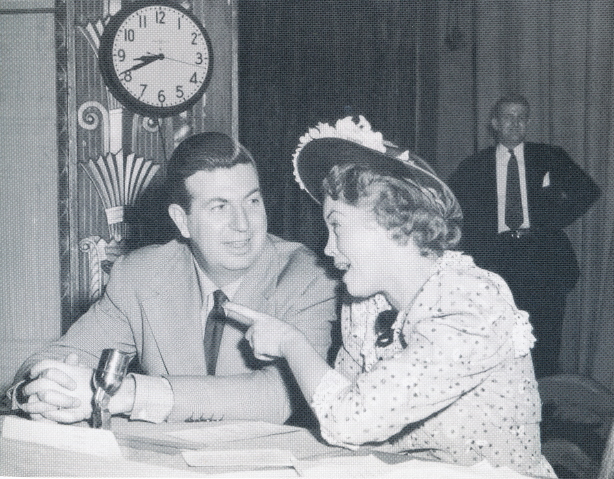 Despite the odds against its survival, The Breakfast Club managed to hang on.  After three months on the air, mail from listeners averaged 100 letters a day.  At McNeill’s request, NBC broke its long-standing rule and allowed him to do the program without a pre-approved script.  As a result, the show became more spontaneous, eventually earning the nickname “the most unrehearsed show on radio.”

In 1936, McNeill and a slowly expanding cast passed the 1,000 broadcast mark.  Beginning in 1938, a studio audience was admitted to the broadcasts for the first time, providing McNeill with an opportunity to conduct impromptu interviews.  After being chosen as radio’s most popular morning show by Radio Guide Magazine, The Breakfast Club finally attracted its first commercial sponsors in 1941.

In 1944 the size and loyalty of The Breakfast Club’s listening audience became clear  when one of its sponsors offered Breakfast Club charter memberships.  Nearly one million requests were received from every state of the union and several foreign countries.   Both Supreme Court Justice William O. Douglas and FBI Director J. Edgar Hoover were numbered among its fans.  The Breakfast Club was also one of the first radio shows to be transcribed by the Department of Defense and made available to overseas military radio stations through The Armed Forces Radio Service.  When NBC’s Blue Network was sold and became the American Broadcasting Company, The Breakfast Club was included in the deal, providing the new network with a reliable source of advertising revenue and a means for capturing audiences for the programs that followed it. 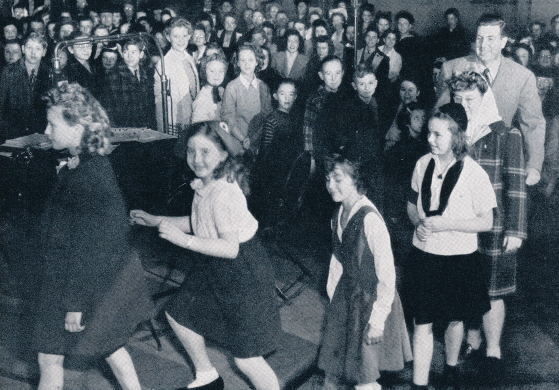 No visit to Chicago was complete without attending a Breakfast Club broadcast.  Although admission to these broadcasts was free, requests for tickets had to be made at least two to four weeks in advance.

In 1947, The Breakfast Club originated from Studio A on the 19th floor of the Merchandise Mart.  Ticket holders had to arrive at the Mart before 7:30 a.m.  They would be met by Officer Bob Newman who had been greeting early morning visitors since the Breakfast Club first went on the air.

Once inside the Mart, “Breakfast Clubbers” were directed to a bank of elevators marked American Broadcasting Company.  Here, Herman Benning, who had been the tower elevators’ guardian since 1931, saw to it that they had a non-stop ride to the 19th floor.

To the left of the elevators on the 19th floor was an ABC receptionist who directed ticket holders to go down the corridor to their left and then to Studio A on their right. Standing behind a roped off area opposite the reception desk would be 50 or more people who had come without tickets. A few lucky ones would sometimes get into the studio when ticket holders failed to arrive by 7:30 a.m.  The rest saw the broadcast while standing in a glass-enclosed observation room above the studio. 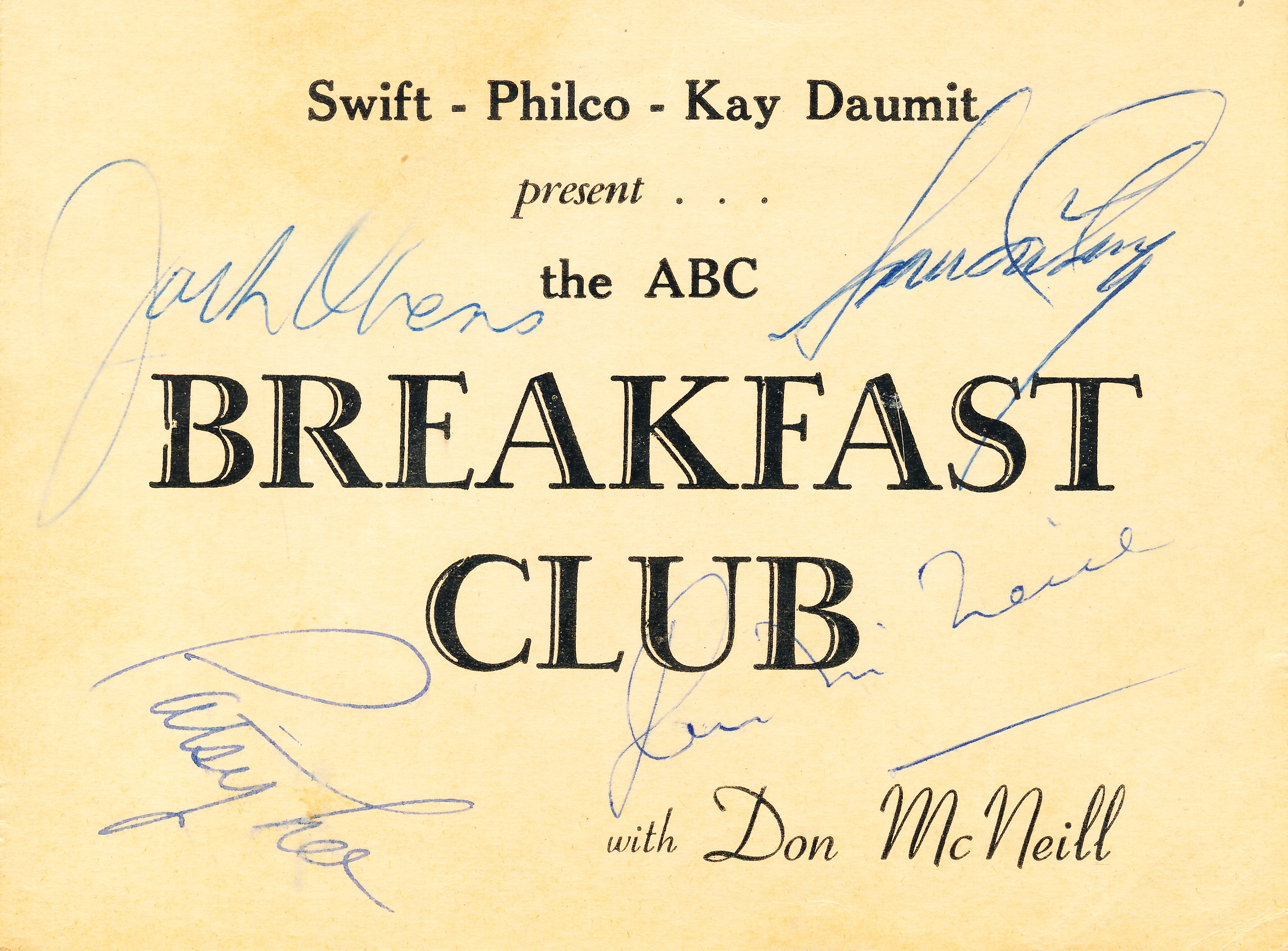 Entering the studio, visitors would be shown to their seats by an usherette who would give them audience information cards to fill out.  Based on the information written on these cards, audience members would be selected as interviewees.

By 7:25 a.m., most of Studio A’s 450 seats would be filled.  A final orchestra rehearsal would take place while, inside the control room, Don McNeill, his personal secretary Mary Canny and producer Cliff Peterson would go over the audience cards looking for unusual jobs, names and places, poems and jingles, gags and just plain corn.

During the final minutes leading up to airtime, announcer Don Dowd would “warm up” the audience for its part in the show.  This might include coaching them to participate in a commercial.

A last-minute gag from the cast insured that The Breakfast Club went on the air with a burst of laughter.  Then came the First Call to Breakfast theme, set to an original melody and sung by Toastmaster Don McNeill:

We got up bright and early

The cast would then gather around a prop breakfast table - no food was ever served - while Don commented on the weather and events of the day.  Next, the orchestra would play a spirited number intended as a “waker-upper” for listeners at home. The first commercial usually involved comic Sam Cowling in a bit of horseplay.  Then Jack Owens or that day’s guest songstress would sing a popular song. The program’s first 15-minute segment concluded with Don taking a hand-held microphone down into the audience for an interview or two.

The Second Call to Breakfast began with Jack Owens and Patsy Lee singing:

Then either Patsy or Jack would sing a popular ballad.  This was followed by Don and Sam doing a commercial for Swift’s meat products.

This quarter hour featured Prayer Time, which was first introduced by Don McNeill during World War II.  He would introduce it by saying:

All over the nation,

a moment of silent prayer –

For a world united in Peace –

Bow your heads – Let us pray!

The studio lights would be dimmed and thousands of listeners would join the studio audience and cast in 15 seconds of silent prayer.

The Third Call to Breakfast opened with a nod to the sponsor:

A suggestion if we may:

Swift’s products on the table

That we march around each day.

This served as a lead-in to one of The Breakfast Club’s best-remembered features: The March Around the Breakfast Table.  Following an introduction from Don, the orchestra played a spirited march while children from the audience followed Sam Cowling as he pranced up and down the aisles and weaved around the prop breakfast table and chairs.

Next, “cruising crooner” Jack Owens would roam through the audience with a hand mike, serenading matrons, housewives, grandmothers, and bobby-soxers with songs of love and devotion.

The Fourth Call to Breakfast opened with another salute to a sponsor:

So may we bring yah – 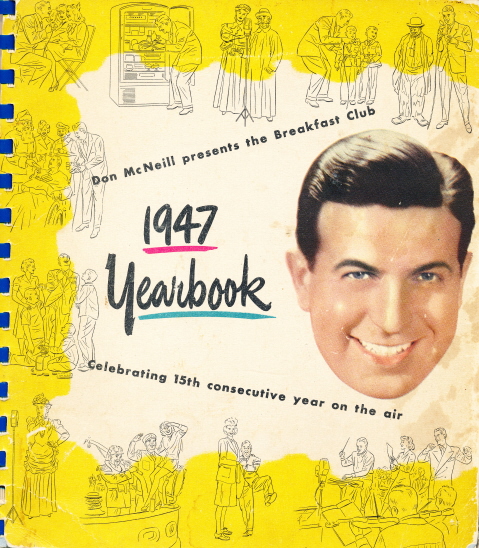 It was during this segment that Aunt Fanny (Fran Allison) would usually appear to chat with Don and to read a rambling and gossipy letter from her friend “Nettie,” telling all the latest news about the folks back home including the Bert and Bertie Beerbower, Orphie Hackitt and the Fritzsingers; all characters that Allison had created.  Afterwards, Don would invite Patsy Lee to sing to some gentleman in the audience.

A regular feature of this quarter hour was Inspiration Time, where Don would read an inspiring poem or story such as “A Woman’s Prayer for the Child to Come,” “Beatitudes for a Housewife,” “To a Child that Enquires,” and “Did Christ have a Little Black Dog?”  At the request of listeners, many of these poems and stories were rebroadcast annually and would appear in The Breakfast Club’s yearbooks.

Next, Sam Cowling would read snippets of wisdom from his Almanac of Fiction ‘n Fact:

Fun is like insurance – the older you get the more it costs you.

Stealing a kiss may be petty larceny, but sometimes it’s grand.

The strangest dog in the world is the hot dog – it always feeds the hand that bites it.

Following a few more interviews with audience members, Don would join the cast around a standing microphone for the Last Call to Breakfast closing announcement:

“This is Don McNeill saying so long and be good to yourself.”

The orchestra would then play the goodbye theme as the program ended.

Afterwards, the cast would remain to sign autographs before retiring to the second-floor Merchandise Mart restaurant for a late breakfast.

Over the years, attempts were made to televise The Breakfast Club.  Although these proved unsuccessful, the radio version continued to be heard until December 27, 1968.  Don McNeill concluded that final broadcast by saying:

(If) there’s been any secret of success in this show it’s believability.  I do stumble around and I do make mistakes, but I mean everything I say and have all these years.

Nothing I would say could mean more than having all of you, many of you, sometimes three generations of you, with me all these years.  And so I hope you’ll be seeing me and hearing me hither and yon someplace.  I wish all of you the greatest of success and happiness.

A number of Breakfast Club broadcasts survive in good sound, allowing modern-day listeners the opportunity to hear Don McNeill and his crew in one of radio’s most popular and long-running morning shows.

Don McNeill and His Breakfast Club by John Doolittle (2001), published by the University of Notre Dame Press.