Ziegfeld Follies of the Air

Experience the music and laughs of the famous Ziegfeld Follies entertainers like Helen Morgan, and Will Rogers.

Choose your CD format
or order disks individually: Add to Cart Add to wishlist
Play a sample episode from April 10, 1932:

In 1932, the Follies came to radio as The Ziegfeld Follies of the Air. The radio show featured many of the same performers who appeared in the Broadway shows like Fanny Brice, Billie Burke, Jack Pearl, Helen Morgan, and Will Rogers plus the man himself, Florenz Ziegfeld. 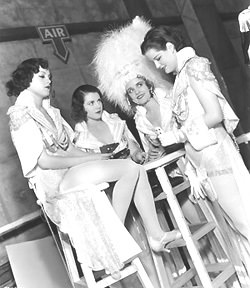 Much like the live revue, the radio show featured music, singers, sketches and comedy bits. Eddie Dowling hosted the show with Al Goodman leading the orchestra. The half-hour series had several sponsors beginning with Chrysler Motors and aired from April to June 1932.