We continue on our journey through early 20th century recordings: during this time wax cylinders and other recording devises were becoming more popular. 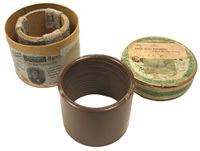 In Wax Cylinder 3 we continue on our journey through early 20th century recordings.  This collection includes Wax Cylinder from 1905 and 1906.  It was during this time that wax cylinders and other recording devises were becoming more popular.

Other popular entertainment revolutions were occurring during this exciting era.  By 1906 there were over 4,000 Nickelodeon across America entertaining audiences.  And on Christmas Eve 1906, the first radio program in the US was broadcast to ships at sea from Massachusetts.

Included in this recording are popular music stars such as