Working Undercover is filled with danger, but it can be the only way for the Cops to get the Bad Guys

Choose your CD format
or order disks individually: Add to Cart Add to wishlist
Play a sample episode from October 26, 1953:

One of the most popular tropes from cop movies and police procedural TV Shows explores the perils of the Undercover Operative. A cop working undercover faces many unique and dangerous challenges, both of the physical as well as moral and legalistic ones.

Undercover work certainly runs contrary to the expected operations of a legitimate Police Force in a Democratic Society. Cops have to follow the rules (even if the Bad Guys get to ignore them) and working Undercover seems to skirt, even ignore those rules. While attempting to infiltrate a Criminal Organization, a straight-laced Cop might have to break the Law in order to enforce it. 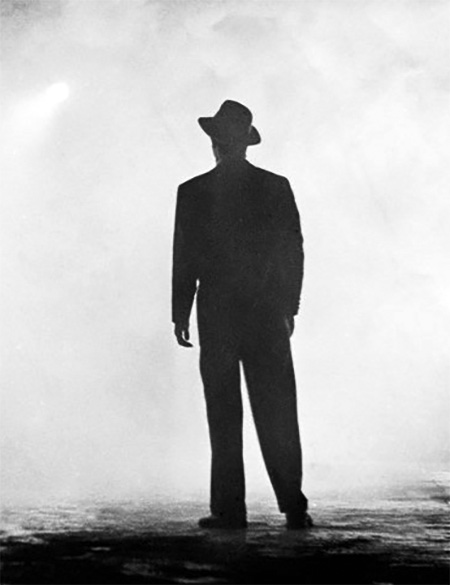 Although Undercover Operations are a popular part of Police Fiction, Undercover Cops have been around nearly as long as there have been Uniformed Cops. Sir Robert Peel formed the Metropolitan Police of London ("Scotland Yard") in 1829, and from the beginning, the Yard made occasional use of Plain Clothed Detective Officers. The public raised an outcry against the use of Plainclothes men, fearing they would be employed in Political Suppression.

The New York City Police Department formed the Italian Squad in 1906 to combat Organized Criminals and Intimidation Rackets in the city's poorer Immigrant neighborhoods. The success of the Italian Squad inspired Charles Joseph Bonaparte, Attorney General under Teddy Roosevelt, to form the Bureau of Investigation, a forerunner of the modern FBI.

There are some obvious risks involved in Under Cover Operations, all of which can be played for effect in the fictional setting. The most obvious is that the officer, by working in disguise closely in a criminal organization is putting his head in the lion's mouth. To have his identity discovered by the bad guys will swiftly result in a dead cop.

A subtler danger to the operator is that he may be forced to engage in illegal activities as a means of maintaining his cover. A certain degree of prosecutorial immunity may be granted to the officer who is "just doing his job" of investigating the Bad Guys, but Cops are trained to stop crooks, not to become an outlaw. The actions necessary to maintain cover often present legal and moral quandaries.

It is important to distinguish between Undercover Work and Plainclothesmen or Detectives. Although the Police Uniform is a symbol of authority, often a senior officer will be more effective in his duties while wearing civilian attire. These detectives make no secret that they are acting for and with the full support of their Departments, whereas the Undercover Man can only depend upon his wits and experience.

As popular as Undercover Cops were in TV and Movies of the Sixties and early Seventies, they appeared on the Radio in the early Thirties. The popular West Coast Procedural Drama Calling All Cars focused on Uniformed Patrol Officers but frequently looked at Undercover Operatives. The Cold War drama, I Was a Communist for the FBI has its main character, Matt Cvetic constantly infiltrating the Nation's hidden enemies undercover at great danger. Plainclothes Detective Sergeant Joe Friday of Jack Webb's Dragnet showed the need for Departmental support on many Undercover operations.