The Adventures of Frank Race

With a "James Bond meets Johnny Dollar" cachet, The Adventures of Frank Race follows a former OSS officer around the world from one scrape to another and in and out of the arms of another pretty girl.

"Before the war, Frank Race worked as an attorney,
but he traded his law books for the cloak-and-dagger of the OSS.
When the war was over, his former life was over, too . . .
adventure became his business! "

And business was good. 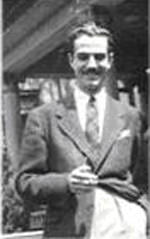 The Adventures of Frank Race premiered in May of 1949. The intrigue of espionage during WWII was still in the minds of audiences.Frank Race carried the intellect from his former career as an attorney, and added the cachet of experience with the OSS, Office of Strategic Services, fore-runner of today's Central Intelligence Agency. When his service to his country was over, Race was not satisfied to settle down in a law office. Along with his associate (Fancy word for Sidekick) Marc Donovan, Race's adventures often began in New York, but took him all over the world.

The program has been called a "Johnny Dollar meets James Bond." Race and Donovan do investigations for a major insurance firm, as in Johnny Dollar. Race's adventures will include a fist fight or two, and a rousing chase scene. In these situations Donovan, a former NY cab driver who hasn't lost the accent, is called upon to save the day. But with the other factor in Race's adventures, the attentions of innocent, beautiful, and not so innocent women, Race is on his own. This is of course the James Bond part of the formula.

The series originally starred Tom Collins, former star of Chandu the Magician. About half way through the run of 43 episodes, the role was taken over by Paul Dubov. The show was produced for Syndication. It was sold to individual stations rather than the networks. Rather than advertising national sponsors, local businesses would advertise during the program. This accounts for the long breaks bracketed by organ music during the recording. For more espionage and adventure see: The Silent Men, I was a Communist for the FBI, Cloak and Dagger, Counterspy - David Harding!, Top Secret, Dangerous Assignment, Harry Lime (The Third Man), Secret Agent K7 Returns, and The Man Called X.