Tom Corbett, Space Cadet helped to show young people the sort of drive and dedication it would take to be a leader in Outer Space. It did not hurt that each episode was filled with action and adventure at every turn.

Choose your CD format
or order disks individually: Add to Cart Add to wishlist
Play a sample episode from January 15, 1952:

Tom Corbett, which also appeared in comic books and a newspaper strip, began its dramatic life as an early TV series. The show was fueled by the highly successful films, Destination Moon, and by Captain Video. 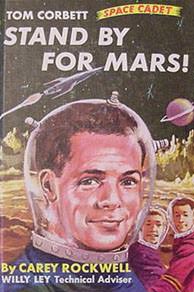 Tom Corbett blasted into "outer" space first in comics and newspaper comics, and had already blasted onto the small TV screen as one of the first TV kiddie's series in 1950. The same cast that did the TV show did the radio version, like Space Patrol did. Of course, there was no reason not to…the sponsor Kellogg's was pleased to get the kids as fans both ways. Jackson Beck, great radio announcer (Superman, Mark Trail) and actor (Hop Harrigan, Cisco Kid, Bluto on Popeye cartoons) counted down to the half-hours exciting adventures of the Solar Guards on "distant planets and far-flung stars."

Based loosely on the Robert A. Heinlein (who also wrote for Beyond Tomorrow) novel, Space Cadet, and bringing along some space baggage from Flash Gordon and radio's classic Buck Rogers in the 25th Century, the stories are really quite good. They center around the voyages of the space ship Polaris, whose crew includes pilot Tom Corbett (Frankie Thomas), Tom's best buddy, the often hot-headed Astrographer Roger Manning (Jan Merlin), Astro, the alien from Venus who handled the Powerdeck, Dr. Joan Dale (Margaret Garland) and Captain Strong (Edward Boyce.) Commander Arkwright, head of the Space Academy, is played by Carter Blake. 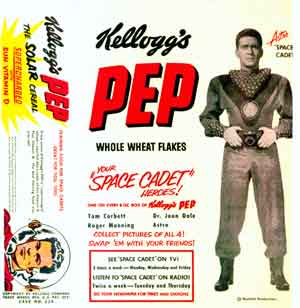 The episodes are heavy on action, with good special sound effects for the blastings and power thrusters, and carry along with the action a very definite pride in Space Academy procedures and principals. In that sense, it was a forerunner of Star Trek that was still far off in the future.

Tom Corbett is remember fondly by young sci-fi fans as a thrilling show with very strong dialog ("Aw, go blow your jets…") and plenty of action taking care of space baddies that often sound just like hometown thugs. Imagine Hop Harrigan going into the Solar Guards 400 years from now. Tom Corbett, Space Cadet was there, rocketing into the future and adventure!

There are a bunch of great kid's shows on radio, many of them adventure and superhero serials, such as Captain Midnight, Superman, Green Hornet, Hop Harrigan. Air Adventures of Jimmie Allen, and Sergeant Preston of the Yukon. In terms of science fiction shows, Buck Rogers in the 25th Century ran throughout most of the 1930s and '40s, Flash Gordon and Space Patrol was another popular kid's show that was a contemporary of Tom Corbett, Space Cadet.