Choose your CD format
or order disks individually: Add to Cart Add to wishlist
Play a sample episode from April 18, 1945:

Born in Guadalajara, Jalisco, Mexico, Guizar was encouraged in his singing by his mother. However his conservative father wanted him to study medicine. Telling his family that he would attend Columbia University's medical school, he found New York to be a hot bed of activity during the early days of radio. 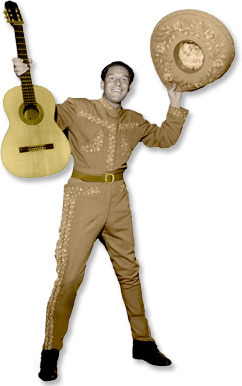 Ranchero singers, including Negrete, Jesus "Chucho" Navarro Moreno and Alfredo "El Guero" Bojalil Gil were all seeking radio and recording work. Guizar played several Prohibition-era night clubs until landing a spot on radio, and he dropped out of school.

Moving to Los Angeles for his radio show, Tito Guizar y Su Guitarra, Guizar was able to land a few minor film roles for Warner Bros. In 1936 he would be offered the leading role in Alla en el Rancho Grande. The title song from the movie would become Guizar's signature song. The song describes an idyllic life in the Mexican countryside, and is often compared to Roy Roger's Happy Trails. 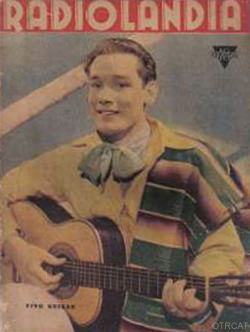 Guizar would get the chance to appear with Roy and Trigger in the 1948 film, The Gay Ranchero, playing Nicci Lopez, Sheriff Roy's sidekick.

Guizar married Mexican singer Carmen Noriega in New York in 1932. He would describe their life together as "Idyllic." In his later life Guizar was noted for his easy smile and readiness to break into song. He was happy to share his personal philosophy; "El pasado es polvo, el future, no mas una brisa. Si quieres ser feliz, vive por ahorita!" (The past is dust and the future a passing breeze. If you want to be happy, live for the moment!)