One of the most popular Exotica bands, The Three Suns were formed by guitar-playing Al Nevins and his accordion playing brother Morty from Brooklyn, and their cousin Artie Dunn, a vaudeville and radio performer who sang and played the electronic organ.

Choose your CD format
or order disks individually: Add to Cart Add to wishlist
Play a sample episode from August 16, 1956: 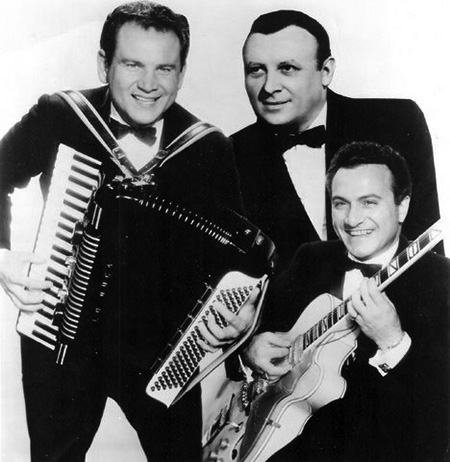 The dawn of the space age was largely due to the Cold War technology race between the United States and the Soviet Union, but it is easy to forget that the era held as much technological advancement as political posturing. The so-called "Kitchen Debate" between then-Vice President Nixon and Soviet Premier Nikita Khrushchev took place in a gadget-laden "kitchen of the future" which showcased electronic, electrical, and mechanical labor-saving devices which were just around the corner for American housewives.

From the perspective of a world filled with MP3 players, laptop computers, and smartphones, many of the technological marvels of the period seem positively quaint, but at the time the notion that an average middle class working Joe could not only enjoy these wonders but afford to have some of them in his own living room was positively out of this world.

Radio and phonograph records had been bringing music into homes for decades, but in the fifties and sixties technology had improved enough to give rise to High Fidelity, or Hi-Fi music systems. "High Fidelity" meant that the sound quality would be as close to the original musicians as possible. This standard became attainable by the use of quality loudspeakers electronic amplifiers both in the recording studio and on the home set. After a hard day at the office, the amateur audiophile could come home, mix some cocktails at his home bar, and put a dick on the turntable and enjoy music as good or better than what he would have heard at a smoky nightclub.

The further removed from the War years we go, the more we see big-band Jazz falling out of favor. Before the kids began "ruining" Hi-Fi sets with their loud Rock 'n' Roll music, one of the most popular things coming out of the speakers was Exotica music. The invention of the Exotica genre is credited to Martin Denny whom Donn Gantt ("Don the Beachcomber") had hired to lead the house band at the Shell Bar in Honolulu. The club featured a pond populated with bullfrogs near the bandstand. Denny noticed that the frogs would croak while they were playing but went quiet when the music stopped. When the band was recording for Liberty Records, Denny had the musicians do bird calls over the music while he provided the frog croaks, and Exotica music, along with the Tiki bar craze, was born.

While most Exotica music calls to mind a feeling of the South Pacific, South America, Southeast Asia, and even Africa, one of the most popular Exotica acts made listeners feel they were on a trip to Outer Space! The Three Suns were formed by guitar-playing Al Nevins and his accordion playing brother Morty from Brooklyn, and their cousin Artie Dunn, a vaudeville and radio performer who sang and played the electronic organ. They began playing as a group in 1939, and in 1940 won a two-week gig at the Circus Lounge of New York's Piccadilly Hotel which stretched into a seven-year engagement.

The trio managed to bring a wide range of musical effects from their simple yet versatile instruments (Al began playing violin before changing to electric guitar). Their first hit recording was "Twilight Time" (1944), which they recorded without lyrics, Les Brown and His Band of Renown covered the song in 1945 with lyrics by Buck Ram. Although the trio remained the heart of the Three Suns, they were not afraid to expand their sound by adding rhythm guitar and bass to form a quintet, or piano to play as a quartet.

The band's lineup became even more flexible in the late Fifties when Mort Nevins began taking a greater interest in producing records than playing on them. Brother Al formed a music publication and songwriting service called Aldon Music with Don Kirschner which launched more than 200 Top Forty hits. The Three Suns' sound became even more experimental after the formation of Aldon Music, even though Al suffered a series of heart attacks which kept him from performing.

Former First Lady Mamie Eisenhower said that the Three Suns was one of her favorite music groups.