If you're reading this webpage on your computer, you already have everything you need to enjoy OTRCAT MP3 CDs; they are guaranteed to play on your computer. Click here for more information about "What is MP3?"

WHERE TO BUY A MP3 PLAYER: 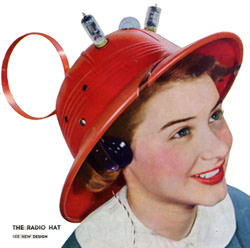 Many new car stereos are "MP3-enabled" and many DVD players also play MP3 CDs. Ordering from Amazon.com is convenient, but local stores such as Walmart, CVS, Walgreen's, Target, and BestBuy often stock a multitude of MP3 player models. There are a lot of MP3 players, even by the same manufacturer, which are fickle about which shows they will playback. Discontinuation of models is frequent and finding specific models can be challenging. Expensive MP3 CD players are not necessarily the most reliable.

Try out an OTRCAT MP3 CD in the floor model at your local electronics store or take an MP3 player home, but make sure they have a good return policy without restocking fees. Below are a list of user recommended models (which have not been first-hand confirmed to work by OTRCAT.com).

Just put in the MP3 CD and press play! As easy to operate as a cd player, these inexpensive "Walkman" style portable MP3 CD players play the MP3 CDs directly:

Great for indoor and outdoor listening, these inexpensive boomboxes play the MP3 CDs directly and many also have AM/FM tuners:

Solid-state players fit in the palm of your hand and plug into your computer to transfer old time radio shows via USB cable rather than playing the CDs directly.

Click here for step-by-step tutorials on how to load the old time radio shows on your player...

List of other listeners' recommended solid-state players (model numbers may be out of production)...

DVD PLAYERS : LISTEN TO OLD TIME RADIO IN THE CAR:

MP3 players should support "32kps 22khz bitrate MP3 files" and "Joliet' format CDs." If the player supports these specs, it should play the OTRCAT MP3 CDs fine, but because every MP3 player has its own peculiarities, the disks are only guaranteed to play on your computer. Typically most of the new generation MP3 players support a multitude of bitrates including newest generation DVD players. 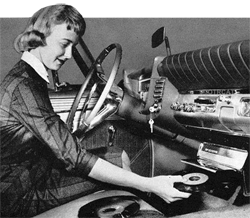 Tips on Listening to
Old Time Radio in Your Car 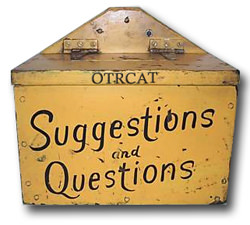 Listening to OTR on an MP3 player not yet listed?
Let us know!  Please leave your comments below.

Spoiler : I always enjoy my old time radio programs! I have them all loaded on a 160gb iPod so they are all together. I used to have 2 iPods carrying nothing but my shows. Can't go anywhere without them! Thanks!

Reply
Spoiler : a cheap, new or refurbished smart phone for about $50. That way I avoid the clunky GUI that some many MP3 players are cursed with and be able to use it for streaming and web browsing. You can use all the features except the phone and mobile data. Yes, you can probably find a purpose built MP3 player with those features but most of the time, they will probably be Smart Phones where they disabled the phone functions in the software.

Reply
Spoiler : An old cell phone lying around can do the trick perfectly. You'll need to check the maximum supported microSD card, but other than that, it can be anything you want that doesn't rely on cell service. I have an old LG Stylo 3 of mine that I use as a media player - it will support a card up to 2TB in size, so I've got room for upgrading, if necessary.

Reply
Spoiler : Thank you so much. By the way, I have a friend who is trying to find an MP3 player that plays the OTR CDs successfully. I have an 'oldie but goodie' Panasonic from the last century (God, that sounds OLD), that plays them all, but apparently not all of the newer players deal well with compressed mp3 files. Any advice you could give would be helpful. Thanks for maintaining the Old Time Radio site. I think we all can benefit from 'the theater of the mind', listening to radio shows and using ones imagination to fill in the actors, landscapes and scenery. Keeps the mind active. This mind exercise seems to be lost on the 'now generation'.

Reply
Spoiler : I just wanted to take a moment and say thank you very much Jon. Your timely assistance in responding to my concern about difficulty downloading/transfering is greatly appreciated. The instructions you gave me to follow were accurate and simple to follow. I am now listening to my radio shows on my nano iPOD with great pleasure, thanks to you. Be assured that your professionalism and competence is greatly appreciated. SCORE #1 for OTRCAT in CUSTOMER SERVICE. OTRCAT, I am proud to say you will have me as a customer for quite some time.

Reply
Spoiler : I have a cheap as chips ($25USD) Mahai bluetooth player from eBay 64Gb cards work fine. However the cheaper machines usually have crap file systems and it's very hard to navigate,This one is fine just put the programmes in a folder and then open the folder and they will be in order(hopefully). The bluetooth works fine, but the range is rubbish (shirt pocket , rather than back trouser pocket). I have a HIRes FLAC and DSD player and to be fair it's ok with a 128GB card, but the file navigation isn't great either. The sounds is outstanding I think 24bit WAVE is about the nicest though the DSD512 is pretty smart too. But for speech and all and any variable bit rate MP3 the wee cheapo one is fine/ Most OTR has a limited frequency range anyway to bluetooth isn;t going to be a constraining feature. but with DSD the bass resolution and clarity is astonishing, it's the first time my very clever headphones have had to sweat for a long time. And as an experiment just tried a 128GB card in it, and it works fine

Reply
Spoiler : Sony made/makes a line of MP3 Walkman products. I like mine.

Reply
Spoiler : I just use my phone. Made sure to get the 256gb iPhone model and it holds so, so much.

Reply
Spoiler : I use a Klantop MP3 Radio with mini sd card upgrade

Reply
Spoiler : iPod classic hacked with Rockport. I don’t use iTunes which made OTR listening difficult. Nothing is better.

Reply
Spoiler : I am long-time customer, listening to your on my mp3 players. I am excited to learn you now offer free option to download purchased programs. I often listen to my radio programs on my Apple iPod. Otrcat offers more, and better audio programs than do the Apple App.

Reply
Spoiler : My player is a Sony CD model CFD-S070P. I love that it remembers where I left off, as long as the power source isn't interrupted. Got it on Amazon years ago.

Reply
Spoiler : I just discovered that I can listen to my downloaded radio shows from your website. Awesome! This means I can listen to them on my Kindle, which I use more than my PC these days. I tried to download one collection onto the Kindle and it said I didn't have enough memory, so being able to listen from the website is great.

Reply
Spoiler : I am very pleased with the " Sony MHC-EC55" that I purchased from Wal_Mart. It is a mini hi-fi component system, 3 pieces. It has very good volume and was fair priced at just under $100.

Reply
Spoiler : I HAD A COBY WHICH I DIDN'T LIKE... EVERYTIME YOU STOPPED IT WOULD START OVER AGAIN WITH THE FIRST ON THE LIST... I HAVE THREE PHILLIPS GO GEARS... WHICH I LOVE! I GOT THE FIRST TWO AT TARGET... BUT THEY NO LONGER SELL MP3 PLAYERS... SO I ORDERED ONE ON AMAZON AND THE BATTERY WENT OUT AFTER A MONTH... I CAN USE IT ON ELECTRICITY AT HOME. I LOVE THE FACT THAT NO MATTER HOW LONG THEY ARE OFF... THEY PICK UP RIGHT WHERE I LEFT OFF UNLIKE THE COBY.

Reply
Spoiler : I did purchase a Naxa NPB-263 portable from Walmart which I will have Friday. If your cds play properly I will purchase mre items. I have over 7700 broadcasts on cassettes but its to expensive to collect this way. I remember Radio Yesteryear charged $12 an hour in the 70's and today it runs $3.00 an hour or more. That's why I am interested in the MP3 format. I don't want walkman or i-pods , prefer a boom box or cassette player with is own speaker.