After taking up acting as a way to break her childhood shyness, Sylvia Sidney earned a reputation for having the "saddest eyes in Hollywood."

Choose your CD format
or order disks individually: Add to Cart Add to wishlist
Play a sample episode from December 02, 1945:

"Lux Radio: Blood on the Sun" 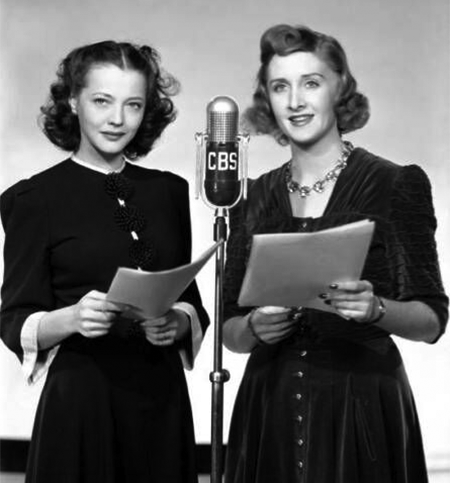 At some point in every little girl's life, they tell their parents that they want to be an actress. Most of them are entranced with the glamor of being an actress, others with the beauty they associate with celebrities. Some parents will immediately remind their little girl of the unlikeliness that their dreams could ever come true, others might accept the dream but expect that she will let the dream pass with time.

When little Sylvia Sidney told her parents that she was interested in acting they received the news with a sense of relief. Born to Russian and Romanian Jewish immigrants in the Bronx, 1910, Sylvia was a bright little girl but suffered from a debilitating shyness that held her back in school and other activities. Maybe acting would show her a path out of this shell. At the age of 15, Sylvia transferred from public schools to the Theater Guild's School of Acting.

Early on, Sylvia avoided glamorous roles, placing more value on roles in high-quality productions. She began to attract favorable reviews while still performing in school productions, and she was noticed by Hollywood talent scouts as well. She made her screen debut in the silent comedy romance Broadway Nights (1927, First National Pictures, the film was also the first film appearance by Barbara Stanwyck and Ann Sothern).

When filming wrapped, Sylvia happily returned to the stage only to discover that good roles were becoming harder to find. She joined a stock company touring Colorado. Eventually, she was spotted by another talent scout and signed with Paramount. Her big break came in City Streets (1931, directed by Rouben Mamoulian). Sylvia's role as the gangster's daughter and love interest to the hero (played by Gary Cooper) was supposed to have been Clara Bow's last under her Paramount contract but had to step aside due to mental health issues.

Through the Great Depression, Sylvia found her typecast as the pretty girl wrongly accused of a crime, sent to jail, or both. However, these roles gave her the chance to work with Hollywood's top leading men like Cooper, Spencer Tracy, Henry Fonda, Joel McCrea, Frederic March, George Raft, and Cary Grant. While working on Hitchcock's Sabotage (1936, General Film Distributors, UK), Sylvia was one of Hollywood's top-paid actresses, earning $10,000/week.

Good roles became harder to find with the new decade. After The Wagons Roll at Night (1941, Warner Bros) starring Humphrey Bogart as a circus owner and Sylvia as his girlfriend, she went on a four-year hiatus until the anti-Japanese propaganda film opposite James Cagney in Blood on the Sun (1945, United Artists).

Sylvia's movie career slowed in the fifties and all but disappeared in the sixties, although she appeared in several made-for-TV movies. Animator and filmmaker Tim Burton was a fan of Ms. Sidney's work, and cast her in Beetlejuice (1988) and Mars Attacks! (1996, both films for Warner Bros).

An enthusiastic needle pointer, Sylvia wrote two books on the subject. In 1999, she underwent chemotherapy treatments to battle esophageal cancer but ultimately lost the battle on July 1, 1999. A Star on the Hollywood Walk of Fame at 6245 Hollywood Blvd was dedicated in honor of Sylvia Sidney's contributions to Motion Pictures.