Oklahoma City Bombing At 9:02 AM on Wednesday, April 19, 1995, the United States fell victim to the worst domestic terrorist attack on American soil when the Alfred P. Murrah Federal Building in Oklahoma City was blown up by a truck bomb. One hundred and sixty-eight people were killed; 19 of whom were children, 680 more were wounded, and one third of the building was destroyed. Just the night before, after months of Newt Gingrich and the Republican Party had taken over both Houses of Congress, President Bill Clinton held a press conference declaring that the President is relevant. The next morning would prove to the nation how relevant he was to be. 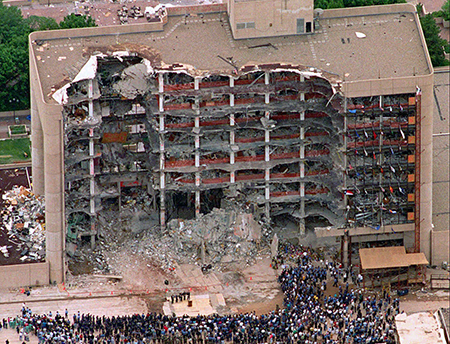 The suspects involved in the bombing were Timothy McVeigh and Terry Nichols. McVeigh, who was a Gulf War veteran had sought revenge on the federal government after the 1992 Ruby Ridge incident and the April 19, 1993 siege at Waco, Texas of the Branch Davidian Compound that killed David Koresh and 85 others, including children. McVeigh had hoped to inspire a revolution against the federal government. He defended the bombing as a legitimate tactic against a tyrannical government. In 1997, McVeigh would be found guilty on all charges where he was sentenced to death. Timothy McVeigh was executed on June 11, 2001 at the Federal Correctional Complex in Terre Haute, Indians. He was 33 years old.John Doe Number Two, later known as Terry Nichols had met Timothy McVeigh while in the Army. Nichols was the kind of guy who would hold short term jobs after being discharged on a hardship discharge. Between 1994 and 1995, Nichols would plan the bombing of the Murrah Building with McVeigh. In Nichols’ 1997 federal trial he was found guilty of conspiracy and use of weapons of mass destruction, as well as eight counts of involuntary manslaughter for the murder of federal law enforcement personnel. Because the jury was deadlocked on the death penalty, Nichols was sentenced to life in prison with no possibility of parole. By 2004, Nichols was charged with 161 counts of first degree murder and one count of fetal homicide, first degree arson, and conspiracy in a state trial held in Oklahoma. Because the state jury too was deadlocked on the death penalty, Terry Nichols was sentenced to 161 consecutive life sentences with no possibility of parole.

Because children were killed in this attack, President Clinton had the First Lady join him in the Oval Office for his Saturday Weekly Radio Address. Unlike previous radio addresses, the Clintons had area children sit in with them. After the address, the First Couple wanted to talk with the children, find out their feelings. One child suggested planting a tree in honor of those killed. The next day, before leaving the White House for a memorial service, the Clintons did just that.It seems as though presidents have moments that test them. Ronald Reagan before him had the Challenger Explosion, George W. Bush and Barack Obama after him had September 11, 2001 and Sandy Hook. Bill Clinton had Oklahoma City.

In his comments, the President said..." The anger you feel is valid, but you must not allow yourselves to be consumed by it. The hurt you feel must not be allowed to turn into hate, but instead into the search for justice. The loss you feel must not paralyze your own lives. Instead, you must try to pay tribute to your loved ones by continuing to do all the things they left undone, thus ensuring they did not die in vain."  He then quoted the then governor, Frank Keating and his wife, "If anybody thinks that Americans are mostly mean and selfish, they ought to come to Oklahoma. If anybody thinks Americans have lost the capacity for love and caring and courage, they ought to come to Oklahoma."  Those words sum up this collection best.